Recently, the value of Chinese stocks climbed over $10 trillion for the first time, according to Bloomberg’s data. That translates to a gain of $6.7 trillion in 12 months. That is more than Japan’s entire stock market and about 40% of the U.S. market. 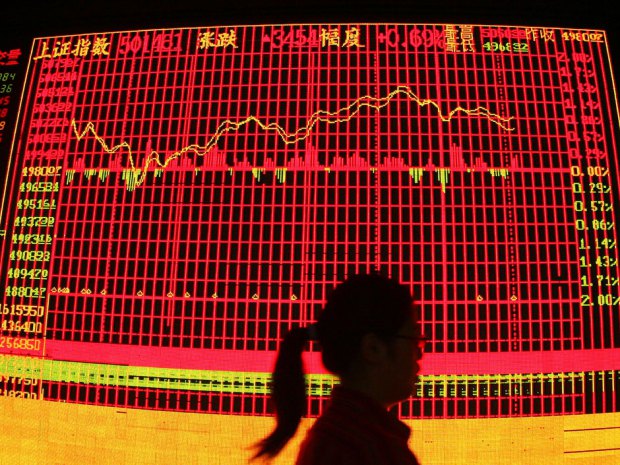 Initially, the markets’ “wealth effect” seemed to support Beijing’s objectives. As the value of state-owned enterprises soared, it was easier for the government to swap debt for capital. By the same token, the soaring markets were seen as a boost for consumer spending and household wealth.

However, as speculation began to get out of hand, economic authorities began to subdue investor enthusiasm by tightening rules on stock purchases with borrowed money. Concurrently, real estate prices exhibited early signs of a turnaround.

Last week, the Chinese market had its most severe weekly plunge since the 2008 crisis. The sell-off peaked on Friday leaving the Shanghai benchmark below 4,500. That translated to a brutal 13.3% fall from the high just a week earlier. Concurrently, the Shenzhen Index fell 12.7% from its seven-year high.

However, as big chunks of money locked up for a glut of initial public offerings (IPOs) will be released in the coming days, fundamental strategies are not likely to reign in the volatile markets.

To many foreign observers, Chinese markets remain a paradox because they do not behave as expected in advanced economies. I outlined the reasons for and the potential of the “Chinese market mystery” long before the recent market boom.

In January 2013 – before the slowdown of growth – I took a closer look at the discrepancy between China’s economic and market performance. When the World Bank raised its forecast for Chinese economic growth to 8.4% in 2013, the Shanghai Index closed flat, at 2,162. “If China’s economy is rebounding, “I asked, “Why is [the market] responding slowly – and at times negatively – to strong signals of recovery?”

Oddly enough the market capitalization of the Shanghai Stock Exchange was not seen as different from the Canadian markets. With its population of 35 million people, Canada’s average GDP growth rate was barely 0.8% over the last half-century. In contrast, China, with its population of 1.3 billion, had experienced three decades of 10% annual GDP growth. Yet, markets seemed to presume that these two economies were of equal value, which was patently bizarre.

Until 2013 – for half a decade after the global crisis – China’s growth was relatively fastest in the world but markets lingered. Since 2014, Chinese markets have soared, but growth has decelerated.

As a result, critics are convinced that it must crash down. Take, for instance, the recent tweet by Bill Gross, former chief of the massive bond fund PIMCO, that China’s red-hot Shenzhen stocks are the next “short of a lifetime.”

The argument would be persuasive if the Chinese market emulated typical market fluctuations. But it has not behaved according to normal theory.

In 2001, when China joined the World Trade Organization, high expectations caused the Shanghai Index to peak. Yet, subsequent economic expansion was accompanied by a four-year slump in equities prices that halved the market’s value.

After government interventions, speculative traders rushed into the Chinese market in 2006. After a peak of 6,000 points in October 2007, the global economic crisis erupted causing the index to fall by a whopping 65% in late 2008. Thereafter it lingered around 2,000 until August 2014.

It was only then that the market rebounded. Big time. In November 2014, it exceeded 2,500; in May 2015, 4,600; and by early June, 5,200. Meanwhile, China’s economic growth decelerated to barely 7%. Paradoxically, as China’s growth rate dwindled to the lowest in 24 years, its markets more than doubled. This is precisely the reverse of what a Wall Street trader might have predicted.

How did it happen?

A slate of market drivers

In November 2014, the Shanghai-Hong Kong Stock Connect, a cross-boundary investment channel, linked the two exchanges allowing investors in each to trade shares on the other market.

While that served as the proximate trigger, monetary easing served as the cause. With the slowdown of the economy, the People’s Bank of China began to cut both benchmark rates and the reserve ratio requirement.

Some investors still held back, due to concerns about leverage. By January, soaring local debt caused increasing unease in the stagnating property markets. But in March, Beijing initiated a $160 billion debt swap deal in which the local government’s risky liabilities will be replaced with low-interest municipal debt. It lessened debt pressures and reduced risky premiums, thus boosting investor sentiment.

Furthermore, Beijing has initiated a series of huge infrastructure projects that can fuel markets for years to come. The “One Belt, One Road” initiative has potential to uplift modernization in China and its regional neighborhood.

These massive initiatives will be supported by the Asian Infrastructure Investment Bank (AIIB), while the New BRICS Development Bank seeks to fund their counterparts in emerging economies.

Both development banks will contribute to the internationalization of the renminbi as Beijing is getting close to its full convertibility on the capital account and the International Monetary Fund is mulling its reserve-currency status.

Moreover, China’s huge reform agenda – particularly the impending financial-sector reforms – is supporting the mainland’s markets, which is seen as vital to rebalancing growth from investment and exports to consumption and innovation. “If these measures are supported by gradual financial reform,” I concluded in January 2013, “Chinese stock markets’ value could finally deliver their promise.” The past year offers a glimpse of that future.

Chinese retail investors, who are willing to take extraordinary risks, have mainly been behind the recent expansions in Chinese markets. A year ago, they still shunned the markets. Today, they don’t want to be left behind. While their motivations are not always rational, they are not acting fully irrationally either. As long as the property markets were booming, retail investors sought fortunes in the overheated real estate. After last year’s contraction, household wealth has moved to equity assets.

However, last week’s plunge suggests that back steps are necessary as well. If growth stabilizes, the government would be less inclined to support institutions seen as unsustainable. If the property market would recover earlier than anticipated, it would mean rising inflation, which could result in higher rates. In the fall, the Fed’s rate hike could trigger a correction – and so on and so forth.

Chinese markets are not for investors with a weak stomach. In the past, these markets undershot. Now they are overshooting. That’s how markets behave. And as long as retail investors dominate, Chinese markets will remain more volatile than their counterparts in advanced economies.

However, it is also true that we have glimpsed only a fraction of the huge potential of China’s ultimate financial expansion.