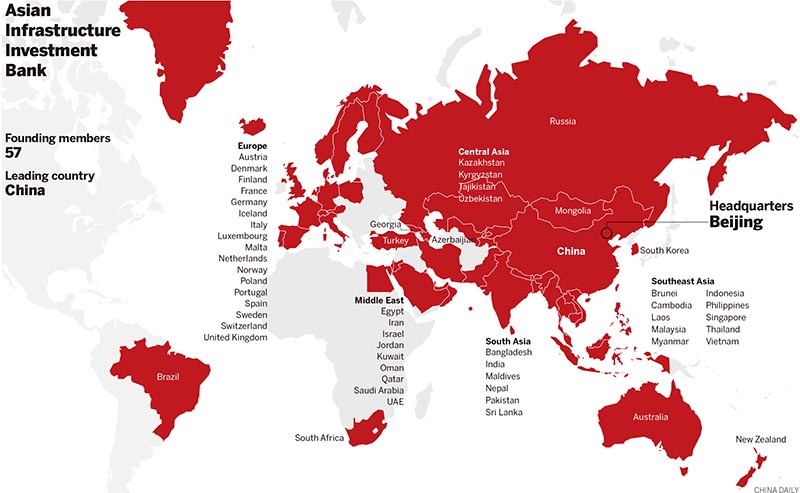 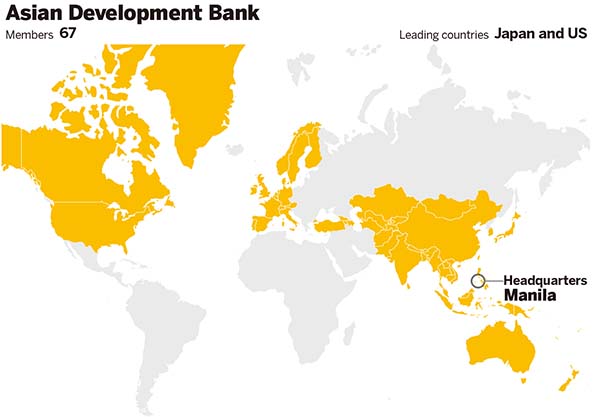 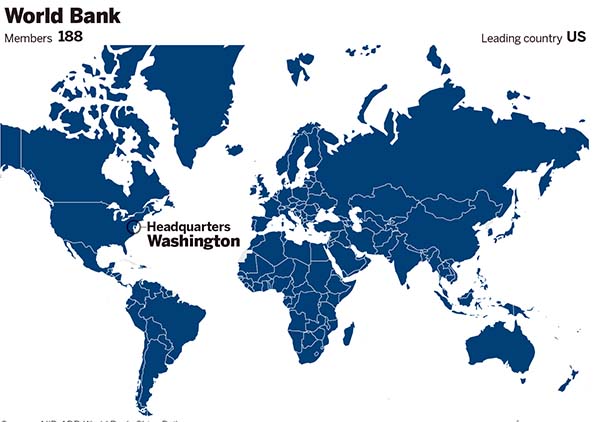 The Asian Infrastructure Investment Bank, with 57 countries confirmed as founding members, has created a new conception for global financial governance. Within an open and inclusive framework, the AIIB is open to all Asian countries and other economies, does not set any conditions or threshold for cooperation, and does not exclude nor target any third party. In a broader sense, the AIIB is redefining the global economic order and the “competition-cooperation relationship” in the governance framework.

Since the initiation of this bank, countries around the world have showed different attitudes and stances towards it — some opposing it, some supporting it, some remaining cautious toward it and some fence-sitting about it. It is only natural that different countries take varied stances, because they choose to understand it in the perspective of their own national interest.

In terms of size, the AIIB, with a planned initial equity capital of about $100 billion and an initial subscribed capital of about $50 billion, is still far behind the Asian Development Bank and the World Bank, with $165 billion and $280 billion in paid-in capital, respectively. In terms of members, the AIIB has 57 founding members, far fewer than the ADB, which has 67 members, and the WB, which has 188 members. What is really encouraging, however, is that the AIIB could win support from 57 member countries in just one and one-half years in its preparations from October 2013 to April 2015. How could the AIIB win such widespread trust in such a short time?

At present, there are major bottlenecks hindering global economic development, including the strikingly varied levels of economic development among the countries, the imbalance of finance in the allocation of resources, inadequate sustainable financing capability and a lack of cross-border supply of public products. And there are more challenges ahead.

First, there are many international financial institutions that serve as positive driving forces (for development), but their investment into infrastructure construction in Asia is quite limited due to their preset functions and roles of the traditional financial institutions and financing models. For instance, the ADB and the WB, as multilateral development institutions, all focus on global and regional poverty alleviation. According to estimates made by the ADB, infrastructure construction in the coming decade in Asia will call for an investment of $8.22 trillion, meaning that $820 billion new investment in infrastructure will be needed each year during the period. Based on the 2013 figures, however, the combined total GDP of Asian economies excluding China, Japan and South Korea was only about $8 trillion. According to the World Bank statistics, the ratio of gross capital formation rate to GDP among the medium- and lower-income countries was only about one-quarter of their GDP, and of that amount, only about 20% could be used for investment in infrastructure construction, that is, about $400 billion. Therefore, there is an enormous shortage of financing for infrastructure investment.

And third, there exist fundamental differences between trans-regional connectivity projects and large infrastructure projects within a particular country. For regional or sub-regional connectivity projects such as the trans-Asian highway and trans-Asian railways, although they have been in discussions for many years, little substantial progress has been made to date because they involve many countries, call for huge investment and produce little returns in any short term. They could be materialized only with coordination and capital input by multilateral development institutions.
The founding of the AIIB will not only help build a powerful “capital pool” needed for infrastructure construction and consolidate the infrastructural foundation to drive economic growth, but also help elevate the capital utilization efficiency throughout the “One Belt, One Road” countries, Asia and Europe and the world as a whole, thus promoting the connectivity construction within and outside the region.

In addition to China’s existing investment funds, there should also be other ways to stimulate investment, including issuing long-term bonds, resorting to various other innovative financing tools and mobilizing private capital. Through such models as public-private partnership, it is hoped that private investors’ interest can be stimulated in the infrastructure projects.

And as for some infrastructure projects that require enormous amounts of investment, they could be implemented through such channels as long- and medium-term loans from international financial institutions, fiscal funds from the governments, sovereign wealth funds, pension funds or “co-financing” by financial institutions.

The AIIB is intended to serve the China-initiated “One Belt, One Road” economic strategy, and is not meant to challenge or topple the world order now dominated by the United States. The AIIB is a constructive supplement to the existing multilateral international financial institutions.

The creation of the AIIB, therefore, could be described as a natural result from the geopolitical mindset still held by traditional multilateral financial institutions and their inertness to reforms. The AIIB thus shoulders a historic mission: strengthening the capability of resources integration, improving financial efficiency and bettering the global financial governance structure.

No doubt, the goals and missions, member composition, share distribution, organizational structure and governance structure all should follow the operating norms and high standards of existing multilateral development banks. For China, an emerging and developing economy, they will constitute new and unprecedented challenges.