China, Geoeconomics and the Problem of Leaderless Thought 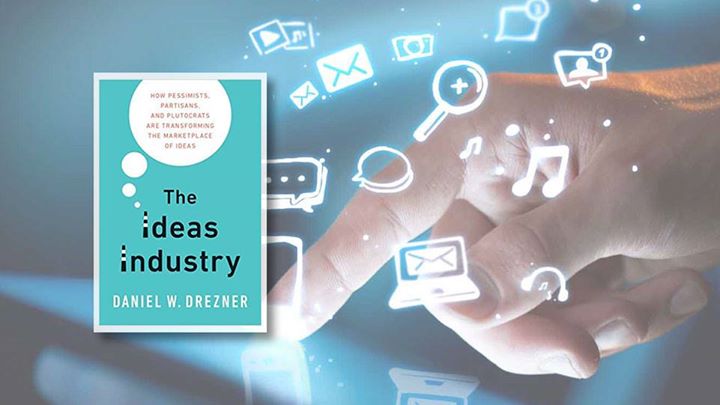 Daniel Drezner’s Ideas Industry is a sobering and timely analysis of the dysfunctions of what he calls the “marketplace of ideas” in foreign affairs. Focused on the United States, Drezner explains how traditional foreign policy experts from such backgrounds as academia, in particular political science, and from well-established think tanks have lost ground to a range of newer, flashier and more entrepreneurial thinkers and institutions. Drezner laments that while this transition reflects new sources of supply and demand for foreign affairs ideas, not to mention the digital technologies that allow ideas to be communicated more rapidly and readily than ever before, the quality of ideas newly on offer is all too often superficial and self-serving.

Drezner argues that once-influential public intellectuals, who especially during the Cold War had the ear of the American public as well as policy makers, are rapidly being outmatched and superseded by what he calls “thought leaders”. Writing with crisp analytical style, touched with a biting sense of humor, Drezner is nevertheless clearly disturbed by much of the superficiality, bordering on charlatanism, proffered by the various thought leaders that he sketches. For the reader who walks away from Drezner’s trenchant critiques anywhere near as concerned as Drezner himself, the question is: how can intellectuals and institutions that seek to engage the public sphere with high quality ideas based on rigorous research make their voices heard against the din of superficial partisan punditry?

As the Financial Time’s Edward Luce has remarked in his own review of the Ideas Industry, Drezner’s answers to this important question may taste like “thin gruel” as they offer few solutions to the structural transformations that Drezner himself explains. Yet Drezner, himself a professor of international relations who is also a senior fellow at a traditional foreign affairs think tank, does not advocate throwing in the towel in the face of the onslaught of mediocrity issuing forth from many of today’s thought leaders. As much as anything, Drezner’s book points out the need for more careful, critical analysis of what all too often are simplistic, easy answers to what are almost always much more complex foreign policy issues and challenges. A brief look at China and US-China relations points to evidence of exactly some of these dynamics as well as some ways forward for individuals and institutions committed to some of the traditional public intellectual ideals Drezner fears are being lost in today’s Ideas Industry.

Start with China and a topic of keen interest to Drezner in his own academic work: economic statecraft. Just in the past five or so years, it has become common to hear talk of China’s rising “geoeconomic” might and strategic prowess. Ostensibly meant to highlight the linkage between the economic and geopolitical aspects of China’s expanding global role, a key focus of many discussions of Chinese geoeconomics has been the country’s high-profile economic development initiatives like One Belt One Road (OBOR) and institutions like the Asian Infrastructure Investment Bank (AIIB). Some such discussions, often in op-ed or short think-piece format, have been initiated by institutions and thought leaders highlighted in Drezner’s Ideas Industry. For example, in 2016 the World Economic Forum published a white paper on “Geoeconomics with Chinese Characteristics”, which included a short piece from, among others, political risk analyst Ian Bremmer.

Yet the distinguishing features of almost all discussions highlighting Chinese geoeconomics have been a failure to carefully define the concept of geoeconomics, a failure to carefully measure and evaluate how well or how poorly China is employing its geoeconomic tools, and an almost complete disregard for the rich academic and historical record surrounding the concept of economic statecraft. One would, for instance, be hard-pressed to find an example of a discussion of Chinese geoeconomics that references Drezner’s work on economic statecraft and sanctions despite its obvious relevance to broader discussions of the relationship between economics and geopolitics and specifically to understanding the carrots and sticks states have tended to use as part of their economic diplomacy.

All of this amounts to what might be called leaderless thought: when concepts and conventional wisdom about China and its role in world affairs take on a life of their own with far too little careful and critical reflection. It is exactly on such issues where there is a clear opening, and in fact an imperative, for the more traditional academic and think tank public intellectuals, exactly those who Drezner says are on their heels, to step into the ideational arena. Such engagement is all the more urgent because the type of flabby thinking associated with such concepts as geoeconomics is increasingly finding its way into U.S. policy discussions about China. [1]

Ill-conceived but catchy buzzwords like geoeconomics are closely linked to a growing sense that China is best characterized as an all-knowing, all-powerful practitioner of neo-mercantalism and that the U.S. must respond with its own version of mercantilist trade policies and other forms of “reciprocity”. But even if China has carefully created a comprehensive, long-term domestic and foreign-affairs strategy intended to leverage state control over its economy and key commercial actors like state-owned enterprises (a dubious characterization at best), then at the very least we should pay keen attention to whether and how China is able to effectively implement such a comprehensive strategy.

Flimsy, but increasingly popular, understandings regarding China’s rising geoeconomic capability and influence too often go un-scrutinized and yet are closely aligned with arguments by a rising chorus of voices that insist that the U.S. must engage China in a form of commercial warfare in order to exact “reciprocity”. But what if, for instance, China is sometimes or even very often ineffective at not only its efforts to create industrial strategy at home but also in its efforts to use instruments of economic coercion abroad? If China’s capacity for effectively formulating and implementing its version of state capitalism at home and abroad is far less coherent and competent than is increasingly assumed, then a U.S. policy based on a deeper and more nuanced understanding of such Chinese industrial strategy and economic statecraft (in)coherence and (in)competence is necessary before embarking on a path of toward what Steve Bannon had declared as the “economic war with China”.

In fact, for those looking to combat the forces of mediocrity that hold sway in Drezner’s Ideas Industry, maybe the metaphor of a competitive ideational arena, where concepts and analysis must demonstrate their viability, may be more appropriate than that of a marketplace for ideas. And if geoeconomics in particular is a case of leaderless thought, where an increasingly popular but vague concept has been allowed to take on a life of its own with little critical evaluation, then academics, think tanks and also traditional funding institutions should be on the frontline supporting, presenting and advocating for careful, in-depth research, the outcomes of which reflect meticulous critical reflection and feedback.

To date, however, such a response has been minimal and slow. The reasons for the lethargic response are multiple and complex, but key among them is a problem of “silos” that continue to separate economics-focused research from geopolitical and security-focused research on Chinese foreign affairs. Clearly the concept of geoeconomics, implying as it does a melding of economics and geopolitics, is itself a seemingly common-sense response to such silos. Yet rather than a self-conscious and careful effort to understand what, say, a country’s global “economic power” might mean, most discussions of geoeconomics assume the meaning of the concept is self-evident and almost completely ignore rich veins of scholarship and historical policy on a range of related issues.

Instead, a proper response to the type of leaderless thought that has allowed fuzzy thinking about Chinese geoeconomics to flourish must begin with a much-improved effort to extend the insights of academic studies of international political economy (IPE). Such a response, building on the basic insight of geoeconomics that there is a need to understand the reciprocal and dynamic interaction between economics and geopolitics, should begin with the rejuvenation of more robust and time-tested analytical concepts like economic statecraft. It should also include drawing lessons from America’s own experience of developing from a country whose economic size initially far outpaced its effective, strategic use of power and influence on the global stage.

Reading Daniel Drezner’s Ideas Industry should cause the blood to boil of not just the relatively few who aspire to play the role of public intellectual, but to all those individuals and institutions who, in the face of the easy solutions and borderline charlatanism on offer by many of today’s thought leaders, are committed to contributing careful, constructively critical ideas to the sphere of public opinion and policy. Nowhere is this more needed than in the arena of US-China relations, and nowhere is it more needed than in the sphere of research and public policy regarding the intersection of China’s growing foreign economic and geopolitical role.

In the end, Drezner’s book should be read as a call to thoughtful action. To paraphrase Martin Sheen as Captain Willard in Apocalypse Now, if Drezner’s Ideas Industry is really a biographical confession of both angst and aspiration, then so is this book review.

[1] In fact, China scholar Iain Johnston has made a cottage industry out of challenging memes about China’s new assertiveness or rising nationalism. For example, his most recent piece on Chinese nationalism is here: http://www.mitpressjournals.org/doi/abs/10.1162/ISEC_a_00265.

GeoeconomicsAIIBChina’s Economy
printTweet
You might also like
Back to Top
CHINA US Focus 2018 China-United States Exchange Foundation. All rights reserved. Disclaimer