False Narratives on Trade with China

The following is the transcript of Mr. Stephen Roach's speech at the Forum, which has been edited for style and brevity. 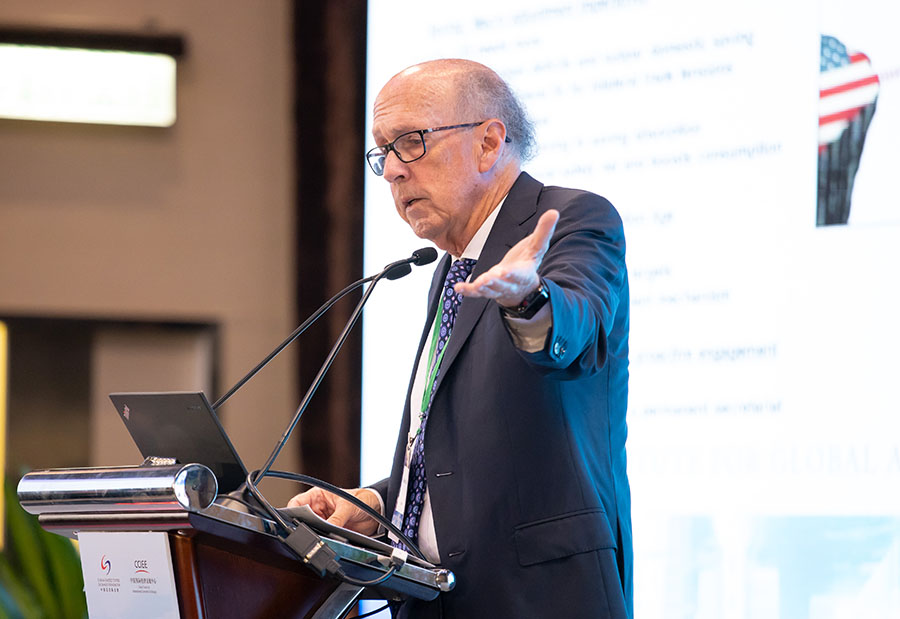 Mr. Stephen Roach made the speech at the ‘U.S.-China Trade & Economic Relations: What Now, What Next’ Forum in Hong Kong on July 9, 2019.

This one is penchant to holding others accountable for problems that we are either unwilling or unable to solve ourselves.

Prime Minister Fukuda actually offered an interesting perspective precisely on that point: we focused our energy in this blame game 30 years ago on Japan, and now we're doing it again to China. The question is, why? Why do we need to hold others responsible for problems that we should be able to deal with more effectively ourselves?

Let me just start with an elementary point of macroeconomics that we teach undergraduates in the second week of their introductory course in econ. And that is: investment must always equal saving, and when you don't save, and you want to grow, you import surplus savings from abroad, and you run a big balance of payments deficit to attract the foreign capital. This is not sophisticated economic theory.

With that current account deficit comes trade deficit with many, many countries. It’s a multilateral trade problem.

We teach this at Yale, we teach this at every major university in the United States. Unfortunately, Yale failed in being able to teach that to a number of senior cabinet officials in the Trump administration who are charged with economic policy.

The savings rate for the nation as a whole was less than 3% last year. That's the savings we have left over from businesses, households, and the government sector to fund the growth in our capital stock. And there basically isn’t any. So we run current account deficits every single year since 1982, with the exception of one: 1991, to attract the foreign capital.

Under the Trump tax cuts in late 2017, it is going to go from bad to worse.

There is a list of the countries that we run trade deficits with. There were 102 of them last year. China was the biggest with 48% of the total merchandise trade deficit. The smallest: The Vatican.

The point is that if we don't address the savings problems, and we close down trade with China, the Chinese pieces will just get spread through trade diversion to other countries on the list. Higher cost producers then will tax the American public.

So the macro is clearly a key lightning rod in the false narrative that is perpetrated day in and day out by the President and the Congress.

The US Trade Representative Robert Lighthizer issued a report in March 2018 that laid out in great detail – 182 pages and 1,139 footnotes – the structural case for America's new aggressive policy against China. (Findings of the Investigation into China’s Acts, Policies, and Practices Related to Technology Transfer, Intellectual Property, and Innovation under Section Under Section 301 of the Trade Act of 1974)

It made the case for violation of intellectual property rights, forced technology transfer, China's predatory outbound M&A policy, and gobbling up innocent U.S. technology companies. The report argued that China was alone in embracing state-sponsored industrial policy and talked about cyber hacking, namely the prominent role that China plays in industrial espionage through illegal cyber means. Much of the USTR’s report draws on evidence assembled by the IP Commission, headed by two illustrious Americans: Former US Ambassador to China, John Huntsman, and retired Admiral Dennis Blair. They laid out a series of estimates said that the US was losing between $200 and $550 billion of intellectual properties a year predominantly from China.

I have looked at the evidence from this report that Mr. Lighthizer assembled: it would not be admitted in a U.S. court of law. It’s weak evidence.

Just one example of that forced technology transfer, which is the lightning rod of this structural debate: U.S. companies get involved in joint ventures, and they're forced to turn over their proprietary technology to China.

On page 19 of section 301 report, the US Trade Representative admits that he has no hard evidence at all for that allegation. Instead he relies on proxy evidence from the US-China Business Council that suggests some companies are uncomfortable in dealing with China on technology grounds. As weak as this case is, it has become the foundational evidence for the President, who says, “I am a tariff man, I like tariffs”.

The view of the tariff man is ahistorical at best. It completely overlooks the devastating role that tariffs played in the 1930s – the catalytic role of transforming a pretty tough recession into the Great Depression. Back in 1930, when the tariff war played a catalytic role in causing the Great Depression, the trade share of the US (Gross National Product) GNP, as we called it back then, was 11%. Today, it's 28%. Our economy is much more vulnerable to a trade shock today than it was back then. Secondly, in the New York Times issue of May 5, 1930, over 1000 leading economists in the United States wrote an open letter to then President Herbert Hoover urging him to veto the tariff bill that was on his desk. President Hoover, like the President we have today, says, “I know more than experts. I am a stable genius.” Then he signed the bill, and the rest is history.

I’ve been critical of my own country, but I'm not letting China off the hook. There are a number of issues that need to be addressed in China, from dealing with productivity and supply side efficiencies, state-owned enterprise reform, the debt intensity of the growth model, and the innovation challenge. China has a number of critical issues, and the risk is by going tit-for-tat with the US on tariffs and trade restrictions, you lose sight of your compelling domestic agenda. My advice for China is: please do not be distracted. The trade threat from the United States is a serious problem, but these problems are far more serious for longer term, sustainable economic growth and development in China.

The United States is very fearful of a great challenge to its role as the world's leading innovator. And you know, with good reason: traditionally it saves short economies who don't have the domestic wherewithal to fund domestic investment, which is critical to drive R&D and innovation. And as I showed you earlier, our saving shortfalls are very worrisome in that regard. Moreover, if you look at the Global Innovation Index, there's convergence coming from China. The U.S. has characterized China's innovation challenge as an existential threat. The President's leading advisor on trade, former Professor Peter Navarro, has said in no uncertain terms that China is threatening America's emerging industries of the future, and without those industries, we will have no economic future. It’s a very deep and worrisome fear if that is, in fact, correct. There are existential fears on both sides of the debate.

The US has existential fears of its own primarily concerning innovation, technology, and the future of our prosperity.

I'm not too optimistic about where we're headed. I'm not going to sugarcoat what happened in Osaka. It's nice that they shook hands, but there was a grimace to the handshake.

There are those who conclude that if we're going to have a protracted conflict, it’d be reminiscent of a different type of Cold War. The first Cold War was more of a military conflict between two superpowers; this one, potentially more of an economic conflict. I hope not. The prevailing view in America is that we're good at Cold Wars – we won the first one, and we’ll just win the second one. I have one word for that: wrong.

If you look at the economic strength of the United States today versus what it was during the 1947 to the 1991 period, Cold War 1.0. On all three metrics – GDP growth, saving, and productivity – the US today is performing far, far more deficiently than it was back then.

Let me just close with giving you a few of mine.

Number one: we need to improve market access in both nations to each other. The best way to do it was the framework we were engaged in for 10 years, which has now been aborted – a bilateral investment treaty (BIT). China has 145 bilateral investment treaties. United States has 42 of them. Around the world there are 3,000 of them. There was a framework that had been under way in Bush II and through the Obama administration that got us this close, and we've abandoned it.

Number two: savings. Both nations should really commit to serious macroeconomic adjustments. The U.S. needs to save more. By saving more we reduce our natural bias toward the trade deficits. It is the only way we can get a multilateral fix to our macro economy. China needs to save less; we know that, and China’s savings rate is coming down, but it needs to come down more to fund the social safety net to encourage internal private consumption.

Cyber: everybody hacks, China hacks, the U.S. hacks. Cyber is not a bilateral problem, it's a multilateral problem. Why can't the two largest economies in the world show some joint leadership in forging a global multilateral cyber accord with a dispute and enforcement mechanism that resembles another multilateral organization?

And finally, the dialogue. We used to have biannual strategic economic dialogue, and then it became an annual one, and now we have only one dialogue in the current administration. We need a more permanent organization to house experts from both sides working full time on issues of mutual significance and importance. And a permanent Secretary would go a long way in giving much more of a robust framework for engagement.

China-U.S. Economic RelationsU.S.-China RivalryBIT
printTweet
You might also like
Back to Top
CHINA US Focus 2021 China-United States Exchange Foundation. All rights reserved.