Recently, the global stock market, foreign-exchange rate market and the commodity market all went through a big volatility. Some believed that the Chinese economic slowdown shocked the world and opinions bad-mouthing China were rampant. However, in today’s economic globalization, China’s economy and the world economy are increasingly depending and acting on each other. 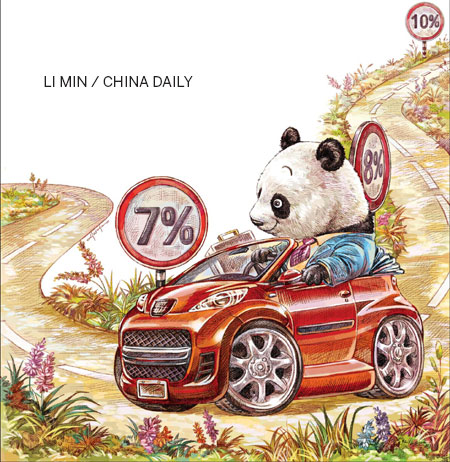 China’s economy has recently faced stronger downward pressure. Domestic demand grew slowly because of China’s economic restructuring. In addition, the impact of weak overseas demand should not be overlooked. China’s export growth rate has dropped from 20% since China’s entry into WTO to a single digit rate in recent years and even had a negative growth this year. In addition, the expectation of a US interest-rate increase has caused the capital outflow, currency depreciation and the financial turbulence in most newly emerging markets including China. Meanwhile, the recent US stock market decline was mostly caused by technical adjustment after the constant growth for three consecutive years. Overall, China’s current employment is basically stable and consumer prices are growing moderately. China’s economy remains to be one of the fastest growing economies and a major economic growth engine for the world.

I. China’s economic slowdown is the consequence of the overlapping short-term weak demand and the mid-term restructuring

At present, China’s economic slowdown is the consequence of a combination of many factors. Judging from the short-term cyclical factors, the world economic recovery is slower than expected, causing an obvious lack of Chinese overseas demand; the substantial appreciation of the RMB’s real effective exchange rate further depressed export growth; factors such as enterprises’ poor profit prospect and delisting caused an investment deceleration; the adjustment of the two leading markets of real estate and autos led consumption to a slight decline.

From the prospective of the mid-term structural factors, the pains from the current pressure of China’s economic change of gears and structural adjustment interweave. The growth of new industries failed to offset the declining impact of the traditional industries. Things like the weak support of essential industry investment, the improved structural updating, adjusting for overcapacity and the intensified ecological environment protection all can affect economic growth.

In terms of the government performance, although Beijing has made great efforts to promote administrative streamlining and institute decentralization, reform has not been fully carried out. The low administrative efficiency of some sectors and local governments has dampened the policy implementation. Moreover, the policy of promoting steady growth has not been executed fully due to the lazy workstyle and non-performance of some local officials.

II. China’s slowing down of its potential economic growth is in line with the inherent economic law

Now, China’s economic development has stepped into a new normality. Its economic growth is turning from a high rate of around 10% to a moderate rate of about 7%. The structure of the essential factors shows that with the change of demographic structure, the total working-age population (age 16 to 59) has begun to decrease, which makes a negative contribution to the economic growth; with the end ofdemographic dividend peak, saving rate begins to fall and the capital accumulation contribution to economic growth begins to get weak; with the comparative advantages weakening, export trade slows down substantially, the technical spillover effect dwindles and the shift effect of labor force from the country to the cities abates while technological progress and labor capital are stable in the short-term, thus the total factor productivity will also show a slowing momentum in the short-term.

Therefore, the structure of essential factors, economic aggregate and industrial structure all tell that the gradual shift to a medium-high speed development in China’s economy conforms to the inherent economic development law. One must realize the logic for China’s economic development for now and a certain period in the future is to understand, adapt to, and guide this new normality. Not only the Chinese governments at various levels, enterprises and residents should know this development tendency, but also the international community should understand and adapt to this change. People should not expect the Chinese economy maintaining a high growth rate as normal.

In the first half of the year, although Chinese traditional manufacturing witnessed an obvious slowdown, the manufacturing of such products as robots, electric cars, servers, intelligent terminals and locomotives grew rapidly. Particularly, the fast growth of modern services such as the stock market-driven finance and e-commerce-driven express delivery made a positive contribution to the macro economy. As for the second half of the year, the dramatic shrinkage of the stock market turnover will remarkably lower the financial contribution to the economic development. But with the interest-rate cuts and reserve reductions, with the expenditure expansion and consumption-tax reduction, with the gradual efficiency of a series of steady policies like the major investment project package and consumption project package, with the release of reform dividend, and with the lower cardinal number, China’s economy is expected to keep a small but stable recovery momentum and can reach the expected target of about 7% GDP growth this year.

IV. China is still a major engine for the world economic growth

China’s economic aggregate in 2014 surmounted USD10 trillion, accounting for 13.4% of the world economic aggregate and ranking second in the world. Now, although China’s economy is under a big downward pressure, an economic growth of around 7% is one of the fastest in the major economies. What’s more, because of the high aggregate base, 7% growth rate will bring a huge GDP growth. So China’s economy is still a major engine for the world economic growth. At the same time, China is embarking on promoting a higher level of opening up to the outside world, further easing the restrictions on foreign capital access, accelerating the establishment of bilateral and multilateral free trade areas. And with the implementation of the “Belt and Road” initiative in particular, China will reinforce its connections with other countries’ economy. Therefore, China will have a prominent role in driving the world economic growth.

Currently, China’s economy has shifted to a slow gear, having a bigger impact on those resource-exporting countries which highly depend on China’s market, but having no remarkable impact on European and the US economic growth. In particular, China’s slow economy is not the “culprit” of the recent US stock market slump. Instead, the US stock market fall was caused by its excessive high growth in recent years. The expectation for Federal Reserve interest-rate increase means the coming of a tight monetary policy. Since the financial crisis, the Dow Jones Index has risen by 170% and needs a valuation adjustment.