It is tempting to view economic events in China through a single template: the view that they are driven by government intervention because the authorities haven’t learned to let the market operate. After all, Mao’s portrait still hangs on the wall and the Communist Party still governs. But the lens of government intervention has led foreign observers to misinterpret some of the most important developments this year in the foreign exchange market and the stock market. An instance of such misinterpretations is the confused positions of many American congressmen, which have helped bring about the opposite of what they really want from China’s exchange rate. 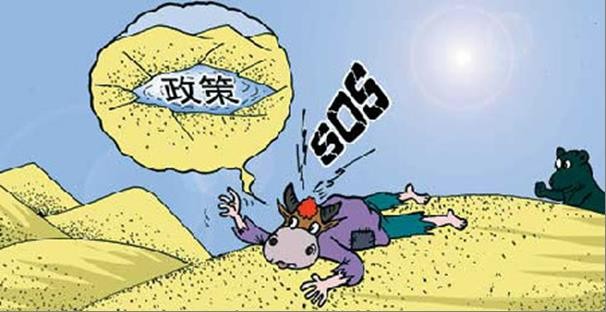 To be sure, Chinese authorities do often intervene strongly in various ways. In the foreign exchange market, the People’s Bank of China intervened heavily during the decade 2004-13, buying trillions of dollars in foreign exchange reserves and thus preventing the yuan from appreciating as much as it would have if it had floated freely. Hence years of U.S. allegations of currency manipulation. More recently, in the stock market, the authorities have deployed every piece of artillery they could think of in a crude attempt to moderate the plunge that began in June of this year.

But some important episodes that foreigners decry as the result of government intervention are in fact the opposite. Two developments this year have dominated the financial pages, but have often been misinterpreted. One is the depreciation of the yuan against the dollar on August 11. The other is the bubble in the Chinese stock market that led up to the June peak.

Intervention in the Foreign Exchange Market

China in August gave American politicians an instance of the adage, “Be careful what you wish for, because you might get it.”  The widely decried 3% “devaluation” of the yuan was the result of a change by the People’s Bank of China in the arrangement for setting the exchange rate, a change that constituted a step in the direction of letting the market decide. This is what U.S. congressmen have long claimed they wanted and, even now, confusedly still claim they want.

The change sounds technical, but is easily described. China’s central bank has for some time allowed the value of the yuan to fluctuate each day within a two per cent band, but has not routinely allowed the movements to cumulate from one day to the next. The change on August 11 was to allow the day’s depreciation to carry over fully to the next day. Thus market forces can play a greater role in determining the exchange rate.

It is probable that China would not have chosen this time to give the market a larger role in setting the exchange rate if market forces were not working in a direction, toward depreciation, that would help counteract this year’s weakening of economic growth.  And, peering within the country’s decision-making process, it is likely that China’s political leaders were primarily motivated by the desire to support the weakening economy while the People’s Bank of China was primarily motivated by its longer-term reform objectives.

But these two motivations are consistent: market forces would not be pushing so clearly in the direction of currency depreciation if it did not correspond to the fundamentals of the economy.    Market determination of exchange rates can indeed serve a useful function, even if the American politicians who demanded that China float did not realize what the result would be.   In any case, if what they really wanted was something different, one can hardly blame the authorities for taking them at their word.

It is said that a year is a long time in politics. A year should have been enough time for American politicians to figure out that market forces had reversed direction in the middle of last year. The People’s Bank of China has spent about $400 billion in reserves since June 2014—about 10 % of its total – to buy yuan in the foreign exchange market. It is no surprise that an end to Chinese intervention would now depreciate the currency rather than appreciate it.

To be sure, China is far from a free-floating currency, let alone from full convertibility of the yuan. Convertibility would require further liberalization of controls on financial inflows and outflows. Unification of onshore and offshore markets, not floating of the currency, is what would be required for the yuan to merit an IMF decision this year to include the currency in the definition of its SDR (Special Drawing Right). Much commentary ahead of the IMF decision underestimated the importance of the criterion that the currency must be “freely usable.”  Increased flexibility alone was not going to be enough to do the trick.

In truth, a 3 percent change in the exchange rate – the size of the so-called “devaluation” against the dollar – is negligible. For example the euro and Japan’s yen have each depreciated far more than this over the last year, against both the dollar and the yuan.

China’s adjustment is said to have triggered a “currency war” of devaluations, relative to the dollar, among a number of emerging market countries. Most of this was due to happen anyway.  It has been at least a year since the economic fundamentals shifted against emerging markets (and especially away from commodities) and toward the U.S. It is natural for exchange rates to adjust to the new equilibrium. The Chinese move likely influenced the timing. But the currency war framework is misleading.

Intervention in the Stock Market

What about China’s stock market? The commentary says not only that the authorities consistently pursued a variety of artificial measures to try to boost the market on the way down but also that they did the same during the huge run-up in stock prices between mid-2014 and mid-2015. The allegation is that the Chinese authorities, particularly the stock market regulator, have not learned how to let the market operate and that they had only themselves to blame for the bubble in the first place.

There is some truth to this overall story. There was some simple-minded cheer-leading of the bull market in government-sponsored news media, for example.

But many commentators have failed to notice that the regulatory authority, the China Securities Regulatory Commission, took steps to try to dampen the last six months of market run-up. It tightened margin requirements in January 2015.  It did it again in April.  At that time it also facilitated short-selling, by expanding the number of stocks that could be sold short.  And the event which apparently in the end “pricked” the bubble was the June 12 announcement by the CSRC of plans to limit the amount brokerages could lend for stock trading.

The adjustments in margin requirements are the sort of counter-cyclical  macro prudentialregulatory policy that we economists often call for, but less often see in practice among advanced economies. Perhaps surprisingly, it is more common in Asia and other emerging markets. A recent study, for example, found that China and many other developing countries adjust bank reserve requirements counter-cyclically.  Another found effective use of ceilings on loan-to-income ratios to lean against excessive housing credit.

Yes, the extraordinary run-up in stock market prices from June 2014 to June 2015, when the Shanghai stock exchange composite index more than doubled, was fueled by an excessive increase in margin borrowing.  Reasons for the increase in margin borrowing include its original legalization in 2010-11; easing of monetary policy by the People’s Bank of China since November 2014 in response to slowing growth and inflation; and the eagerness of an increasing number of Chinese to take advantage of the ability to buy stocks on credit.

Nevertheless, the stock market regulator responded by leaning against the wind.  Similarly, when the People’s Bank of China has intervened in the foreign exchange market over the last year, it has been to dampen the depreciation of the yuan, not to add to it. These are not trivial points.