President Donald Trump says he developed a "friendship" with President Xi Jinping at Mar-a-Lago. However, U.S. missile attacks against Bashar al-Assad's forces in Syria overshadowed the meeting. Apparently, the White House hoped to kill two birds with one stone: to show to al-Assad who was in control and to Xi what might happen to North Korea if China would not intervene more decisively. 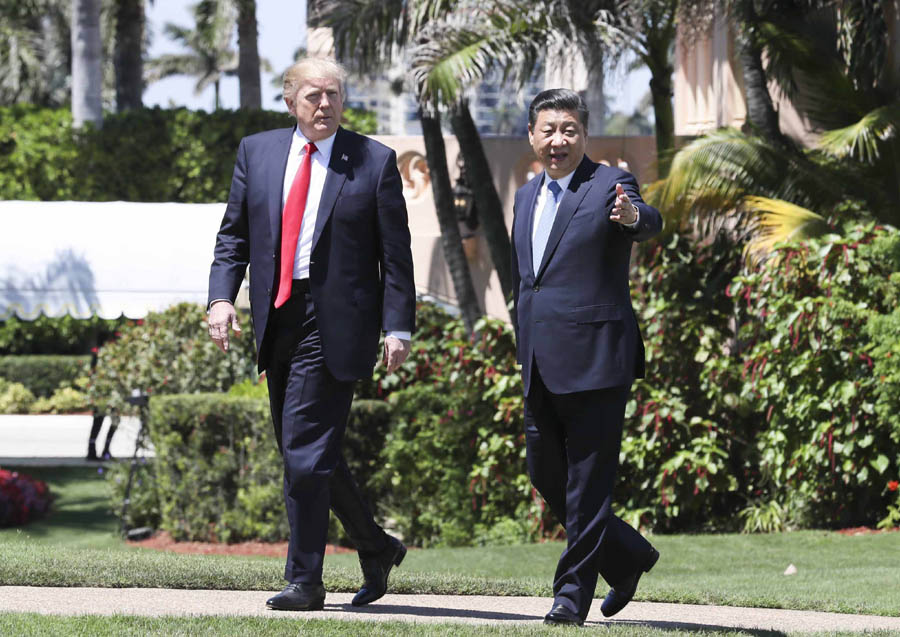 In the process, geopolitics cast a shadow over the meeting's economic agenda, which had evolved after December when State Councilor Yang Jiechi visited Trump Tower and spoke about Chinese core interests. A day later, Trump talked on the phone with Taiwanese President Tsai Ing-wen and suggested that decades-old one-China policy could be used as a bargaining chip.

After a bilateral rhetoric tit-for-tat, Washington and Beijing began efforts to reduce tensions and a complementary channel was opened by China’s U.S. Ambassador, Cui Tiankai, with Jared Kushner, Trump’s son-in-law and trusted senior adviser. In February, these efforts led to Trump’s re-affirmation of the one-China policy, and in March, Secretary of State Rex Tillerson’s Beijing visit where he described the basis for U.S.-China ties as “non-conflict, non-confrontation, mutual respect, and win-win cooperation.” While Democratic and Republican critics saw it as a sign of appeasement, optimists saw it as new a bilateral opening.

The stakes are huge. Starting with Deng Xiaoping’s economic reforms, U.S.-China merchandise trade has grown from $2 billion in 1979 to $579 billion in 2016. Today, China is the U.S.’s second-largest merchandise trading partner, third-largest export market, and biggest source of imports.

During the campaign, Trump threatened to use 35-45% import tariffs against those nations that have a significant trade surplus with the U.S. In the White House, his team has floated 10% tariffs. To signal determination, Trump’s trade warriors – the head of the National Trade Council, Peter Navarro, U.S. Trade Representative, Robert Lighthizer, trade advisor CEO Dan DiMicco, and Secretary of Commerce, Wilbur Ross – have singled out nations that have large trade surpluses with the U.S. In 2016, the deficit list was topped by China ($347 billion), Japan ($69 billion), Germany ($65 billion), Mexico ($63 billion), and Canada ($11 billion).

In substance, Trump's bilateral deficit obsession is a relic from the mercantilist era. Historically, U.S. trade deficits began in the 1970s, not with China’s rise in the 2000s. Moreover, these deficits are multilateral, not bilateral. They have prevailed more than four decades with Asia; first with Japan, then with the newly-industrialized Asian tigers and more recently with China and emerging Asia. However, since Trump won the presidency with his mercantilist rhetoric, he needs perceived deficit concessions.

At Mar-a-Lago, besides the Trump-Xi talks, U.S. cabinet officials held meetings with their Chinese counterparts. Led by the Treasury Secretary Steve Mnuchin, the economic teams had a breakfast meeting on Friday, while a trade meeting included Commerce Secretary Wilbur Ross and Director of the National Economic Council Gary Cohn. It was a Goldman Sachs play. Cohn is the investment bank's former president; Mnuchin, its former hedge fund manager. The two support a tough but more cooperative approach with China.

It is a not-so-secret-secret that the White House’s advisers have been split by internal battles between those Trump advisers (Navarro, DiMicco), who advocate aggressive measures to challenge China on trade, and their opponents (Mnuchin, Cohn), who prefer a moderate tone. While sympathetic to the trade hawks, Ross leans onto the moderates. Like Trump, they know only too well that short-term wins in trade battles could easily be undermined by long-term friction in bilateral relations that could hurt vital U.S. fiscal, monetary, defense, and security interests.

Since 2008, Washington and Beijing have been in talks about a bilateral investment treaty (BIT) to expand investment opportunities in the two countries. While the original goal was to complete an agreement by the end of President Obama’s second term, the latter’s geopolitical plays undermined the investment objective.
Somewhat like China’s membership in the World Trade Organization (WTO) in 2001, China’s pursuit of a BIT with the U.S. offers domestic gains as well. It could accelerate structural economic reforms in the mainland and is very much in line with President Xi’s medium-term goals and the rebalancing of the Chinese economy.
One possible bilateral scenario that has been discussed involves Chinese investment in U.S. infrastructure, including bridges, roads and airports. Beijing is interested in such prospects, but the Trump administration would still have to reconcile such ideas with its “Buy America” doctrines.

While the BIT would certainly facilitate investments in the two nations, it would support Trump’s infrastructure initiatives. Nevertheless, the Trump administration would have to portray it as a trade pact that would not result in U.S. jobs being offshored to China.

Toward a compromise trajectory

Before the Summit, the White House hoped President Xi would in some way address Trump’s concerns about the U.S. trade deficit with China. For instance, Beijing has pledged to reduce overcapacity in steel, but the central government has not yet engaged in broad plant closures. Instead, local governments, which depend on factories for taxes and employment, still maintain substantial production levels.

If these issues were addressed behind closed doors, the Chinese negotiators may have reassured the Trump advisers that broad-scale plant closures are in the agenda but that likely to ensue only after the Chinese politburo summit in the fall.

Tough economic reforms require political consensus in both China and the U.S.

Like the Reagan administration did with Japan in the 1980s, the Trump administration may also have hoped for a deal in which China would “voluntarily” agree to limit production and exports to carry out its pledges about overcapacity and to ease trade tensions. However, China is neither Japan nor dependent on the US alliance system in Asia Pacific, as Japan is. Moreover, U.S.-Chinese trade involves much more than autos and consumer electronics. Consequently, incentives for voluntary restraints are marginal.

After the two-day summit at Mar-a-Lago, the U.S. and China announced a 100-day plan to improve strained trade ties and boost cooperation between two nations. Trump negotiators characterized the first Trump-Xi Summit with references to “positive” chemistry.

Reportedly, China will offer better market access for U.S. financial sector investments, while ending the ban on U.S. beef imports that has been in place almost 15 years. While Washington would like Beijing to lower the 25% tariff on automotive imports, Beijing would like Washington to relax restrictions on advanced technology sales to China. Meanwhile, the Trump administration is preparing an executive order that would probe dumping from foreign companies and could result in tariffs, while steel and aluminum will be targeted.

While such concessions represent relatively modest progress in bilateral relations, Commerce Secretary Ross believes both sides agreed to speed up trade talks to recalibrate their bilateral imbalance: “This may be ambitious, but it’s a big sea change in the pace of discussions.”

Before the Trump-Xi Summit, some felt it was premature and could undermine recent progress in bilateral relations. Others saw the meeting as a window of opportunity that should not be missed – as happened in 2013 in Sunnylands, California, when Obama rejected Xi’s offer of “new type of major power relations.”

The simple reality is that, without efforts at stabilization in the U.S.-Sino relationship, aggressive bilateral rhetoric could derail more than four decades of bilateral normalization. As Xi said at Mar-a-Lago: "There are a thousand reasons to make the Sino-U.S. relationship work, and no reason to break it."

That's where the Trump-Xi Summit did succeed – it paved a way for a sustained dialogue and potential compromise trajectories, despite differences.