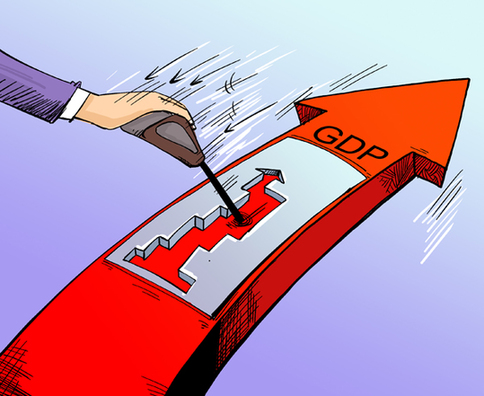 On Jan. 19, the National Bureau of Statistics announced the 2015 GDP figures, showing that China’s gross domestic product amounted to 67.67 trillion yuan, marking a year-on-year growth of 6.9% on comparable prices. This rate was the lowest level in a quarter-century, and many began to worry about such a slow growth pace. In fact, there was nothing to worry about. First, given the size of China’s GDP growth, it was natural for the growth rate to slow. Second, the slowdown marked the progress being made in the economic structure adjustments, and also showed a return to normalcy of the economy from an ailing status.

The second factor was a drop in exports in 2015. Data showed that China’s exports registered negative growth last year. As one of the three drivers for economic growth, a decline in the export growth rate naturally affected the growth of the economy. Since China joined the World Trade Organization in 2001, China has experienced unprecedentedly fast growth rates in exports, and immediately became a driving force for China’s economic growth. Due to the fact that China’s exports were mainly low-end products and materials, such fast growth in exports naturally led to an imbalance with environmental protection and labor resources, and such fast growth could not be sustained. However, this also showed that the structure and driving forces for China’s economy are in the process of transition, showing that the economic re-structuring was well underway. This is a good thing. The market should not have worried about or overreacted. At the same time, it was also an encouraging sign that growth in the services industry and consumption was faster than other factors, more proof that the structure is improving and heading in the right direction.

Therefore, there is no need to worry, because two fundamentals propping up the Chinese economy are unique and no other economies could possibly match them. First, the market economy has taken root across the country and the Chinese economy has distinctively regional differences. For example, the economy of the eastern coastal regions has reached the levels of advanced economies, but the economic level of many central and western regions are yet to reach the level of the eastern coastal regions in the 1980s and 1990s. Such big regional differences in economic development have made the Chinese economy highly inclusive. If a problem – even a crisis – occurs, it is always a regional issue and has little impact on the overall picture. This helps lay a solid foundation for future economic growth.

The second fundamental is the Chinese market of 1.4 billion consumers — the envy for all countries in the world which none could match. Due to regional economic differences and inequality in income distribution, this means that the Chinese market is not only big but also diversified and elastic. A product may have consumers from different income groups. For example, a bottle of water may be sold for 1 yuan, and could also be sold for dozens of yuan, depending on the consumer groups. Such a resilient market also helped create unprecedented opportunities for Chinese enterprises and the economy as a whole.

Because China has such distinctive advantages and conditions that no other countries have, China will be able to solve and tide over any difficulties and predicaments in the economy. At present, as long the Chinese government could stay sober-minded and have a clear understanding about its capability, and avoid or minimize policy mistakes, the slowdown in China’s GDP growth should not be worried about at all. Even if the growth rate slows down to 6%, it will not be a problem — and the growth rate was still at 6.9% last year. My concern would be that the Chinese government, in an attempt to pursue higher GDP growth, would again re-embark on the road of an economy driven by real estate.