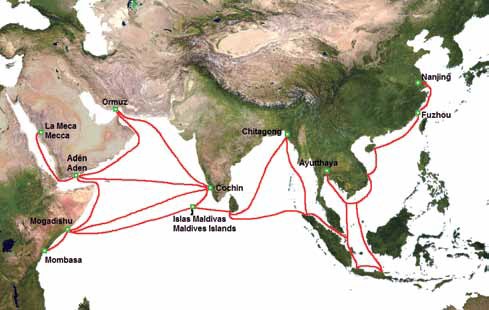 Today the Maritime Silk Road is truly global in scope. China has established a $40 billion fund for the Maritime Silk Road, for ports and related infrastructure, not only along the old route of Zheng He, but now extending into Europe and even into the New World. A Chinese construction firm from Hong Kong is overseeing a new “Panama” canal in Nicaragua, to allow huge tankers which cannot pass through the current Panama Canal, to travel between China, and Brazil and Argentina.

The Chinese are now considering support for the effort to build a canal in southern Thailand, the Kra Canal, a campaign supported by Lyndon LaRouche for the past 40 years, which would turn the region into a hub for the development of the entire Pacific and Indian Ocean basins.

Because of the Suez Canal—and especially with the completion of Egypt’s second Suez Canal—the Chinese Maritime Silk Road can now pass through the Red Sea to the Mediterranean. Already, China’s huge shipping firm COSCO has a 35-year concession in the port of Athens, Greece, at the Piraeus Container Terminal, managing the two main container terminals at the port—one of Europe’s busiest.

Li Keqiang, the prime minister of China, went to Belgrade, Serbia in December for a meeting with 16 countries from central and southern Europe, where they put in motion a plan, which is already being implemented, for high-speed rail connections from the Piraeus port up through Macedonia, through Serbia, Hungary, and into Western Europe. It is expected to be on line by 2017.

Now, think about what’s going on in Greece, and how the Greeks look at this. On the one hand, they’re being told by the Troika (European Commission, ECB, IMF) that 50% cuts in pensions are not enough; they have to cut the pensions more; 60% youth unemployment is not enough— they have to stop employing people, all to meet the austerity conditions to make them “worthy” of new loans, loans which will never even make it to Greece in any case, but simply be transferred from one account to another back in the U.K. or in other Eurozone banks, because they are only intended to pay off debts. Debts that can’t be paid, and that are, in fact, illegitimate and should not be paid. That’s what they’re being offered by the dying paradigm in Europe.

What are they being offered from the BRICS, from China’s Maritime Silk Road? To become the hub for a transcontinental development plan, and possibly the first European member of the BRICS. The hub, the connecting point between the BRICS and a new Europe, a Europe which rejects the dying Empire. Greece is ready to join the BRICS, and in fact, its only hope for survival is to join the BRICS, as is true for Europe as a whole.

Preceding the National People’s Congress taking place this month in China, a spokesperson for the Congress told a press briefing, when asked if the New Silk Road would be on the agenda, said, yes, yes, indeed, it would be a major part of the agenda (see above article). And it’s important to note, she said, that the Silk Road has been on our agenda for 20 years.

But, before, we didn’t have the money to do it. Now we do.

What is involved? Rail connections, ports, power development, water projects—it’s essentially bringing these nations together around the idea of mutual trade and development. And of course, it’s going to include Africa, as the original Zheng He operations did. In fact, China is now leading the development process across the African continent.

The Africa section of the EIR Special Report, “The New Silk Road Becomes the World Land-Bridge” contrasts the rail system that’s there now, as built by the European colonial powers, to what the Chinese plan today, and have already begun building. What’s there today is nothing but rail lines from the ports to the mines, You can’t even get from one country to another. The colonial powers were only interested in grabbing raw materials and getting them out, taking them back to Europe.

Now, China needs the raw materials too, as do Japan and Korea and others. But they are paying for them. Not by loading up the poor nations with debts, but by building infrastructure which creates modern nations. Premier Li pledged that China would build high-speed rail lines connecting all the capitals of Africa, as well as lines crossing the continent. These two opposite visions illuminate the difference between the imperial policy of European colonialism (and the current policies of the U.S. and Europe), and those of the BRICS nations.

What is the U.S. response to this? Actually it was stated even before China began its Silk Road projects—the Obama “pivot to Asia,” which is intended to create a ring around China, militarily, and economically through   the   Trans-Pacific   Partnership (TPP), a trade deal which excludes China. The U.S. has turned the Philippines into a massive U.S. military base. It is placing high-altitude missiles and radar systems along the Chinese border, threatening both China and Russia, while at the same time pushing war against Russia in Europe.

At the Asia Pacific Economic Cooperation (APEC) conference in Beijing last November, President Xi invited President Obama to join the efforts of China and other Eurasian nations, including Russia, in the development of the New Silk Road. A petition being circulated by Zepp-LaRouche’s Schiller Institute calls on the

U.S. and Europe to “Have the courage to reject geopolitics and collaborate with the BRICS, . . . readopting the principle of the Treaty of Westphalia by basing foreign policy on the principle of the benefit of the other, which ended the Thirty Years War in Europe, and on John Quincy Adams’ concept of a community of principle among sovereign nation states.”

The petition can be read and signed at the Schiller Institute website.

Asia-Pacific BRICS China-Europe Relations One Belt One Road Silk Road
printTweet
You might also like
Back to Top
CHINA US Focus 2018 China-United States Exchange Foundation. All rights reserved. Disclaimer