The Only Way Forward

The pathway to a more advantageous U.S. economic relationship with China will not be easily forged, but it is vital to the American economy. Indeed, the relationship is of paramount importance globally. In 2015, total goods trade between the U.S. and China was US$416 billion. On top of that, China is the world’s largest holder of U.S. government debt, including U.S. Treasury securities, and bilateral foreign direct investment between the two is growing. 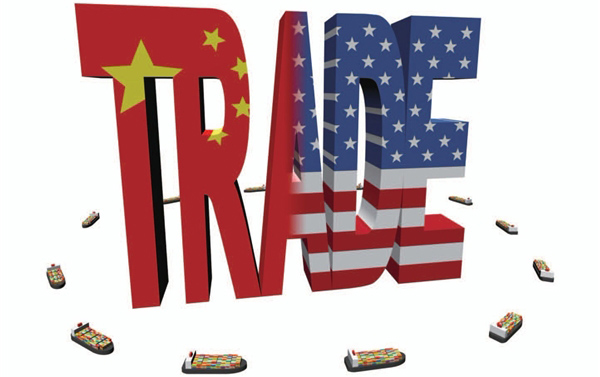 During the recent campaign, President elect Donald Trump repeatedly stated that the U.S.-China bilateral trade deficit – which for the 12 months ending June 2016 was $328 billion – shows that the China is taking advantage of the United States. Trump said that he will label China a currency manipulator and raise tariffs up on Chinese imports by up to 45 percent.

Before pushing forward on these promises, Trump and his advisers should consider the costs to the U.S. of implementing these policies and the likely reaction from China.

China and the U.S. trade deficit

The Chinese government has increasingly engaged in a range of trade and investment restrictions that disadvantage U.S. businesses in China and better enforcement of China’s existing international trade law commitments is warranted.  However, the U.S. trade deficit is a product of macroeconomic forces that are immune to China-specific trade actions.

Except for a brief period in the early 1990s, the U.S. has been running a trade deficit since the 1970s. The trade deficit is commonly seen as evidence that the U.S. is made worse off by trade, yet, over the past 30 years, a widening U.S. trade deficit has been correlated with rising GDP and lower unemployment.

America’s trade deficit, which accounts for most of the current account deficit, has as a direct corollary as a capital account surplus of the same magnitude. The U.S. is a net importer of capital due to insufficient domestic savings to finance all the U.S.’ investment needs. Net capital inflows into the U.S. reflect confidence in the U.S. economy, as foreigners demand U.S. assets such as bonds, equities and real estate. And it is capital inflows and macroeconomic variables such as interest rates that put upward pressure on the dollar and on U.S. asset prices, making imports cheaper and exports less competitive, which increases the trade deficit. 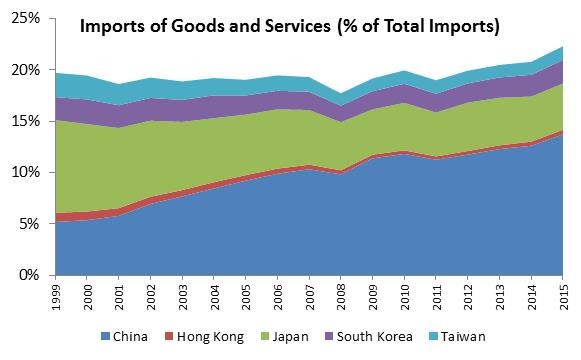 Raising tariffs on Chinese exports would be a tax on U.S. business and U.S. consumers. The graph also points to the growth in value chains in the Asia region, which means that U.S. tariffs on Chinese imports would in effect be tariffs on imports from Japan, Korea and Taiwan, since many items produced in those neighboring countries rely on component parts or assembly in China.

China would retaliate in kind to any unilateral tariff increase by the United States. So, while the U.S. would import fewer goods from China, China would also import fewer Boeing products, less computer equipment, less agricultural products, etc...  This would compound the negative impacts of higher tariffs, hurting in particular businesses in states like Alabama, Montana, and South Carolina which have had 500 percent growth in exports to China since 2006.

China could also be expected to challenge such U.S. action at the World Trade Organization (WTO).  Any WTO decisions against the U.S. would further legitimize Chinese trade barriers against U.S. exports.

An artificially low renminbi (RMB) makes Chinese imports into the U.S. cheaper and U.S. exports to China more expensive. As noted, Trump has stated that he will direct the Treasury department to label China a currency manipulator.  China may have kept its currency artificially low during the 2000s, however, the current focus by Trump on China as a currency manipulator is ill-timed. China’s trade surplus has declined from over 10 percent of GDP in 2007 to under 3 percent today (in comparison, Germany’s is 8.5 percent). Instead, China is shoring up its currency rather than artificially keeping it low.  At the 2016 US-China Strategic and Economic Dialogue, China committed to continue market-oriented exchange rate reform.

What’s more, as part of the Trans-Pacific Partnership (TPP) agreement, measures were agreed upon to improve the transparency of currency markets and to address currency manipulation.  The 2015 Trade Facilitation and Trade Enforcement Act further strengthened the focus on currency, directing the U.S. Treasury to identify currency manipulation by other countries when there is: 1) a material bilateral trade surplus with the U.S.; 2) a material current account surplus in excess of 3 percent of GDP; and 3) and evidence of persistent one-sided intervention in the currency market.  According to the U.S. Treasury’s October 2016 Report to Congress on other government’s foreign exchange policies, China now only fulfills criteria two (in April 2016 it fulfilled criteria one and two). For this reason, Treasury has so far declined to label China a currency manipulator.

Declaring China a currency manipulator without strong economic justification would have a range of negative effects. First, given China’s economic challenges, it is unlikely that such a move would lead (at least in the short-medium term) to an appreciation in the RMB. It would, however, lead to political demands in the U.S. for additional tariffs on Chinese imports.

Even in the event of an RMB appreciation, the US-China bilateral trade deficit would likely decrease somewhat, but the net effect would be a change in the composition of the US trade deficit with Asia, with production moving to other countries in the region.

China-US TradeTPPFree Trade ZoneTrump and China Policy
printTweet
You might also like
Back to Top
CHINA US Focus 2018 China-United States Exchange Foundation. All rights reserved. Disclaimer