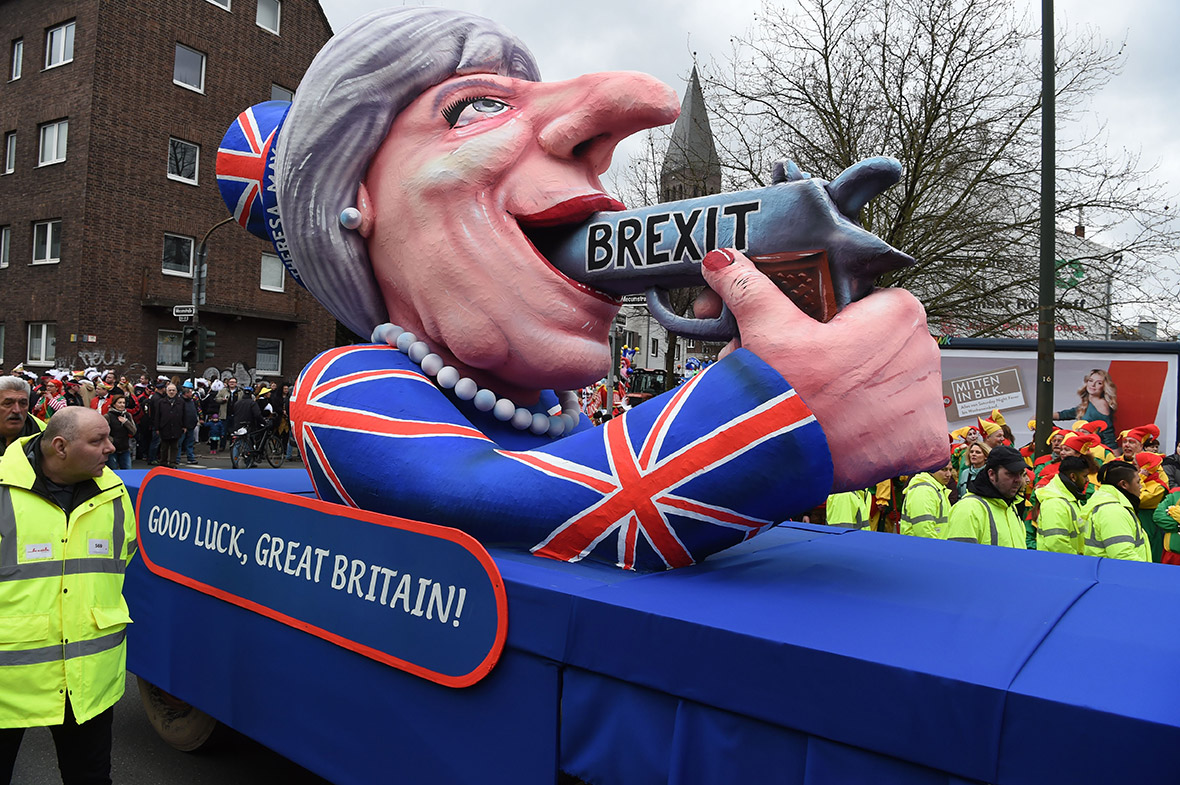 The controversial Theresa May float, which will be coming to Norwich. Pic: Unite for Europe.

The result of the June 8 election in the UK came as a shock, though less so compared to the EU referendum in 2016, and proved polls wrong again. Though the lead of the Conservative Party over Labour was reduced significantly towards the finish line, polls widely predicted before the election that Theresa May would get what she wanted for calling this early election, namely an enhanced majority in the House of Commons. Instead, the Conservatives were denied a majority and has to seek “supply and confidence” from the Democratic Unionist Party (DUP) in Northern Ireland to form a minority government. Theresa May’s position in the party was greatly damaged and she is holding onto power compromised and weakened.

Jeremy Corbyn’s Labour Party, though holding nearly 60 seats fewer than the Conservatives, has gained in strength and momentum. Its relative success compared to its performance in 2015 will freeze the “Corbynite” and “Blairite” infighting for now and unite the party against the Conservatives. The election has also seen a withering away of small parties, as Ukip crumbled significantly and the Liberal Democrats have yet to recover from the disastrous results of the 2015 election. In the North, the Scottish National Party fared much worse than before, which makes its bid for a second independence referendum beyond the horizon.

The election has been important in many ways. It is first a wake-up call for the governing Conservatives that they cannot take voters for granted. The self-serving calculation for calling the election to exploit the weakness of the opposition, and the kind of carelessness and arrogance of running a campaign that projects only fear and offers no hope and no change, ultimately backfired on them. Hopefully, the election will lead to a rethink among the governing elites about what the British people really want. It seems that the Conservatives thought the only thing people want is to be taken outside of the EU. The election proves them wrong.

It has revealed deep divisions in British society. The Conservatives and Labour attracted roughly the same share of popular votes, 42% and 40% of the total, but their platforms are the most opposite in nearly 30 years. Labour’s message of anti-austerity and social justice, namely higher taxes on the rich and more spending on the poor, has resonated well with a significant part of the electorate.

It removes any façade of the consensus that “Brexit is Brexit”. The split on Brexit was manifest completely during and after the election. The so-called mantra “Brexit is Brexit” of Theresa May is rendered meaningless: It is very clear there is no consensus whatsoever on anything about Brexit. In the election, discussions about “Soft Brexit”, “Open Brexit” and even reversal of Brexit were brought up. It is almost surreal that when the UK-EU negotiation were due to start in a week’s time, the UK hadn’t figured out its position on Brexit.

The UK is undoubtedly heading for a period of uncertainty. Even assuming Theresa May is able to keep her job for a period of time to avoid immediate party infighting, the stability of a Conservative minority government with the support of DUP cannot be guaranteed. The informal coalition has only a very slim majority in the House of Commons. Given the fact that the opposition parties don’t like many policies of the Conservatives and the government has a lot of legislation to pass through parliament, it will be frequently challenged and the threat of government collapse will always be there.

The elephant in the room is Brexit. The election will re-shape it in many ways. On top of everything, the UK’s position at the negotiating table with the EU27 will be weakened considerably. From the election, the EU sees through its negotiating partner, divided and clueless, and the so called “no deal is better than a bad deal” is mostly bluff. However, despite big uncertainties ahead, the election is not complete bad news for Brexit. Before the election, there had neither been inquiry into what people really want out of Brexit, nor effort to reach out to the 48% remain voters. The approach of Theresa May was basically to take UK out of EU at whatever cost.

The election will put an end to that. It will be interpreted as a rejection of the “Hard Brexit” plan, which is to take UK out of both Single Market and the Customs Union. Conditions are now set for the first time for wide-range, cross-party dialogues on the goals of Brexit and thus a real opportunity has opened to form a consensus. Only when a consensus is reached can the government claim it has a mandate and try to make the best possible outcome.

The years ahead for the UK will not be easy. It faces the daunting task of delivering Brexit when confidence is low and division is huge. A year away after the EU referendum opened Pandora’s box, a happy conclusion to this unpleasant episode is still out of sight. But on a more positive note, for a nation known for its flexibility and resilience, it may well be that the country will rise above yet another challenge and turn itself around, like it has done many times before.

BrexitEuro Zone
printTweet
You might also like
Back to Top
CHINA US Focus 2018 China-United States Exchange Foundation. All rights reserved. Disclaimer