Why China is Turning to the EU Over the U.S. for Trade and Investment

A day after the terror attacks of September 11, 2001, Le Monde declared: “We are all Americans.” But the honeymoon of shared suffering ended quickly when U.S. military revenge raged across Afghanistan, Iraq, and elsewhere. Instead, a deep and broad transatlantic rift emerged, thanks to bitter disagreements about President Bush’s foreign policy revolution.

Today, many feel an odd sense of déjà vu.

President Trump had barely left Europe to cope with the Russia debacle at home before German Chancellor Angela Merkel suggested that Trump’s America was no longer a reliably close ally. An outcry ensued, with analysts on both sides of the Atlantic warning about an epochal shift in relations. Afterwards, Chinese Premier Li Keqiang called for joint efforts to promote globalization during his visit to Germany.

It was that consensus that led China and the European Union (EU) to begin to pave a way to save a global pact against climate change from which Trump said he will withdraw. In a statement, by European Council President Donald Tusk, European Commission President Jean-Claude Juncker and Premier Li, the EU and China pledged they would commit to full implementation of the Paris Climate Agreement.

Concurrently, Washington grew apprehensive. The somber mood was reflected by the New York Times headline, “China Sees an Opening in Rift Between Trump and Germany.” As always, the shift was conceptualized as a reaction to a policy vacuum created by Trump. In reality, the ties between Brussels and Beijing have grown steadily since the 1990s, even when U.S.-Chinese ties have fallen under pressures.

Like the U.S., the EU does believe in the West’s unique values and interests. But unlike Washington, Brussels does not believe that Europe should serve as a “shining light” to the rest of the world. Brussels does not share Washington's strategic interest in global military superiority. Europe has occasionally supported America's messianic regime changes, but usually with costly political aftermaths.

Shifts in China-EU-U.S. Trade and Investment

In the past two decades, China has become a key trade partner to both the U.S. States and the EU (see Figure 1). 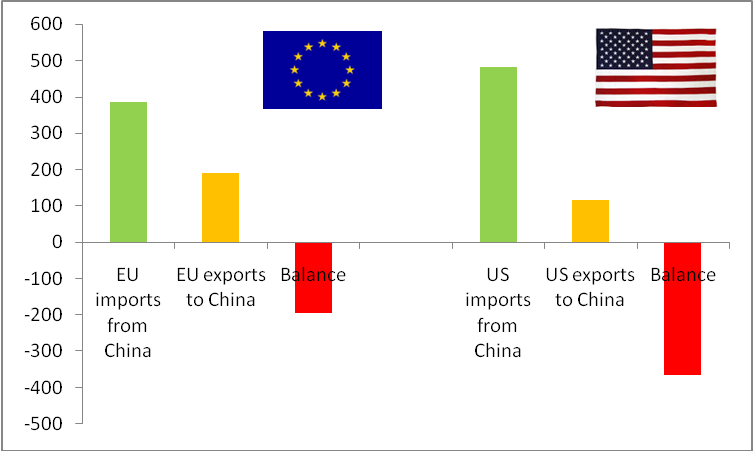 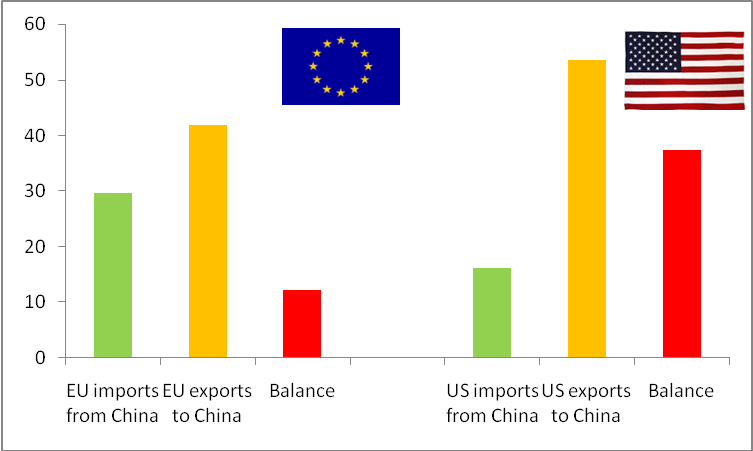 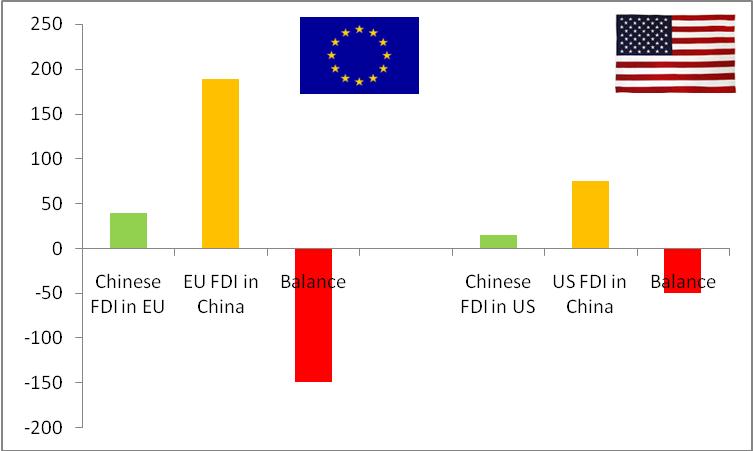 Sources: EU data: European Commission. U.S. data: (a) U.S. International Trade Commission (USITC) DataWeb. (b)(c) Bureau of Economic Analysis (BEA). Note: There are significant differences between Chinese, U.S. and EU data, due to the fact that same things are defined in a slightly different way. Also, U.S. investment figures tend to be more conservative than some other estimates, for instance those by the Rhodium Group.

In goods trade, both the U.S. and the EU have a significant deficit with China. In both cases, Chinese imports exceed hundreds of billions of dollars. Yet, the U.S. deficit is almost twice as large as that between the EU and China. Although China has become one of America’s fastest-growing export destinations, EU companies export to China almost twice as much as U.S. multinationals.

In services trade, both the U.S. and EU have a significant trade surplus with China. This is typical to economic cooperation between advanced economies, which are closer to the innovation frontier, and emerging economies, which seek to catch up the technology gap. Yet, in both cases, the surpluses were far bigger in the past. As Chinese companies become more competitive, the gap is shrinking.

While China would like the U.S. to open its technology sector more broadly to Chinese firms, this has been challenging, due to Washington’s views about Chinese technology espionage and national security, as evidenced by high-profile merger and acquisitions (M&A) conflicts in the U.S., from the Chinese oil giant CNOOC in the early 2000s to its ICT giant Huawei in the early 2010s.

In foreign direct investment (FDI) stocks, both the U.S. and the EU have significant deficits but those of the EU are three times larger than America’s, not least because EU companies have been far more eager to invest in China. Although EU firms have invested more in China than vice versa, this status quo has been shifting since the early 2010s as Chinese capital has begun to flow abroad. In the process, Chinese companies have been able to invest in Europe relatively far more than in the U.S.

These trends are even more prominent if we shift focus from the EU toward its individual member states.

In the postwar era, when the United States briefly dominated almost half of the world economy, it was the leading exporter. With China, the picture has dramatically shifted in the past 15 years, ever since its membership in the World Trade Organization (WTO) – as evidenced by a comparison of the major EU member states’ trade exposure to the U.S. and China.

The comparison suggests that, while the top-eight EU member economies (which account for more than 80 percent of the EU GDP) continue to export more to the U.S. than to China in relative terms, Chinese imports are thriving in Europe. UK may export more to U.S. than China, but imports are at the same level. The same goes for Germany, Europe’s largest growth engine, which is importing as much from China as it is exporting to China; and so is France. In Italy, this dialectic is even more prominent. And Europe’s smaller economies – Spain, Netherlands, Sweden, and Poland – reflect similar trends (Figure 2). 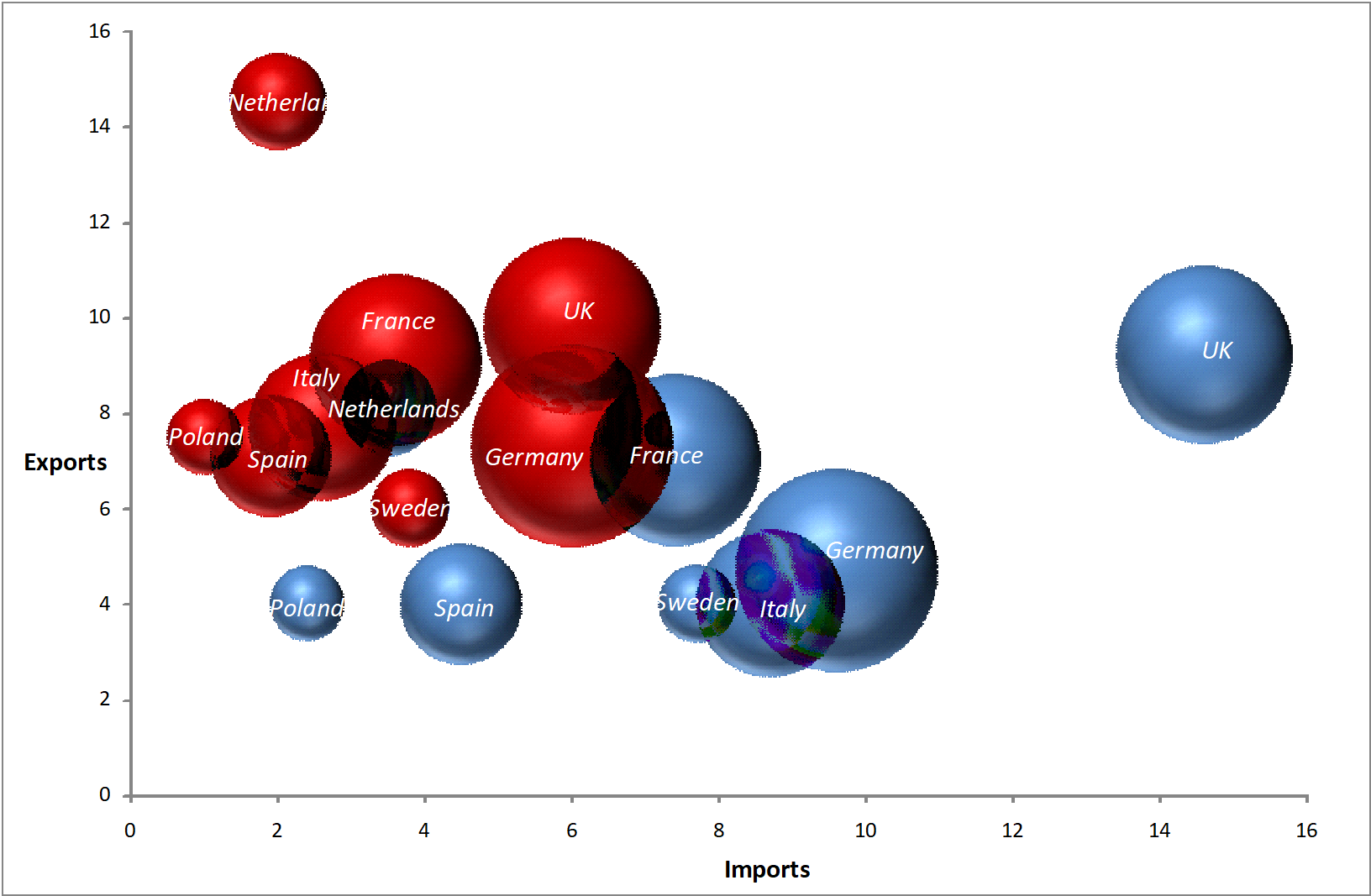 Source: Data on U.S. and Chinese exports and imports from CIA Country Book

In the coming years, Sino-EU trading ties are likely to increase via goods and services trade, as well as foreign investment. Moreover, as China is moving from net exports and investment toward consumption and innovation, the role of European technology companies and brands is likely to increase in China, while Sino-EU innovation cooperation could thrive as well.

In the Bush era, America and Europe nearly divorced because of disagreements about security. Today, the calls for annulment are fueled by a bitter split about economic ties and climate change. This was signaled particularly strongly by a recent report by Pew, which suggests that, in the Trump era, U.S. image has suffered dramatically among publics around the world. Yet, the view is misguided because it suggests that the trend is recent and reflects mainly opposition to President Trump.

In reality, there is a longstanding U.S. trend from postwar internationalism and free trade to post-Cold War nationalism and neo-protectionism. Trump’s election triumph was based on taking advantage of the trend, but he did not create it. While this trend did surface in the aftermath of Vietnam, following the 9/11 attacks and the 2008 Iraq troop surge, it has progressively strengthened since the 1990s, as evidenced by longitudinal polls of U.S. publics. It is this trend that both European and Chinese leaders regard as America’s global risk (Figure 3).

Survey Question: “The U.S. should mind its own business internationally and let other countries get along the best they can on their own.”

It is not just Trump that is pushing Chancellor Merkel toward China, but almost three decades of neoconservative dreams of American Empire, Democrats’ liberal interventionism, and the progressive dissolution of American welfare state since the Reagan revolution. None of these ideas – imperial fantasies, regime change policies, and laissez-faire conservatism – have substantial support in Europe.

While the transatlantic economies tend to share similar values, their interests are diverging, even as those between China and the EU are converging. In the latter case, Beijing, particularly due to the mainland’s interest in global economic integration and climate change mitigation, shares far more with the EU than Washington with Brussels. This shift is not something that should be attributed to Trump alone. It is a divide that, historically, originates from the Reagan revolution.

Tweets by ChinaUSFocus
InvestmentChina-US-Europe RelationsEuro ZoneUS-China Social and Cultural DialogueEconomic Relations
printTweet
You might also like
Back to Top
CHINA US Focus 2018 China-United States Exchange Foundation. All rights reserved. Disclaimer