Over the past decade, global economic prospects have been penalized by the fall of world trade, investment and migration, coupled with the unnecessary suffering of more than 100 million globally displaced.

Globalization has come to a halt, even reversed. In the rejuvenation or degeneration of future globalization, U.S.-Sino relations will play a critical role, in good and bad.

After the Cold War and the post-9/11 wars, more Americans have come to believe that the U.S. should go its own way in international matters. Meanwhile, bipartisan political consensus has drifted from multilateral cooperation to unilateralism, buttressed by a sharp rise in support for increased defense spending.

Following China’s 2001 membership in the WTO, American views on China were divided until the trade wars. But when the prospects of global recovery still loomed ahead, positive perceptions soared. As Gallup put it in early 2017:

Americans have been feeling more positively toward China in recent years, and now 50% say they have a favorable opinion of that country…

The balance has shifted, and now 50% view the world's most populous nation favorably and 48% unfavorably. Although Republicans still hold a more negative than positive view of China, the 38% currently viewing that nation favorably is up from 28% in 2016; and now, a majority of independents -- along with a majority of Democrats -- share that view.

At the time, the net American perception was the highest since 1989.

If mainstream media excels in "manufacturing consent," the recent consent on China and Asia has been fostered by bias and xenophobia, as evidenced by alarming data on anti-Asian hate crimes. For all practical purposes, these years of hate and Sinophobia have been highly effective. Today half of Americans see China as the “leading economic power in the next 20 years” and (thus?) as America’s “greatest enemy” (Figure 1).

But do these surveys reflect actual economic facts or mainly perceptions? In 2000, China’s economy was barely a tenth of the U.S. GDP. The original BRIC estimate was that China would surpass the U.S. in the late 2020s or so, and that could be the case.

Chinese living standards are a very different story. Per capita incomes were barely 2% relative to the U.S. in 1980. Today, that figure is almost 33%; a world-historical performance in just four decades. But even in 2050, relying on current projections, these incomes are expected to be barely 40%, which is still less than half of the U.S. level (Figure 2). 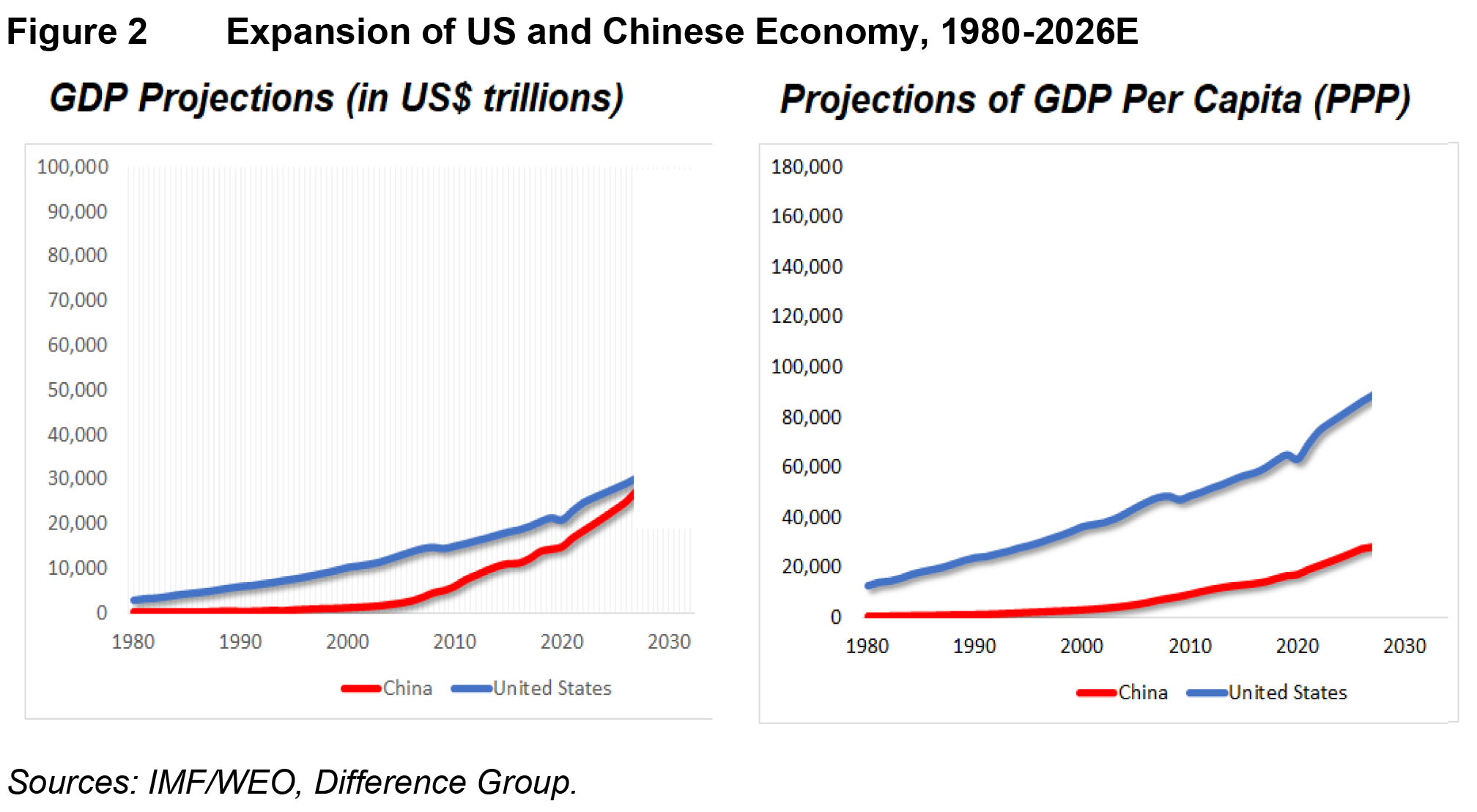 Since 2017, the White House has framed its policy toward China in terms of “great power competition,” with primary implications for defense. In the Biden administration, Kurt M. Campbell, the architect of the “pivot to Asia,” became the president’s Asia czar, supported by Secretary of State Antony Blinken, and National Security Adviser Jake Sullivan. Since neither of the two had practical China experience, Campbell has been the key actor.

Despite their extraordinary conflicts of interest, Campbell and Sullivan defined the new policy mantra as “competition without catastrophe.” Nevertheless, as we have seen in just the past two years, efforts to decouple U.S.-China ties have the potential to derail globalization and global economic prospects for years, or perhaps even decades, to come.

Maximum competition without economic catastrophe is elusive when geopolitics trumps over economics.

Global economic integration is often measured by world trade, investment and migration. The postwar wave of globalization benefited mainly the advanced economies. It was only after 1980 that some developing countries, spearheaded by China, broke into world markets for manufactured goods and services, while attracting foreign capital.

This era of globalization eclipsed with the global recession in 2008. As the G20 cooperation subsequently dimmed, so have global growth prospects, too. In turn, the brief gains of the U.S.-Sino trade truce have been derailed by the COVID-19 pandemic and the dire international economic landscape. As a percentage of world GDP, world trade has fallen back to the level where it was over 15 years ago.

Global migration has been slowing since 2008. Due to the pandemic, the stock of international migrants has increased only by 2 million; a fourth less than expected by mid-2020. But let’s put these figures in context. Between 1870 and 1914, some 10 percent of the entire world population migrated in search for a better life. While the absolute number of international migrants has more than tripled in the past half a century, their relative share stayed below 2% until 2010 and is today 3.6% of world population; a third of what it was a century ago.

Globalization has been derailed (Figure 3). 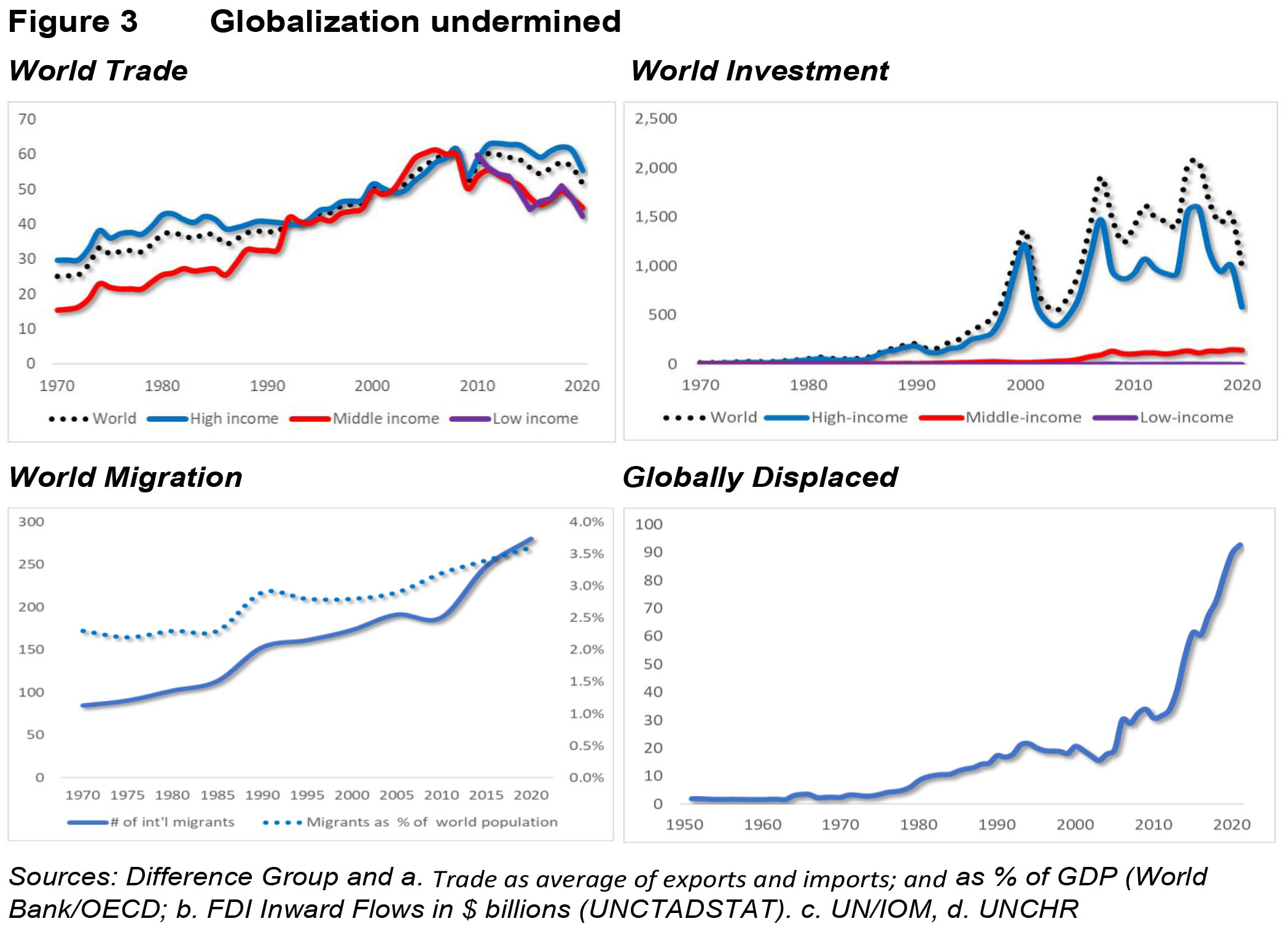 In March, Larry Fink (2022), CEO of BlackRock, the world’s biggest asset manager, declared that Russia’s war in Ukraine means the “end of globalization.” In reality, some developed economies are opting for protectionism, while developing economies are only starting their industrialization.

Second, pressures against globalization have steadily increased since the Cold War, as evidenced by Ross Perot’s anti-NAFTA campaign in 1992; the 1999 Seattle WTO protests; and the 2008 Great Recession and a decade of painful debt crises in the G7 economies. Today, global growth prospects are almost 40% lower than projected in 2017; and they continue to dwindle.

If the planned policies remain in place, sanctions will undermine U.S. growth, destabilize the Russian economy, penalize the fragile Euro area and slow Chinese growth. Meanwhile, the Global South will pay most of the bill.

Ultimately, the future of the U.S.-Sino bilateral ties depends on whether globalization will be driven by economic growth and development, or remain subject to geopolitical agendas. In the latter case, secular stagnation will deepen prematurely in the West and cause unnecessary growth deceleration in the Global South for years, even decades to come.

Today, the number of the globally displaced alone is over twice as high as it was after two world wars, the Holocaust, Hiroshima and Nagasaki in 1945. If that's the outcome in peacetime conditions, one shudders with horror at the effect of what wartime conditions would look like in the early 21st century.

In the past half a decade, the cost of missed opportunities amounts to trillions of dollars. Given continuing policy mistakes, worse looms ahead.

GeopoliticsGeoeconomicsGlobal EconomyGlobalization
printTweet
You might also like
Back to Top
CHINA US Focus 2022 China-United States Exchange Foundation. All rights reserved.