Benign Engagement Between Myanmar, China and the United States

From August 17 to 21, Myanmar State Counselor Aung San Suu Kyi visited China, which was also her maiden visit to a non-ASEAN country since she became State Counselor, and a testament of the importance attached to China-Myanmar relations. The visit carried extra significance as Aung San Suu Kyi also serves as Minister of President’s Office, Foreign Minister and President of the National Reconciliation and Peace Centre. Premier Li Keqiang hosted a welcoming ceremony in her honor at the Great Hall of the People on the afternoon of Aug 18. In the meeting that followed, both sides agreed to work together to cement political mutual trust, strengthen communication and cooperation, guided by the Five Principles of Peaceful Co-existence and mutual respect, in order to take China-Myanmar relations to a new height. 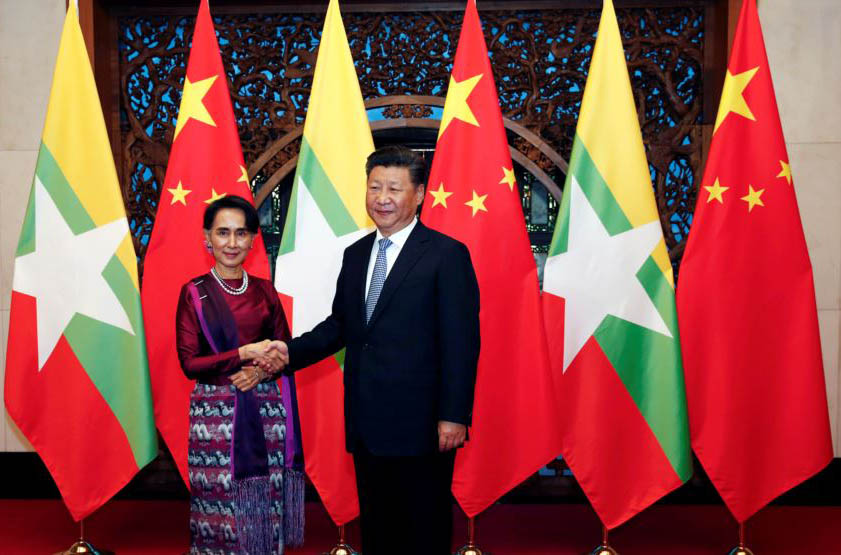 Myanmar is the second–largest country in Southeast Asia, and is known as the Golden Land because of her natural endowments and resources. Bordering China and India, Myanmar is an important junction linking Southeast and South Asia, hence occupying a critical geopolitical location that is caught at the center of political wrangling between foreign powers. Western media have discussed and speculated over Aung San Suu Kyi ‘s first overseas destination, whether it would be the United States or China, in order to get a sense of her foreign policy priority. To some degree, the discussion itself spoke to the attention Aung San Suu Kyi ‘s visit to China would attract.

Myanmar’s relationship with the United States is closely watched by Chinese media. Since Myanmar’s democratic transition, the country is gradually shaking off the isolation and sanctions posed by Western countries when it was under junta rule. Engagement with the West is gaining traction. Consequently, the United States, the EU and Japan see their influence in Myanmar surging, and one of the goals of the Western powers is to leverage their influence over Myanmar to contain the development of China, and squeeze the diplomatic space of China in the Mekong River region. It fits into US’ pivot to Asia strategy, which hosts overarching components. In Asia’s northeast, the deployment of the THAAD system as an apparent countermeasure to North Korea’s nuclear activity would also serve to monitor China’s defense system. In the east and southeast, the East China Sea and South China Sea issues have been simmering, in which the US play no small part, posing a security threat at China’s doorstep. While in the southwest, the United States have been working intensively to cultivate relations with Myanmar, Vietnam and other lower Mekong River countries, as a counter measure against China’s growing presence in the region. Furthermore, the United States launched the Lower Mekong River initiative as part of the effort to cement US clout in the Mekong River region against that of China.

China has been party to many cooperation initiatives, such as the China ASEAN strategic cooperation, Bangladesh-China-India-Myanmar Economic Corridor, and the Belt & Road initiative. The United States sees Myanmar as a lever to throw spanners into China’s works. It is no news that NGOs based in the US have been casting China-invested projects in a negative light, claiming these projects would result in adverse environmental and social impacts, in utter disregard of the benefits these projects generate for the local community. Their distorted narration fuels resistance towards Chinese projects and has even derailed several major projects.

In its attempt to counterbalance China, the United States resorts to backdoor means to disrupt China-Myanmar relations. This not only jeopardize China’s interests, but also puts Myanmar on the spot, and it is questionable how much the US could gain from it. Myanmar upholds a foreign policy of independence and neutrality, and therefore will not take sides between China and the United States. In her capacity as foreign minister, Aung San Suu Kyi said that the country seeks friendship and cooperation with all countries. The NLD-led government has a twin task — to deliver stability and development for Myanmar, and to foster good relations with major countries.

Myanmar needs to build good neighborly relations with China, and ride on the train of China’s fast development, and in the meanwhile, it cannot go without the support of the US, which is the sole superpower in the world. To spell it out, Myanmar needs to tap into its geopolitical positon and proximity to major powers in Asia, establish itself as a manufacturing, logistics and trade hub linking Southeast and South Asia, setting the stage for restoring its former glory as a major country straddling Central and South Asia.

Crunching a few numbers will make the case clearer. China is the largest source of FDI, with investment agreements worth $25.4 billion signed between China (Hong Kong included) and Myanmar in the first 7 months of the year, accounting for 40% of the total FDI to Myanmar, and 3.5 times the combined FDI from the US, EU and Japan. In terms of developing its political institutions, Myanmar models its democratic transition after the political systems in the US and Europe, and therefore need to emulate and learn from Western experiences in running the administrative government, parliament and political parties. What’s more, Myanmar has drawn from the expertise and counsel from Western countries, and is on the list of US Generalized System of Preferences (GSP), which provides duty-free treatment to goods of designated beneficiary countries.

Regional cooperation initiatives, such as the Lancang-Mekong Cooperation initiative and the Belt and Road initiative proposed by China, are invariably open-ended, including to Myanmar and the United States, and by no means would China want to engage in strategic confrontation with the United States over Myanmar in Southeast Asia. What China seeks is common development and shared benefits. Having said that, should the United States resort to unfriendly acts against China, a backlash will result in China and Myanmar alike, consequently derailing Washington’s own strategies in Southeast Asia and the Indian Ocean region. Alternatively, the United States, China and Myanmar can work together by building on their aligned and shared interests, and work towards win-win outcomes through trilateral cooperation. It is imperative that the three countries identify areas of cooperation in Myanmar, such as investment and public service projects, and foster a viable cooperation mechanism where interests are shared, risks are distributed. That will contribute to the economic prosperity of Myanmar and the well-being of its people, and meet the interests of the three countries and the region at large.

China-ASEAN Relations Periphery Diplomacy
printTweet
You might also like
Back to Top
CHINA US Focus 2018 China-United States Exchange Foundation. All rights reserved. Disclaimer