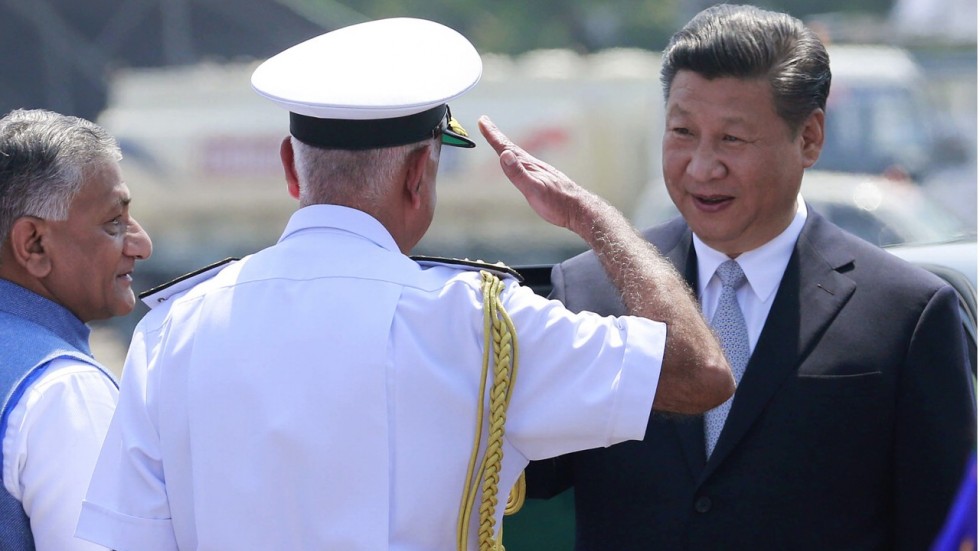 An Indian Navy officer salutes Chinese President Xi Jinping on his arrival in Goa, India, in October 2016 for the BRICS Summit (SCMP: AP)

The United States, Japan, India and Australia have renewed efforts toward a strategic constellation of democracies in the Indo-Pacific region, with their diplomatic officials meeting jointly on the sidelines of the recent East Asia Summit in Manila. The future of this currently low-key quadrilateral initiative (or “quad”) will be shaped largely by China’s actions, which are acting as a spur to establish what Japanese Prime Minister Shinzo Abe once called a “democratic security diamond.”

If China moderates its behavior by respecting international law, the quad is unlikely to gain traction. But if Beijing continues to flout established rules and norms on territorial, maritime and trade issues, the apparition of what it sees as an “Asian NATO” might eventually come true.

Today, the specter of a destabilizing power imbalance looms large in the world’s most dynamic region. In this light, close strategic collaboration among the major democracies can help institute power stability in the Indo-Pacific region and contain the challenges that threaten to disrupt stability and impede economic growth.

Let’s be clear: the alternative to a liberal, inclusive, rules-based order is an illiberal, hegemonic order with Chinese characteristics. Few would like to live in such an order.

Yet, this is precisely what the Indo-Pacific region might get if regional states do not work to counter the growing challenge to the rules-based order. China has prospered under the present order. But having accumulated economic and military power, it is now insidiously challenging that order through its actions.

Before the Manila summit, U.S. Secretary of State Rex Tillerson pitched for a concert of democracies. “The world’s center of gravity is shifting to the heart of the Indo-Pacific,” a development that demands “greater engagement and cooperation” among democratic powers, Tillerson said in his first Asia-Pacific policy speech since taking office.

To succeed, such an endeavor must reckon with certain realities, including by drawing lessons from the failed effort a decade ago to sustain a similar quadrilateral initiative. After the original quad held its inaugural meeting in May 2007, Beijing was quick to cry foul and mount intense diplomatic and economic pressure on the member-states. Ultimately, it succeeded in unraveling the quad.

From the beginning, Australia appeared ill at ease in the original quad, given that its economic boom was tied to China’s ravenous commodity imports. America’s own support to the quad was less than unreserved, in light of its economic co-dependency with China. As for India, its approach was low-key — tacitly supportive of the quad, but hesitant to do anything openly that could instigate China to step up direct or surrogate military pressure on it. That left Japan as the only enthusiastic member of the original quad. Indeed, the quad idea was conceived by Abe in his book, Utsukushii Kuni-e (Toward A Beautiful Country), which was published just months before he became prime minister for the first time in 2006.

Eventually, the Kevin Rudd government in Australia pulled the rug from under the quad in a vain attempt to appease Beijing. With his visiting Chinese counterpart by his side, then Australian Foreign Minister Stephen Smith said, “I indicated when I was in Japan that Australia would not be proposing to have a dialogue of that nature.” He went on to label the inaugural quad meeting as “a one-off” affair.

Had the quad members stood up to the Chinese pressure, China would likely have had less space to strategically alter the status quo in the South China Sea in its favor. China’s success in extending its control in the South China Sea by artificially creating seven islands and militarizing them has only emboldened its aggressive designs in the Himalayas and the East China Sea.

The lost decade since the first quad experiment means that democratic powers cannot afford to fail again. They need to come together through meaningful collaboration and coordination, because no single power on its own has been able to stop China’s territorial and maritime creep or rein in its increasingly muscular approach. The rebirth of the quad is an attempt to provide an initial framework to institute such collaboration among an expanding group of democracies.

To be sure, a democratic coalition is unlikely to take the shape of a formal alliance. A loose coalition of democracies can draw strength from the concept of democratic peace, which holds special relevance for the region. Shared values and interests are likely to drive democratic powers to promote maritime security, stability, connectivity, freedom of navigation, respect for international law, and the peaceful settlement of disputes in the region.

Democratic powers must proceed slowly, but surely, without unduly publicizing their meetings or intentions, in view of their failed experiment a decade ago and the current geopolitical challenges that are largely centered on China’s recidivist actions.

Japan and India, facing direct Chinese military pressure, have a much greater interest in the formation of a concert of democracies than the geographically distant U.S. and Australia.

An ongoing political crisis in Australia could trigger an election early next year, potentially bringing to power the opposition Labor Party, which seemingly favors a China-friendly foreign policy. Prime Minister Malcolm Turnbull’s job approval rating has slumped to a new low. Australia, having caused the collapse of the first quad experiment, remains the weak link in the reconstituted quad.

Meanwhile, the praise Trump lavished on China and its neo-Leninist dictator, Xi Jinping, during his Beijing visit raised the question of whether he fully shares Tillerson’s Indo-Pacific vision. To be sure, the success of the reconstituted quad depends on the U.S. being fully on board.

Major Asia-Pacific powers, of course, will continue to seek opportunities to balance against China, with or without the U.S. being on board. Two recent examples from the region — the revival of the quad and the movement toward concluding a final Trans-Pacific Partnership (TPP) agreement among the 11 remaining members — indicate a clear determination to block the emergence of a China-led future.

The plain fact is that the Indo-Pacific democracies are natural allies. And given that contrasting political values have become the main geopolitical dividing line in the Asia-Pacific region, establishing a community of values can help underpin regional stability and power equilibrium. Such a community can also ensure that China’s defiant unilateralism is no longer cost-free.

But whether a constellation of democracies actually emerges or remains just an attractive concept hinges on China’s willingness to play by the rules. In that sense, the ball is in Beijing’s court.

Indo-PacificChina
printTweet
You might also like
Back to Top
CHINA US Focus 2018 China-United States Exchange Foundation. All rights reserved. Disclaimer