With a string of high-level interactions to come, the South China Sea disputes will attract more attention and become a point of strategic contest again in September. 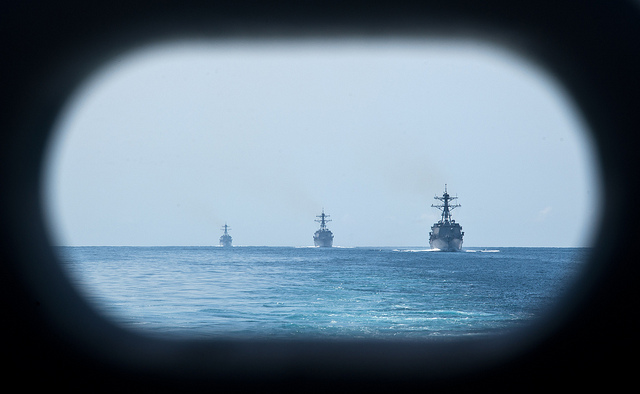 During President Xi Jinping’s visit to the United States later this month, President Obama is likely to raise this issue with him. In November, President Xi is expected to go to the Philippines for the APEC Economic Leaders’ Meeting, whose host this year, President Benigno Aquino III, has made it a more prominent issue with China. In the same month, Premier Li Keqiang is scheduled to attend the East Asia Summit (EAS) in Malaysia, where he will face off with the leaders of other claimants, ASEAN countries and non-regional countries which have expressed an interest in the issue (including the US, Japan, India, Russia and Australia).

The upcoming high-level discussions will likely center around the “dual-track approach” advocated by Premier Li Keqiang at last year’s EAS in Naypyidaw, Myanmar. Since then, it has emerged as a centerpiece of China’s policy toward the South China Sea disputes. The approach suggests parallel work in two tracks. In one track, the directly concerned states will seek to settle the disputes through bilateral negotiations; in the other, China and ASEAN will work to maintain peace and stability in the South China Sea.

This line of thinking has been in play for over a decade. By signing the Declaration on the Conduct of Parties in the South China Sea (DOC) in 2002, China and ASEAN countries took a step forward in maintaining regional peace and stability. But in the meantime, the South China Sea disputes have bubbled up from time to time. Hence the greater clarity and more emphasis by Beijing on the “dual-track approach”, especially since the 18th National Congress of the Communist Party of China in late 2012.

In 2013, it emerged as China’s preferred approach toward the South China Sea issue. This is best understood in the context of China’s evolving policy toward the neighborhood.

Wang Yi, soon after becoming foreign minister in early 2013, made Bangkok his first overseas destination on May 1. While in Thailand, he spelled out the new Chinese government’s “three commitments” to ASEAN:

– to strengthen good-neighborly relations with ASEAN as a priority in China’s neighborhood policy;

– to further consolidate and deepen China’s strategic partnership with ASEAN; and

– to properly handle disputes and differences with ASEAN countries through friendly consultation and win-win cooperation.

Then on June 30, speaking at the ASEAN plus China foreign ministers’ meeting, Wang zoned in on the South China Sea disputes and made the following key points:

– China calls for resolving the disputes through dialogue and direct negotiation;

– Those few claimants which have acted unscrupulously will not get their way; and

– China would still like to work with ASEAN countries to remove various interferences and uphold peace and stability in the South China Sea.

In September, Premier Li attended the annual China-ASEAN Expo in Nanning, Guangxi, where he called for efforts to build on the “gold decade” of China-ASEAN relations and embrace a “diamond decade”.

The following month, President Xi formally called for building a “21st Century Maritime Silk Road” and “a community of shared destiny between China and ASEAN” when speaking to the Indonesian parliament.

In this overarching framework for China-ASEAN relations, while the term “dual-track approach” has not yet surfaced, the key elements can already be distilled.

On August 8, Foreign Minister Wang made direct reference to it at the ASEAN plus China foreign ministers’ meeting.

– respect for direct dialogue and negotiation between the claimants; and

– respect for China-ASEAN efforts to uphold peace and stability in the South China Sea.

In late 2014, Premier Li mentioned the “dual-track approach” at the ASEAN plus China summit, sealing it as Beijing’s official policy for handling the South China Sea issue.

Wang elaborated on the idea, explaining that direct negotiation between claimants is the most viable and effective way to resolve the disputes, adding that it is in line with international law and customary practice and one of the key provisions of the DOC. On the other hand, since peace and stability in the South China Sea affects the vital interests of China and ASEAN countries, the two sides have a shared responsibility to uphold it.

In 2015, Beijing amended and improved the “dual track approach”.

On August 5, Wang, again at the ASEAN plus China foreign ministers’ meeting, reaffirmed China’s support for the “dual-track approach”, saying it is the first step towards resolving the South China Sea issue. In the days before and after, Wang outlined China’s “five commitments” and “three proposals”, which provided greater clarification on the “dual track approach”.

On August 3, Wang gave a press conference during his visit to Singapore, where he stated China’s “five commitments”:

– to maintaining peace and stability in the South China Sea;

– to resolving the disputes peacefully through negotiation and consultation;

– to managing differences through rules and mechanisms;

– to upholding freedom of navigation and overflight in the South China Sea; and

– to achieving win-win results through cooperation.

On August 5, Wang put forward “three proposals” for maintaining peace and stability in the South China Sea at the ASEAN plus China foreign ministers’ meeting:

– Countries outside the region commit to support these efforts by regional countries and to refrain from taking actions that may heighten tension or complicate the regional situation; and

– All countries commit to exercise and uphold the freedom of navigation and overflight in the South China Sea that they enjoy under international law.

It must be noted that the language like “preventive measures on managing maritime risks”, “countries outside the region” and “freedom of navigation and overflight in the South China Sea” were all added in light of the evolving situation to make the “dual-track approach” more relevant.

A discussion of the “dual-track approach” must not miss the bigger picture or fail to see it as the product of a strategic contest. The South China Sea has become a complicated chessboard in recent years. The outside advisers, who had been monitoring the situation, have turned into players. President Obama and several other G7 leaders have openly criticized China’s island build-out for changing the status quo and heightening tensions.

The dynamics in the South China Sea are shifting. Three layers are clearly discernible:

– the sovereignty disputes between China and relevant countries;

– the overall relations between China and ASEAN; and

– the strategic contest between China and other major powers.

While the first two layers are basically stable, the third layer is in constant flux. The South China Sea is a prominent issue in China-US and China-Japan relations. The China-US interaction, in particular, may come to be the dominant factor in the South China Sea disputes.

By focusing on the first two layers, the “dual track approach” places primary responsibility for resolving the South China Sea issue in the hands of China and ASEAN. Put another way, it denies the other major countries the opportunity to exploit and complicate the situation.

However, the reality on the ground is that while the COC consultation has made some progress, significant difficulties must be overcome before bilateral negotiations can materialize between China and other claimants. Moreover, there are growing risks of a China-US standoff in those troubled waters.

The United States wants to insert itself into the disputes over the objection of China. This is a lose-lose situation for both sides, not to mention the fault line it would create within ASEAN. Some American analysts suspect there is more to this than meets the eye. They see China’s advocacy of the “dual-track approach” as trying to exclude the United States. Worse, they regard China’s push for the “Silk Road Economic Belt”, the “21st Century Maritime Silk Road” and the Asian Infrastructure Investment Bank as calculated moves to undermine US interests in the Asia-Pacific region.

At this point, it must be fairly clear that the “dual-track approach” will not help mitigate China-US tensions in the South China Sea. Beijing must devise other strategies to address the question of US involvement.

The truth is, although the United States is excluded from the “dual-track approach”, there is no lack of communication between the two sides on the South China Sea issue, which came up at the Strategic and Economic Dialogue in June and will most likely be on the agenda of the Xi-Obama meeting in September. These are welcome opportunities for the two sides to make clear their red lines, reach some accommodation and reduce the chance of showdown. Ultimately, it will contribute to the efforts to build a new model of major-country relationship between China and the United States.

Great wisdom is required in handling an issue as complicated and consequential as the South China Sea. For starters, the “dual-track approach” can be married with the new model of China-US relations. Hopefully on this basis, confrontation can be averted, vital interests can be protected and comfort levels can be accommodated. This would be good for everyone.

South China Sea Xi’s US Visit
printTweet
You might also like
Back to Top
CHINA US Focus 2018 China-United States Exchange Foundation. All rights reserved. Disclaimer