How India, China and the U.S. Can Best Help Nepal: Finding Hope amidst Slow-Paced Earthquake Recover

This past month, Nepal marked two important occasions – one a tragedy, the other a growing friendship with China that may well bring new challenges of its own as this poor, land-locked nation finds its way forward amidst the geopolitics of the region.

While U.S.-China rivalries have come to the forefront in discussions of Southeast Asia, here the talk is of China-India rivalries, and of expected warming relations between the U.S. and India under U.S. President Donald J. Trump. 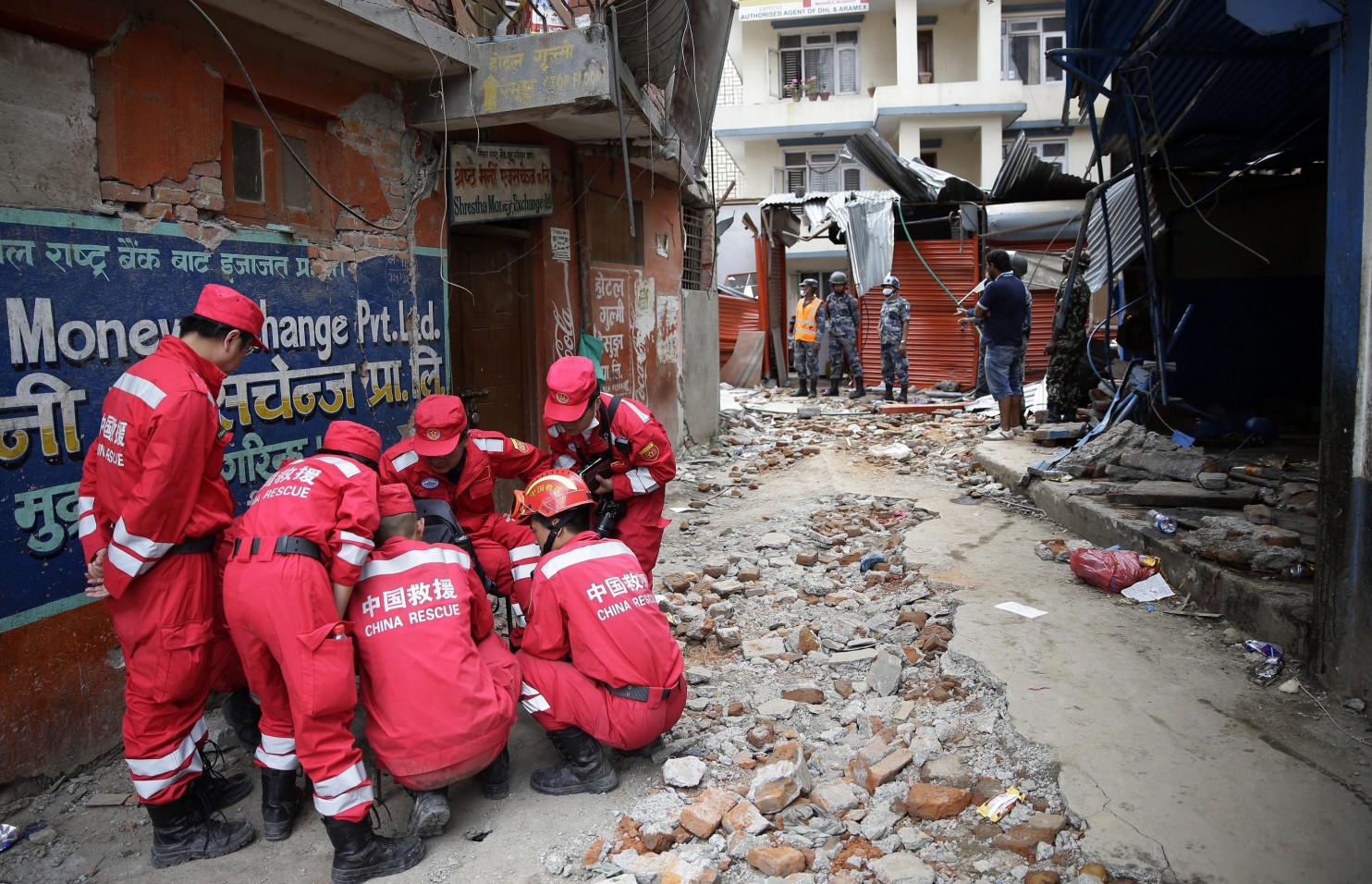 The first occasion of note was the commemoration of the deadly 7.8 magnitude earthquake that struck on April 25, 2015. That and a major aftershock that followed on May 12 took nearly 9,000 lives and damaged hundreds of thousands of homes here in Nepal two years ago. The United States, China, India and other nations were quick to respond with pledges of assistance – relief, reconstruction and development diplomacy, as it were.

The second occasion was the first-ever joint military exercises between Nepal and China – a move that could well make India uneasy and raise some eyebrows in the United States. The 10-day military drill dubbed "Sagarmatha Friendship 2017" extended to April 25th, and was organized in part to help neighbors China and Nepal's disaster management preparedness. Sagarmatha is the Nepali name for Mt. Everest.

The Nepal army has in the past conducted joint military drills with Indian and U.S. armies, the Times of India reported. Media reports also noted that the joint military exercise had been proposed during Chinese Defense Minister General Chang Wanquan's official visit to Nepal on March 24 – military diplomacy, as it were.

Nepal certainly has a continued need for assistance – whether from China, the United States, India, or others in the international community.

While culturally and heritage rich, Nepal even before the earthquake, was one of the world’s poorest nations. The nation of 29 million is second only to Afghanistan when it comes to a ranking of Asia’s poorest countries. More than 40 percent of the population live on less than $2 a day, and 70 percent are employed in the agricultural sector, according to the World Bank.

Now two years after the 2015 earthquake, the results of reconstruction efforts have been decidedly mixed, with tens of thousands of homes, buildings and heritage sites still needing to be rebuilt.  This is despite pledges of more than $4 billion in aid to help this poor, landlocked nation.

Still, amidst any pessimism over persistent corruption and cynicism in a still-recovering Nepal, there is reason for hope. My latest visit to this nation and conversations with a range of on-the-ground stakeholders underscore that even in the poorest of countries, hope can be found in the transformative power of technology. That is an important message also for potential Chinese, Indian and U.S. partners to Nepal. All nations can best help Nepal by putting geopolitical goals aside and encouraging Nepal's continued encouragement of a still nascent private sector and the continued adoption of appropriate technology.

While the word “technology” may well bring images of Silicon Valley and an entrepreneurial elite to mind, it is not just in the developed nations that technology can spark significant, positive change. Three lessons from Nepal bear this out.

This is particularly true after natural disasters, says Basanta Shresthra, director of strategic cooperation at the International Centre for Integrated Mountain Development (ICIMOD), a regional intergovernmental organization based in Kathmandu that is focused in part on the sustainable development of the Hindu Kush Himalaya region. Encompassing Nepal, this mountainous region extends more than 2100 miles over all or part of eight countries including China and India.

In the immediate aftermath of the devastating earthquake in 2015, technologies such as remote sensing with the latest satellite imageries, crowdsourcing, unmanned air vehicles and mobile applications were used for quick damage assessments to help with disaster response and recovery, notes Shresthra.

A conversation with America’s top diplomat in Nepal, U.S. Ambassador Alaina Teplitz, only reinforced my view that technology is more friend than foe – enabling new solutions to ages-old problems.

Information Communications Technology, or ICT, driven in part via the humble mobile phone, as an example, can help transform agriculture – a core of the Nepali economy. Better access to weather data, along with information on improved crop selection and market prices can prove transformative.

“We live in a truly interconnected world, with an ongoing digital transformation providing unimaginable opportunities for youth to help the development of Nepal,” Shrestra says. “Youth forces are unleashing the power of technology to address issues such as governance and transparency.”

And third, and perhaps most critically, technology is creating jobs. This is true even as fears rise in more developed nations over the negative impact of technology on employment.

That’s a clear message from my meetings with Tim Gocher, the CEO of the Dolma Impact Fund, and others focused on growing Nepal’s private sector. The Dolma Impact Fund – on whose advisory board I sit – is the first international private equity fund for Nepal and has been investing for almost three years in the nation.

"In Nepal, we are seeing how technology can also transform businesses and lives," Gocher tells me. "We see examples in healthcare with remote medicine, in education where teaching materials can now be distributed online to remote schools, and in banking where mobile and online banking are changing the landscape for rural financial services."

One example comes from the fund’s investment in CloudFactory Group, a company whose mission is to connect one million people in the developing world to digital-age work, while raising them up as leaders to address poverty in their own communities.

In essence, with technology as an enabler, the company is using a cloud-based platform to distribute simple tasks to its cloud workers, mainly in Nepal, from tech companies around the world. Such tasks range from transcribing expense receipts to annotating images for firms developing AI algorithms for self-driving cars.

"Our investment in CloudFactory Group takes technology's social and economic benefit to a new level,” says Gocher. “ They have changed what would be minimum wage work in a developed nation into much-needed work for Nepalis paying well over the minimum wage, and already have over 1,000 cloud workers. Our investment aims to enable them to create meaningful work for thousands more.”

I hear from others of several additional examples of the private sector harnessing the power of technology to create jobs in this nation perhaps more known for Everest than for innovative businesses.

At Incessant Rain Animation Studios in Kathmandu, teams are specializing in 3D character animation and producing visual effects for games, feature films and television. In biotech, Intrepid Medtech, with bases in Canada and Nepal, works in close conjunction with the Center for Molecular Dynamics Nepal on clinical diagnostics tools and technologies. And Massachusetts-based Deerwalk, a healthcare analytics company, has established a large development center in Nepal.

As often is the case, private citizens and the private sector are the ones who are – by necessity – innovating and filling the gap, when promised official development assistance is slow in coming. An environment that enables businesses to develop – not more aid money, whether from China, India or the United States – will be the key to a stronger economy and sustained job creation.

Nepal's private sector now to match the resilience of its people, the government must follow up on its own pledges to loosen its grip on the economy, including on foreign direct investment flows.

Technology has a critical role to play in helping Nepal to overcome past tragedy and to leapfrog from its current state of development. All nations with an interest in Nepal's ongoing recovery should put geopolitics aside and take that and other lessons to heart.

China-India RelationsEconomic CooperationGeoeconomics
printTweet
You might also like
Back to Top
CHINA US Focus 2018 China-United States Exchange Foundation. All rights reserved. Disclaimer