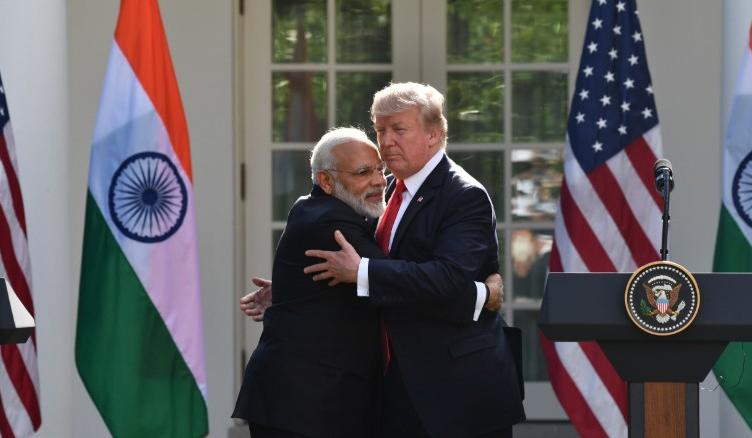 US President Trump and Indian PM Narendra Modi embraced each other in a bear hug when they met for the first time at the White House.Source: CNN

Heading into the recent meeting between Indian Prime Minister Narendra Modi and US President Donald Trump, expectations were modest. Even the Indian government played down Modi’s trip to the White House as a “no-frills” visit. Yet the leaders of the world’s two most populous democracies ended up making important headway, demonstrating the power of diplomacy to transform challenges into opportunities.

The US-India relationship, despite having become closer, has been burdened by mutual misgivings as of late. For the Trump administration, concerns have focused on issues such as the growing bilateral trade deficit, the displacement of US workers by Indian information-technology professionals, and India’s alleged use of the Paris climate agreement to extract billions of dollars in assistance.

India, for its part, has been increasingly worried about the Trump administration’s isolationist worldview and, in particular, its apparent retreat from Asia, where the US has been a key guarantor of security for the last 70 years. These perceptions dampened hopes that India and the US would continue to regard each other as reliable strategic partners.

But, in Washington, Modi and Trump displayed a comfortable chemistry, with no real discord to be seen – a departure from some of Trump’s other early diplomatic forays. More important than their apparent bonhomie, however, was their joint statement, which recognized what makes the bilateral relationship so valuable.

India matters to America for a host of reasons. It is the world’s fastest-growing major economy; it boasts the world’s largest middle class; and, soon, it will have the world’s largest population. Moreover, India abuts crucial global shipping lanes in the Indian Ocean. And it serves as an important democratic bulwark in Asia.

Such factors have given rise to rare bipartisan support for deepening US ties with India since the early 1990s. Yet they have not always proved sufficient to capture the sustained attention of US decision-makers. Judging by Modi’s recent visit, however, this may not be the case under Trump’s administration, which appears keen to build on bilateral security cooperation as a key tenet of its Asia policy.

The Trump administration seems to recognize that, at a time when rapid power shifts in Asia could affect regional stability, an increasingly confident India can help the US in underwriting security. It can work alongside the US to engage constructively with an ascendant China, not just to support economic growth and protect the environment, but also to ensure that China’s decisions help to sustain, rather than undermine, peace and prosperity in Asia.

This recognition is reflected in a significant new defense deal, announced at the recent meeting, as well as plans to increase military sales and exercises, deepen cooperation in the Indian Ocean, and build on last year’s cyber-security agreement. Public statements indicated that the two sides plan to continue with previous sensible policies in these areas. While they did not mention explicitly the hotly contested South China Sea, they should do so in the future.

Modi and Trump also demonstrated additional clarity and solidarity on confronting terrorism, by asking Pakistan to do more to disrupt extremist sanctuaries in its territory. A less permissive US approach toward Pakistan is not only likely to contribute to South Asia’s security; it can also help to reverse deteriorating security conditions in Afghanistan, where America remains mired in its longest-ever war.

Not surprisingly, however, Modi and Trump still seem unable to see eye to eye on trade and commercial ties. Although the bilateral relationship has historically tended to emphasize security and defense more than economics, the two leaders’ perspectives, exemplified in their new initiatives, threaten to leave things even more unbalanced.

Modi and Trump are nationalist leaders, focused on manufacturing-led domestic employment growth. But, in modern global supply chains, there is plenty of opportunity to go around. Finding mutually beneficial common ground requires reimagining the economic dimension of the bilateral relationship.

As it stands, both countries suffer from a gap between workers’ skills and available jobs. This should provide a basis for a robust dialogue on worker training and competitiveness, including a discussion of a contentious issue for the Trump administration: how India’s tech sector uses H‑1B visas, which are designed to give highly skilled workers access to the US.

If the US and India can overcome their differences on this front, they will find significant opportunities to learn from each other in important areas, such as how to use e-commerce and digital platforms to help small and medium-size enterprises increase exports. Infrastructure shortcomings offer another chance for deeper cooperation: the US and India, along with countries like Japan and Singapore, can share technology and pool resources in innovative ways, in order to develop tomorrow’s economy-boosting transportation links and urban centers.

Identifying synergies between Trump’s “America first” and Modi’s “Make in India” approaches will require creativity, patience, flexibility, and most important, a strategic focus. Both leaders will need to concentrate on the big picture: how to achieve mutually beneficial outcomes, in terms of productivity, competitiveness, and innovation.

Success will require engagement at all levels of the US government, from cabinet officials to diplomats. As a first step, the State Department must move faster to fill critical vacancies for positions dealing with South Asia.

Despite ongoing challenges, the US-India relationship under Trump and Modi has gotten off to a stronger-than-expected start. Each side has demonstrated a willingness to invest in the other’s future, not just lurch from deal to deal. Now the hard work begins: developing their joint strategic vision and implementing it consistently.