Rex Tillerson has just finished his East Asia tour as the US Secretary of State. The main purpose of his last stop and probably the most important one was to meet with Chinese leaders to prepare for the upcoming summit meeting between Chinese President Xi Jinping and the US President Donald Trump, said to be at Trump’s Mar-a-Lago estate of Florida early next month. 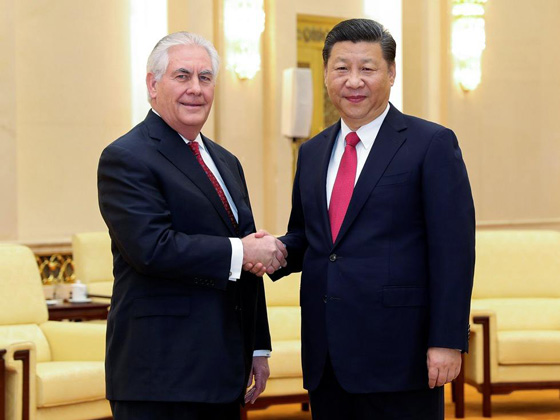 Therefore, the two sides have to ready the protocol and substance so as to make the summit successful. In terms of substance, there are ample areas to address for cooperation, including revitalizing the global economy and calibrating the Chinese dream and American dream, as well as their differences in dealing with the Taiwan issue, bilateral trade, the Korean Peninsula and certainly the South China Sea.

Despite vast common economic interests between China and the US, the two countries remain divided as to how to manage their trade imbalance. Lately China has been enjoying a significant trade surplus at over $300 billion per year. Successive US governments have been troubled by the rising imbalance and the associated job outflow to China.

The problem threatens to create a backlash against globalization. However, the solution is not to cut China’s export to the US, but to increase China’s import from the US. Even though the US is vigilant in guarding access to its most sensitive high technology, the US still has much to offer, including its safe food and rich agricultural products.

It is notable that from the second half of last year, China has taken strong measures to prevent its currency from further depreciating. While China has to do so to boost its own market confidence and to sustain the newly acquired status of RMB as an international reserve currency in the IMF, it has faced ever-stronger pressure of export decline. Therefore, China’s effort to stabilize its currency deserves commending.

Beijing and Washington have to take a long-term strategic view, as President Xi told Secretary Tillerson when they met in Beijing. It is important to enhance bilateral relations with strong social support, as this is the only sustainable approach toward “a new type of great power relationship” which Secretary Tillerson echoed in Beijing.

In terms of the Taiwan issue, reportedly Secretary Tillerson’s rich experience in conducting business has made him well acquainted with the importance of this unshakable position. Besides firmly honoring the “one-China” policy, he is also right in recognizing, as he admitted during his East Asia debut, that the US policy on the DPRK in the past two decades, especially on Pyongyang’s nuclear program, has failed. Nevertheless, he has to be careful about stating that all US options are now on the table; after all, the US has no preemptive option in dealing with a nuclear-armed DPRK.

America has virtually accepted nuclear-armed Israel, India and Pakistan, all for realistic reasons, so it is impractical to state that the US could consider all sorts of options toward the DPRK. Further, America has normalized relations with Cuba, after boycotting Havana for over half a century. Since the US’ preemption against Iraq has been a fiasco, any repetition of such against Pyongyang probably would hurt Washington more than Pyongyang. Secretary Tillerson shall be cautious in understanding American realism, especially given President Trump’s style to retract.

Having said this, it doesn’t indicate that one has to politically accept the DPRK’s nuclear reality. Rather, it is crucial to search for an effective means to cope with it. At this late stage, to stress denuclearizing the DPRK as the precondition for talks only destroys any chance to talk and to push the latter farther along its nuclear path. Regretfully, one has to face the North’s nuclear reality by asking it to cap, freeze and eventually cut its nuclear wherewithal, which takes a long time. Meantime, the US can seek a normal relationship, as it has enjoyed with Tel Aviv, New Delhi and Islamabad.

China is interested in working with America to assure Pyongyang’s legitimate security while persuading the DPRK to come down from the nuclear ladder. The upcoming summit meeting holds promise for a workable new type of great-power partnership.

Xi-Trump Summit
printTweet
You might also like
Back to Top
CHINA US Focus 2018 China-United States Exchange Foundation. All rights reserved. Disclaimer