The Coming Venezuela Reckoning for China and the U.S. 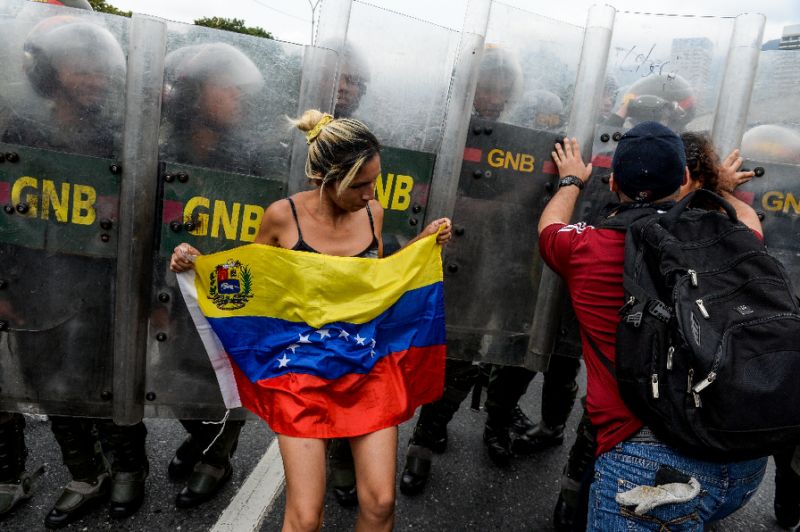 Protesters clash with riot police during a demonstration in Caracas on May 11, 2016 (AFP Photo/Federico Parra)

Washington is hardening its approach to the crisis enveloping Venezuela.  With strong Congressional support on a bipartisan basis, the Trump Administration has declared the Venezuelan Vice President to be a narcotics trafficking kingpin, sanctioned members of the Supreme Court, and met in solidarity with leading opposition figures.  Further steps may well be under consideration, particularly if the regime of Nicolas Maduro continues to deny basic civil liberties to its people.  Speaking in Miami at a June 15, 2017 conference on Central America, U.S. Vice President Pence called on the hemispheric community to move quickly to condemn the Venezuelan government for its “abuse of power,” arguing that democracy has been undermined by the government.

Venezuela’s worsening crisis intensified beginning at the end of March, when the Supreme Court at the government’s behest attempted to nullify the democratically-elected legislature as an independent body.  After a huge domestic and international outcry, the government partially reversed the decision, but the true authoritarian nature of the regime was fully revealed and the damage was done.  Massive, sustained street protests erupted and have continued since then, to which the government has reacted violently.  Almost 70 people have now been killed, with no end in sight.

Rather than heeding the call of the Venezuelan people for more democracy not less, the government of Nicolas Maduro has doubled down, hastening its trajectory toward full dictatorship.  The government has called for a constituent assembly at the end of July to rewrite the 1999 constitution, providing greater freedom of action and, presumably, allowing the government-dominated and -directed assembly to rewrite permanently the rules of Venezuelan governance eliminating the last vestiges of democracy and turning the nation, after Cuba, into the second fully totalitarian state in the Western Hemisphere.  Meanwhile, the economy continues to contract, crime is out of control, and food and medical supplies are increasingly unreliable.  The death toll from government repression, common crime, starvation, and otherwise-preventable medical conditions continues to climb.

The United States, China, and other nations are now faced with the decision as to whether they will accept these realities as a fait accompli, or whether they will work together to put Venezuela on a more sustainable political and economic course.  The United States maintains a full toolbox which it could employ, but for political and historical reason prefers to take a lower profile and allow others to take the lead.  In the continued absence of alternative leadership, however, such a posture is increasingly untenable as the regime in Caracas radicalizes.  Further steps might therefore include additional sanctions against individuals for corruption and human rights abuses, cancellation of visas, efforts at the identification, seizure, and forfeiture of ill-gotten gains, visible attempts to provide humanitarian assistance to refugees crossing borders into Colombia, Brazil, and the Caribbean, and even, conceivably, steps to recalibrate energy relations.

For its part, China, with some $60 billion of loans outstanding to Venezuela, also maintains significant interests and can play a new and constructive role in resolving the crisis.  Beijing’s primary interests, after all, include the repayment of loans and the continued access to Venezuela’s immense hydrocarbon reserves.  They do not necessarily include the maintenance of the Maduro government in power, even though Chinese engagement has supported his rule, and before him, Hugo Chavez.  At some point soon, Beijing will have to determine whether China stands a better chance of realizing its fundamental interests by supporting Maduro or by working with the international community to press for change.  As the saying goes, if something can’t last forever, it won’t.  And the only way the unpopular Maduro government can last is by becoming increasingly authoritarian and dictatorial, against the wishes of its own people.

The primary risk in supporting the status quo is that, if the opposition is able eventually to gain national leadership, it may not feel compelled to abide by the terms of previous agreements struck with an anti-democratic, repressive government.  It has already said as much.  Better for China than aligning with such a government would be to encourage, likely through the UN Security Council or other appropriate forum, a political rebalancing in Venezuela that would protect its interests over the longer term.

That’s not to say political change is imminent.  Robert Mugabe has remained in power in Zimbabwe, after all, since 1979, and he has no oil to exploit.  But the people of Venezuela, including the government’s own political base in the poorer communities, are pressing for change every day in the streets, especially as the late July constitutional assembly looms and prospects for peaceful resolution of the crisis diminish.  A reckoning is coming.

Were China to express support instead for the constitutional process in Venezuela—implicitly rejecting the proposed constituent assembly in late July—while calling for a rejection of violence, humanitarian assistance, release of political prisoners, and new elections, the nation would join an emerging international consensus working to forge a new, more sustainable path for Venezuela.  Ultimately, it would be a path more likely to protect Chinese interests, including a strategic leap into the Western Hemisphere not just as a trading and investing nation but as a political partner and pragmatic problem solver.

This would be a historic shift in hemispheric relations which a distracted Washington would most likely welcome.  It’s not the approach that China normally takes internationally, but then again, the expectations surrounding foreign engagement in Latin America are different than elsewhere.  Partnership requires adherence to regional norms, as Beijing continues to find in its regional dealings.  No better time for China to begin than today.