The China-US Relationship Must Hold 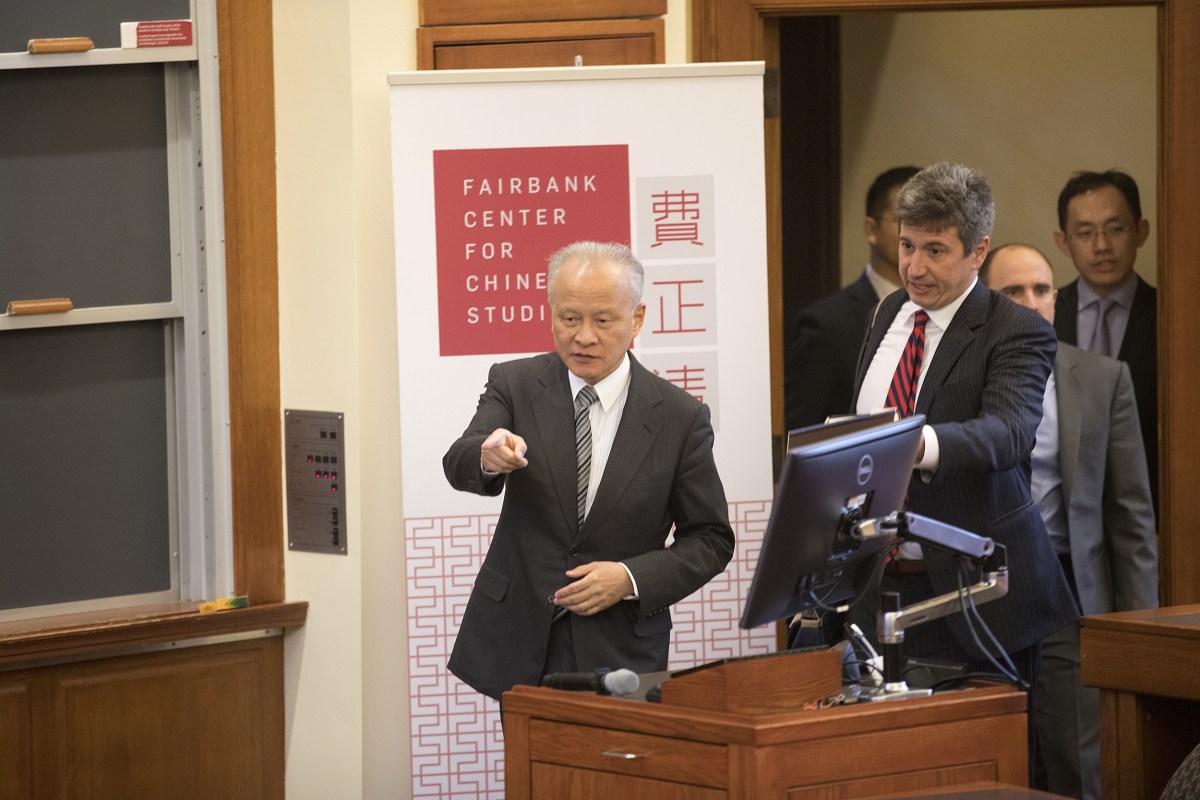 A version of this speech was delivered at the Fairbank Center for Chinese Studies, Harvard University on April 17, 2018.

There have been accusations against China for being a so-called "revisionist power" attempting to overturn the existing international order. I think this is a gross misinterpretation of China's intentions. When we talk about the international order, we are referring to the one that was established at the end of the Second World War with the United Nations system at its core and the UN Charter as its basis. The principles of the UN Charter lay out the basic norms of international relations, such as sovereign equality among member states, peaceful settlement of international disputes, obligations of member states to refrain from threats or force against the territorial integrity and political independence of other countries, and non-interference in matters essentially within the domestic jurisdiction of member states.

China has been committed to all these principles. And we have a very strong track record in this regard. China is always opposed to the threat or use of force in international relations unless it is authorized by the United Nations Security Council under the UN Charter. China has always advocated solving international disputes through dialogue and negotiation. This has been our position on so many difficult international issues, including the Korean nuclear issue, and China has made consistent efforts to this end. We will continue to speak out for the sovereignty, territorial integrity and independence of all UN members, particularly the small, weak, and poor countries.

By contrast, there have been so many cases of violating these principles. Threats or uses of force have frequently violated the sovereignty of member states, and wars were started without UN Security Council authorization, or even in defiance of clear opposition from Security Council members. Chaos and bloodshed have occurred in the name of "humanitarian intervention" or "responsibility to protect".

The first sentence of the UN Charter goes, "We the peoples of the United Nations, determined to save succeeding generations from the scourge of war, which twice in our lifetime has brought untold sorrow to mankind." Have we really succeeded in doing so in the last 70 years and more? Will we be successful to save the current and future generations from the scourge of war in the years to come? This is still an open question.

Unfortunately, the very people who are responsible for all such violations are now pointing the finger at other countries as "revisionist powers". Honestly I think these people should have a better sense of shame. I think it is high time for us to review and reaffirm these basic principles so that we can have a better and more effective international order.

In our efforts to stabilize and strengthen the international order, the key is to have stable relations among major powers, and perhaps most importantly stable relations between China and the United States. We will mark the 40th anniversary of the diplomatic relations between the two countries early next year. Confucius once said, "At forty, one will no longer suffer from perplexity." But the reality is that people are still often perplexed on so many issues. I think there is a need to clear up some of the confusion about the important relationship between China and the United States.

First, forty years of diplomatic ties and cooperation have served the interests of both countries quite well. In addition to all the benefits we have gained from this relationship, we have also seen its positive impact in the broader region of the Asia-Pacific and the world. For instance, two of the largest hot wars during the Cold War era took place in Asia. But today, thanks largely to the good relations between our two countries, the Asia-Pacific is on the whole peaceful and stable. Even problems like the Korean nuclear issue are under control. Plus, our two countries have also helped to make the Asia-Pacific one of the main engines of global economic growth. We have overcome two financial crises – the Asian financial crisis in the late 1990s and the international financial crisis that broke out about ten years ago. According to the IMF, Asia contributed two-thirds of global economic growth in the last two years. I think China and the U.S. can take a lot of credit for that.

Of course, the U.S. policy of engagement with China was designed to serve its own interests. As President Nixon said to Chairman Mao Zedong and Premier Zhou Enlai during his first visit to China, "I have come for American interest." And this relationship has served both countries quite well, and the mutual needs and common interests that we have between us are still expanding. There are so many international and regional issues we have to work on together. And there are so many global challenges we have to respond to together because we are both permanent members of the United Nations Security Council and the two largest economies in the world. We do share common interests and responsibilities in maintaining global peace and stability, and in promoting global economic growth and prosperity. This is our responsibility to the international community.

At the same time, each of our countries has its own important domestic agenda to accomplish. A stable relationship between us will help us accomplish our domestic goals better.

Of course, there is a certain degree of competition between us. This is inevitable. But as long as we both follow basic international norms, as long as the competition is fair, constructive, and mutually stimulating, such competition will serve the long-term interests of both countries. What is more, for big countries like China and the U.S., the real competition is not in international affairs, but in our respective domestic governance. If we have good governance in our own country, nobody else can threaten or change us. If we fail to have good governance at home, nobody else can help us.

Naturally, there are always problems between China and the U.S., because we are very different in terms of history, culture, political system, and economic development. But we must distinguish different kinds of differences. On matters concerning sovereignty, territorial integrity, and national reunification, there is no room for compromise, and there is a red line. On economic and trade issues, solutions should be worked out through dialogue and consultation on the basis of mutual respect. Recently there has been much talk about a possible trade war between China and the United States. I want to make it clear here: Trade is about mutual benefit. War is about mutual destruction. A trade war serves no meaningful purpose. It will only destroy trade itself.

Looking forward, China-U.S. relations will have tremendous opportunities as well as challenges. The prospects will very much depend on the choices we make today. It will depend on what kind of mindset we have. If we allow ourselves to be dominated by a Cold War zero-sum mentality, then we will see traps and conspiracies everywhere. People could even become suspicious and fearful of new and positive ideas, such as the Belt and Road Initiative. People could even become suspicious and fearful of cultural exchanges and language learning. And for no good reason whatsoever, they could make other people's dream their own nightmare. If we have a more positive and cooperative mindset, we could see the emerging trends in the world, seize new opportunities, and turn challenges into opportunities. That will bring about real benefits for the peoples of our two countries.

Not long ago I read a book entitled "Hit Refresh" written by Microsoft CEO, Satya Nadella. He put forward the idea that people should have a positive mindset and learning culture. I was inspired by his open, positive, and forward-looking attitude. Maybe in international relations, we also have to hit the refresh button, so that we will have a better understanding of the new realities of the 21st century and the emerging trends of the world, and we can join hands in building a new model of international relations and community with a shared future for mankind. Otherwise, we might all be replaced by artificial intelligence someday.

I first came to the United States in 1981. And now altogether I have spent more than 11 years in this country, as a student, as a UN employee, and then as a diplomat. What I learned in the U.S. has changed my life, my work and my perception of the world to a great extent. And the influence has been quite positive. But more recently, I feel a little bit puzzled and confused. I ask myself, is the America I used to know – an open, confident, optimistic America – still there? Since I cannot find the answer in Washington, D.C., I have come to Harvard today. I am sure you will give me a good answer.

A Community of Shared Destiny for Mankind with Win-Win Cooperation at Its CoreTrade WarUS-China Rivalry
printTweet
You might also like
Back to Top
CHINA US Focus 2018 China-United States Exchange Foundation. All rights reserved. Disclaimer