Although Donald Trump praised his first visit to Europe as a great success, US allies across the Atlantic think otherwise. If visiting the Middle East before Europe more or less upset European partners, his words and deeds at the NATO and G7 summits were even more worrying. So much so that some have even said the biggest success of his visit was driving allies farther away from the US.

The multi-billion-dollar arms deals with Saudi Arabia didn’t seem to have satisfied Trump’s appetite. At the May 25 NATO summit, he vented dissatisfaction with NATO allies, saying 23 of the 28 members had failed to pay what they are supposed to for the protection they enjoy, repeating his previous complaint that this is not fair for American taxpayers. 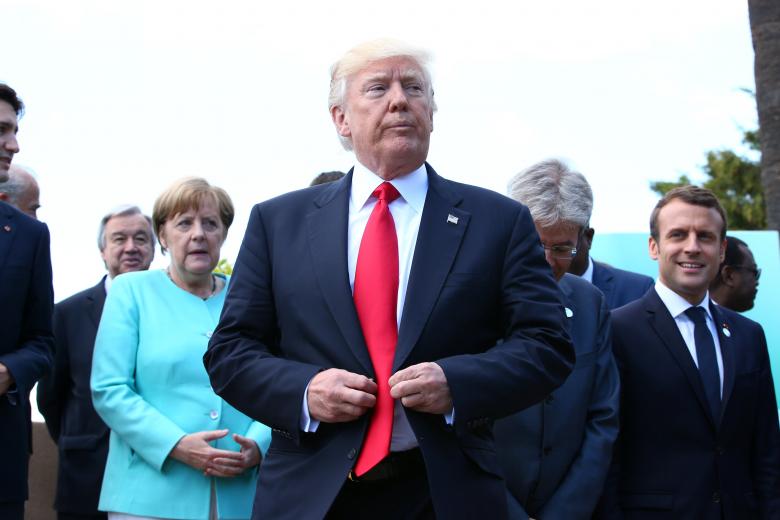 As the largest military grouping formed by Western countries, NATO has a defense expenditure that accounts for nearly 70 percent of the global total. Since NATO was launched and dominated by the US, for a long time the latter has shouldered around 70 percent of its expenditure. According to a CNN report, NATO members reached a consensus at its 2014 summit, deciding that each member country should devote 2 percent of its GDP to national defense in the following decade. But each country can decide its own military expenses, and there are no oversight or punishment mechanisms.

So far, only the US, Greece, Estonia, Great Britain and Poland have reached that goal, with the US devoting as much as 3.6 percent. Which was why Trump had been making such comments as NATO is “obsolete”, “useless”, vowing to roll back the security guarantee for allies and partners, including NATO allies.

In so doing, Trump was highlighting the need to share responsibilities and expenses. He has repeatedly urged NATO members to increase military expenditure, and reduce the US’ financial burdens. In March alone, he expressed dissatisfaction with inadequate NATO contributions on five occasions. This NATO summit presented him a perfect venue to vent his discomfort face-to-face.

NATO allies, however, do not fully subscribe to Trump’s theory. They believe NATO’s functions have far outgrown its initial purpose of protecting Europe; instead, it is extending to globalization and multiple roles under US dominance. It is thus logical for the US to pay more. Besides, since the US is paying no less on security for non-NATO countries, it is unfair to blame NATO countries for contributing too little.

Since Trump has been trumpeting against globalization, and threatening to withdraw from the Paris Agreement Barack Obama had signed on behalf of the US, the G7 summit in Sicily was one of discord and pessimism.

Though the final joint statement did cover consensuses on world economic growth, trade, multiple regional hotspots, cyber security, African development, and innovation, there was no satisfying progress on the two critical topics of climate change and trade liberalization.

Leaders of all other G7 countries pledged in explicit terms to honor their promises in the Paris Agreement as soon as possible, and at the same time tried to persuade Trump to observe the previous administration’s commitment and stay within the Paris Agreement framework. Yet Trump has ultimately chosen to withdraw.

Trade rules were an important topic of discussion at the G7 summit. Trump had declared withdrawal from TPP, proposed to renegotiate TTIP, and reshuffle NAFTA before the meeting. Trade and investments between main Western economies face various disruptions resulting from the “Trump revolution”. Instead of narrowing gaps, Trump’s conservative, stubborn attitude further estranged Western allies.

Actually Trump has a clear and resolute agenda, that is to put America first and “make America great again”. Returning home, Trump bragged about a “home run” at each stop during his five-country, eight-day trip. But in the eyes of Europeans, Trump showed contempt of European trade partners, lacked respect for NATO allies, and was full of selfish US-centralism.

With Britain withdrawing from the EU, NATO and G7 become even more important in maintaining US-Europe relations. Yet Trump’s flip-flops, passivity and zero-sum calculations have made Europeans realize they can count on neither Britons nor Americans, and the post-WWII diplomatic regime built on Western values is undergoing reshuffle. After the G7 summit, German Chancellor Angela Merkel openly stated the US and Britain are no longer reliable allies, and clearly was not speaking only for Germany.

Trump’s attitude has also dealt a blow to the UN. UN Secretary-General António Guterres said on May 30 that he was trying to persuade the Trump Administration to continue paying attention to foreign aid and diplomatic investment so as to secure US global leadership. He warned if the US forsakes that role, others will take over. According to a Reuters report, Trump plans to cut the US budget for diplomacy and foreign aid by one-third, or about $19 billion, including $1 billion for UN peacekeeping and funds earmarked for other international organizations.

In fact, it all boils down to one core problem: The present-day US is no longer what it was, and has to tighten its belt now.

G7 SummitDonald TrumpUS-EU Relations
printTweet
You might also like
Back to Top
CHINA US Focus 2018 China-United States Exchange Foundation. All rights reserved. Disclaimer