Trump Does Asia – From Competition to Opportunity 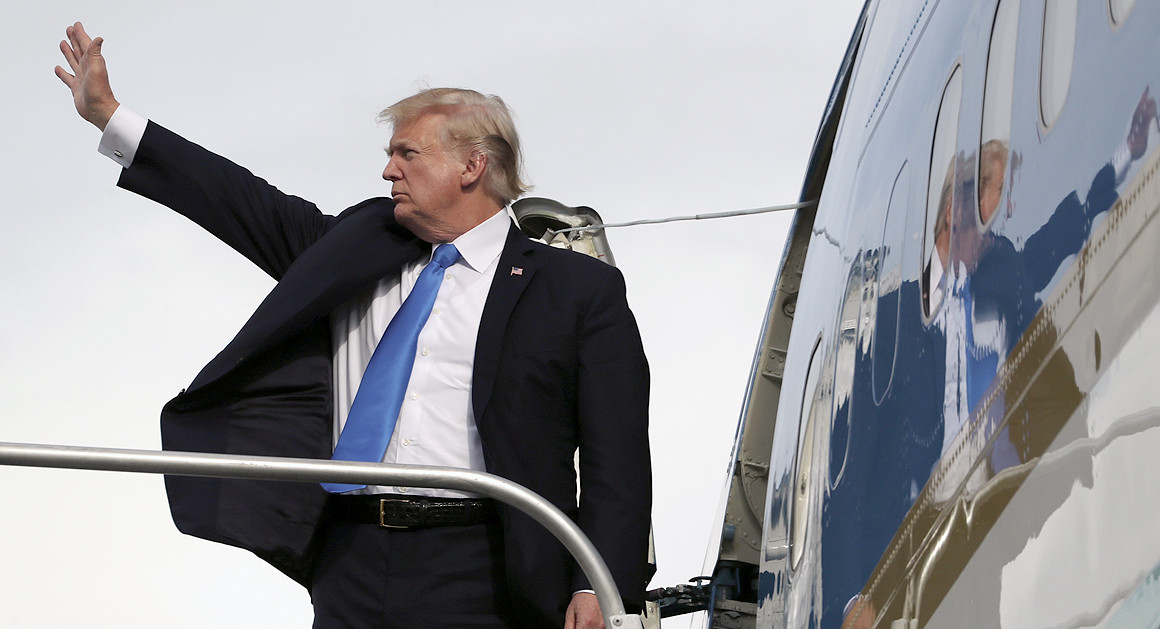 President Donald Trump waves goodbye as he enters Air Force One after participating in the East Asia Summit in Manila, Philippines, on Tuesday. (Andrew Harnik/AP)

Diplomatic history has its ironies. In the Obama era, U.S. President initiated a pivot to Asia that he had little time to visit. In the Trump era, U.S. President has been so busy fortressing America against the world that he has had to spend more time in Asia to tame rumors about U.S. disengagement.

This time President Trump’s strategic objective was in lucrative deal-making, which proved historical. In the future "America First" issues are likely to return with gusto, especially as the White House’s future is overshadowed by the Mueller investigation at home.

Golf, trade and arms in Japan

Besides golf with Prime Minister Shinzo Abe, Trump had a good reason to start his Asian tour in Japan. Outside of North America, Japan is America’s third-largest export market and second-largest source of imports. Japanese firms are the second-largest source of foreign direct investment (FDI) in the U.S., and Japanese investors are the largest foreign holders of U.S. treasuries.

The aging Japan has a critical role in a containment scenario, which Washington would seize against Beijing, should the U.S.-China bilateral relations fall apart.

Ever since Trump withdrew from the Trans-Pacific Partnership (TPP), the White House’s focus has been on a redefined bilateral trade deal with Japan that would also include significant arms deals. Strategically, the alliance rests on the forward deployment of 50,000 U.S. troops and other U.S. military assets in Japan, including the controversial Okinawa base.

After decades of secular stagnation, Japanese politics has been more stable after the victories of Abe’s Liberal Democratic Party in the 2012, 2016 and 2017 elections. But instead of seizing the historic opportunity to use political consolidation to reignite the Japanese economy, Abe has pursued controversial strategic initiatives, including re-militarization, the U.S.-style 2015 security legislation, and renuclearization.

Since the early 1950s, the Mutual Defense Treaty has allowed the U.S. to dominate South Korea’s military defense. Today, some 29,000 U.S. troops are based in the country, which is included under the U.S. “nuclear umbrella.”

However, after the Park impeachment, South Korea opted for a strategic U-turn in economy and strategic relations. Elected in May 2017, President Moon Jae-in is no friend of the U.S. anti-missile system (THAAD); he supports sanctions against North Korea, but only as long as it is aimed at bringing Pyongyang to the negotiating table. Moon does not accept the past Park-Obama “sanctions-only” approach toward North Korea, which the Trump administration has escalated with its “maximum pressure” principle.

Realistically, the harder Trump will push Seoul economically, the more he will stand to lose strategically – and vice versa.

Historic deals to avoid a clash with China

In 2016, U.S.-China trade amounted to $579 billion, while Trump’s singular focus is on the $368 billion trade deficit. Yet, merchandise trade is only one aspect of the broad bilateral economic relationship. Today, China is U.S.’s second-largest merchandise trading partner, third-largest export market, and biggest source of imports.

During his tour, Trump was accompanied by CEOs of 30 companies. Hungry for huge deals, the last thing they wanted was Trump to undermine access to the $400 billion Chinese market, based on U.S. exports to China, sales by U.S. foreign affiliates in China, and re-exports of U.S. products through Hong Kong to China.

In Beijing, the Trump Administration more moderate approach toward China paid off – as evidenced by the historic $254 billion deals.

Trump’s tour featured two major Association of Southeast Asian Nations (ASEAN) nations, Vietnam and the Philippines. Since Obama’s military pivot to Asia, Washington has morphed its relationship with Vietnam into a “strategic partnership.”

Vietnam’s rapid growth in bilateral trade can be attributed to the post-1986 domestic economic reforms and U.S. extension of normal trade relations (NTR) status in 2001.

Based on U.S. data, bilateral trade soared from $220 million in 1994 to $45 billion in 2015, which has turned Vietnam into the 13th-largest source for U.S. imports (but only 37th-largest destination for U.S. exports). To Washington, Vietnam is a ‘mini-China’: the second-largest source of U.S. clothing imports, a major source for electrical machinery, footwear, and furniture. While Washington seeks to protect U.S. agricultural interests against Vietnam, the latter sees the regulation of its catfish-like basa imports in the U.S. as protectionism.

Vietnam is hedging its trade bets. While it was a willing participant in the TPP, it is a party to negotiations to the Regional Comprehensive Economic Partnership (RCEP), a pan-Asian regional trade association that currently does not include the U.S. but promotes the interests of emerging nations in Asia Pacific.

Duterte recalibration between U.S. and China

Washington’s ties with its former colony the Philippines grew deep during the controversial Marcos years (1965-86), which led to the end of the U.S. bases in the country (1947-91) and the departure of U.S. forces from the Philippines, and during the Aquino III years (2010-16), which resulted in the Enhanced Defense Cooperation Agreement (EDCA), the return of U.S. forces to the Philippines, rearmament with Pentagon’s support and the escalation of maritime conflicts with China.

However, the twin periods of close U.S. ties coincided with deep strategic dependency on U.S., increasing economic polarization within the country and the spread of drugs, corruption and questionable “narco ties” with the pre-2016 regime.

Since the 2016 election triumph of Rodrigo Duterte, the U.S.-Philippines relationship has been subject to a recalibration and, in the end of the Obama era, alleged U.S. efforts at destabilization. Duterte’s sovereign foreign policy is less reliant on U.S. security guarantees and benefits from economic relations with China – even as he has been developing more constructive personal ties with the Trump White House.

Duterte has also been able to link the Philippines into the China-supported One Road One Belt (OBOR) initiative, which is vital to his government’s huge “Build, Build, Build” infrastructure program that is paving way to the tripling of the Philippine per capita incomes in the next 25 years.

ASEAN tribute to the not-so-benign hegemon

Trump seeks to review and renegotiate many of the existing trade deals, while challenging the U.S. postwar hub-and-spoke system of security alliances in the region. Unsurprisingly, then, several Association of Southeast Asian Nations (ASEAN), countries – such as Malaysia, Thailand and Singapore – that were not included in the current tour sought to preempt pressures.

Prime Minister Prayut Chanocha promised Thailand would buy Blackhawk and Lakota helicopters, a Cobra gunship, Harpoon missiles and F-16 fighter jet upgrades, plus 20 new Boeing jetliners for Thai Airways. Siam Cement Group agreed to purchase 155,000 tons of coal while Thai petroleum company PTT will invest in shale gas factories in Ohio. Prayut and Trump signed an MOU to facilitate $6 billion worth of investments that could create over 8,000 jobs in the U.S..

Tiny but wealthy Singapore followed in the footprints. Prime Minister Lee Hsien Loong showcased Singapore Airlines’ deal with Boeing for buying 39 B787 and B777-9 aircraft, which – as it was said – could create 70,000 jobs in the U.S..

That is the regional way to offer dollar-tribute to the U.S. hegemon.

Trump’s Asian tour was also about the hard sell of military assets across the region. According to SIPRI, increases in global military spending are now driven by demand in Asia, along with the Middle East. During the Obama military pivot to Asia, Asia/Oceania received most of global imports (43%). Of the 10 largest importers in 2012-16, half were in India, China, Australia, Pakistan and Vietnam.

U.S. dominates imports to its key security allies in East Asia and Oceania; Australia, Japan, and South Korea. In the past, these were thriving economies; today, they are aging and slowing. Growth markets are in emerging Asia, which is less prosperous and thus not willing to pay the U.S. price premium, especially with more cost-efficient arms rivals, such as Russia.

When President Obama gave eloquent speeches about peace, his pivot to Asia contributed to maritime conflicts in the region fueling demand for weapons.  But Pentagon did not cash the profits. Russia accounted for most arms deliveries to Asia and Oceania (37%), followed by the U.S. (27%) and China (10%).

And despite U.S.-India strategic cooperation, Russia dominated arms imports in India (68% of total imports) and Vietnam (88%). Meanwhile, China has become a major arms supplier in Pakistan (68%), Bangladesh (73%), and Myanmar (70%).

From TPP lite to real free trade in Asia Pacific

After Japan, South Korea, China and Vietnam, Trump attended the Asia Pacific Economic Cooperation (APEC) Summit in Danang, Vietnam, followed by the 50th Anniversary of ASEAN and 40th Anniversary of the U.S.-ASEAN Relations in Manila.

While trade ministers from 11 countries announced they would push ahead with a TPP lite, Abe may have seen the newly-named Comprehensive and Progressive Agreement for Trans-Pacific Partnership as a rival to the China-supported RCEP. In reality, it is a shaky TPP lite that will serve as a face-saving measure to him but as a hedge option to other 10 nations.

With the failed original TPP, the "America First" doctrine, Washington’s polarization and the impending impasse of the Mueller investigation, APEC hopes for greater U.S. initiative in the region rest on quick-sand. The best APEC may hope for is long-term U.S.-Chinese cooperation for the Free Trade Area of Asia-Pacific (FTAAP), which focU.S.es on trade and investment and has room for both the U.S. and China.

In this view, the U.S. has a role in the ASEAN Economic Community (AEC), APEC and the U.S.-ASEAN Connect Framework – as long as its engagement rests on economic cooperation, not geopolitical destabilization. In turn, the ASEAN nations’ integration plan AEC 2025 can benefit from China’s globalization initiatives, particularly the OBOR and the Asian Infrastructure Investment initiative (AIIP). In contrast, an enforced "America First" doctrine would undermine ASEAN 2025 goals.

In a defiant address, Trump told the APEC meeting that the U.S. would no longer tolerate "chronic trade abU.S.es,” while Xi announced that globalization was irreversible. What got lost in the translation was the intriguing fact – and historical opportunity – that the Trump and Xi visions need not be seen as exclusive.

In fact, both the U.S. and Chinese visions support globalization, but with caveats. Both criticize the old multilateral international banks, though for different reasons. Both believe in rebalancing that is not accompanied by excessive trade deficits and foreign investment that should benefit both investors and destinations.

It is not the competitive U.S.-China visions that offer a new path to the future in Asia Pacific. Rather, it is the inherent commonalities in these approaches that could sustain trade and investment in the region – and globally.

Donald TrumpPivot to AsiaChina-US Relations
printTweet
You might also like
Back to Top
CHINA US Focus 2018 China-United States Exchange Foundation. All rights reserved. Disclaimer