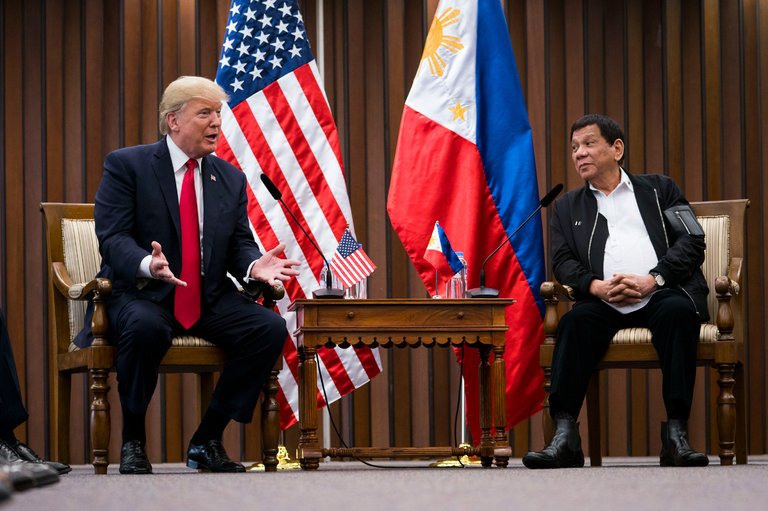 Worries proliferated during the 2016 U.S. presidential campaign that the election of Donald Trump would signal drastic changes in Washington’s foreign policy. Based on candidate Trump’s comments, many of America’s allies in East Asia, Europe, and the Middle East were fearful that a major retrenchment of Washington’s commitment to their security would take place. Those fears proved mostly unfounded. Although the Trump administration has intensified long-standing U.S. demands for greater burden sharing, the principal features of America’s alliance relationships remain largely unchanged. Both the president and his key advisers have reemphasized Washington’s solidarity with its allies on several occasions.

However, Trump’s public affinity for several authoritarian regimes, regardless of their flagrant human rights abuses should concern all. During his state visit to Manila in mid-November, Trump stressed his “great relationship” with the Philippines president Rodrigo Duterte, and praised him for his leading role in the Association of Southeast Asian Nations. Noticeably, Trump did not mention Duterte’s notorious war on drugs, which has led to the deaths of several thousand accused traffickers and users—nearly all without trials or any semblance of due process.

Duterte’s decision to unleash death squads in a fashion that has received condemnation from the leading members of the U.S. Congress, as well as numerous international human-rights activists, including Human Rights Watch. In addition, there is evidence that the Philippines president is using the war on drugs as a façade to harass and intimidate political opponents, most notably Senator Leila de Lima. Yet, Trump expressed not a single word of criticism. He exhibited the same passive acceptance about other manifestations of Duterte’s autocratic behavior. During their joint press conference, the Philippines leader ordered reporters expelled from the room. That move was emblematic of his contemptuous attitude toward the news media, but Trump seemed perfectly content with their expulsion. Indeed, he laughed when Duterte denounced them as “spies.”

Such a blasé attitude toward Manila’s mounting authoritarianism is disturbing. In addition to his other abuses, Duterte has threatened to impose martial law on the entire country. Indeed, he subsequently threatened to jail critics of his decision to implement martial law on the island of Mindanao, where an armed insurgency continues to simmer. That is extremely ominous behavior on the part of a supposedly democratic leader. The U.S.’ official indifference to such abusive conduct is reminiscent of the Nixon administration’s implicit endorsement of similar moves by a previous would-be dictator. At that time, Washington accepted, and even seemed enthusiastic about former Philippine president Ferdinand Marcos’ imposition of martial law in 1972, a move that wrecked the country’s democratic system for the next 14 years until Corazon Aquino’s “people’s revolution” finally ousted him.

If President Trump’s fondness for Duterte were an aberration, it would be worrisome enough.But his behavior toward other “friendly tyrants” suggests that it reflects an overall policy preference. The new administration has worked assiduously to strengthen relations with Turkey, even as President Racep Tayyip Erdogan systematically dismantles that country’s democracy. Trump himself has lavished praise on Erdogan, calling him a personal “friend,” and giving his leadership “very high marks.” Yet the Turkish leader has jailed tens of thousands of critics, and has virtually destroyed Turkey’s free press. Indeed, his government is currently incarcerating more journalists than any other regime. A growing number of critics in the United States and Europe are calling for NATO to expel Turkey because of the growing human-rights abuses. Yet, once again, Trump appears to be quite content with Erdogan.

More evidence of Trump’s fondness for autocrats came during his May 2017 state visit to Saudi Arabia. His supplicant behavior, including accepting an ostentatious award from the Saudi government, was profoundly embarrassing. His attitude also had major undesirable policy implications. Trump intensified his support for Riyadh’s atrocity-ridden war in Yemen and backed the Saudis when they initiated a destabilizing feud with Qatar. Worse, the administration seems to be siding mindlessly with Saudi Arabia in its long-standing regional power struggle against Iran. Aside from the worrisome foreign policy implications, Saudi Arabia is a totalitarian theocracy with one of the worst human-rights records in the world. Witnessing an American president fawning over such a regime is an appalling sight.

With the end of the Cold War, Washington’s commitment to democracy and human rights has become more sincere and consistent. That change created problems of its own, especially the foolish humanitarian and regime-change wars in such places as the Balkans, Iraq, and Libya. But the policy has at least diminished the stain of hypocrisy. Unfortunately, Trump’s embrace of authoritarian regimes has reversed any of that progress, severely damaging the U.S.’ longstanding foreign policy approach, but more importantly, the lives of civilians in countries like the Philippines.

US Foreign PolicyDuterte
printTweet
You might also like
Back to Top
CHINA US Focus 2018 China-United States Exchange Foundation. All rights reserved. Disclaimer