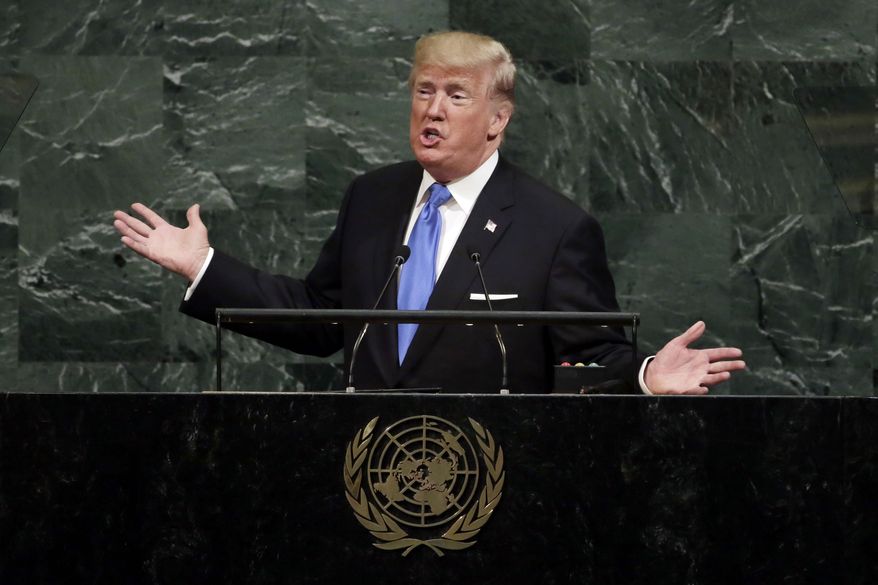 In his first speech to the U.N. General Assembly, President Trump challenged other nations to take a stand against "a small group of rogue regimes," and he singled out North Korean leader Kim Jong-un as the most urgent danger. (Associated Press)

US President Donald Trump, addressing the 72nd Session of the United Nations General Assembly in New York in September, branded North Korea, Iran, and Venezuela as “a small group of rogue regimes” and “the scourge of our planet today”. He labeled North Korean leader Kim Jong-un as a “rocket man on a suicide mission for himself and for his regime”, and threatened to “totally destroy North Korea”. He called Iran “a corrupt dictatorship behind the false guise of a democracy”, whose main “exports are violence, bloodshed and chaos”. Trump described the Venezuelan government as a “corrupt regime” of the “socialist dictatorship”. Trump also announced an additional military and defense spending of $700 billion, to make the US military the “the strongest it has ever been”.

The US media said Trump’s speech at the United Nations shattered the norms for US presidents and politics, and that “no American president has ever spoken to the world like this”. CNN said in a commentary that in his speech “Trump unprecedentedly applied the disruptive, bellicose, nationalistic persona”. Such an approach will probably be characteristic of Trump’s administration, which illustrates the core features of “Trumpism” - a nationalistic “America First” foreign policy at odds with globalization. A Los Angeles Times report mentioned that Trump’s speech had been vetted and reviewed by several of his senior advisers. Therefore, it can’t be dismissed as “insane babblings by a political madman”, but merits serious examination and review.

As early as at the end of Cold War, American linguist Noam Chomsky pointed out that as the sole economic and military superpower, the United States was aiming to dominate and control the world, and then have the world’s resources at its disposal. The US wants absolute access to every market. To the US, the Third World is nothing but its market, sources of resources, investment destinations, places for pollution shifting, sources of cheap labor, tax havens, and talent reserves. Any country that won’t help it get what it wants will naturally be considered a barbarian and would in principle be slaughtered and eliminated. In fact, the US does not really have any security concerns, what it wants is to defend the global “security market” so as to guarantee its fat profits from its high-tech military industries. Because the world is always full of turmoil and risk, which can be easily manipulated, the US has always used security as the pretext to strengthen its military and technological power, and to apply deterrence and containment policies towards other nations.

US foreign policy since September 11th proved Chomsky’s words. Before Barack Obama was elected, he promised to bring an end to the Afghan and Iraq wars and was thus awarded the 2009 Nobel Peace Prize. After he became president, he continued the two wars, sent Special Forces to Syria, and approved air raids against Libya, Pakistan, Somalia, and Yemen, meaning the US was carrying out military operations in seven countries. Then Libyan leader Muammar Gaddafi had completely abandoned his nuclear program and even allowed CIA officers to conduct on-site inspections and verification, but the US and the NATO still used force to overthrow his government and devastate his country. When Obama’s presidency ended, the US military was still fighting in Afghanistan, Iraq, and Syria, and the US was at war every single day during his two terms in office.

During the presidential campaign, Trump also promised a military withdrawal from Afghanistan. On August 21, however, he announced an indefinite military presence in Afghanistan to defeat the terrorists, because the US had made tremendous sacrifices in Afghanistan, and therefore deserved to “seek an honorable and enduring outcome”. According to a New York Times report, from the start of the Afghan War in 2001 to September 30, 2015, US military spending in Afghanistan amounted to $780 billion, and military contractors made huge profits out of the war. If the $780 billion had been spent domestically, it could have created 14 million jobs in infrastructure construction within one year, or provided 23.48 million four year scholarships for university students, or provided minimum healthcare services for 219 million people for one year.

According to estimates made by the Federation of American Scientists, North Korea now has the capability of making 10 to 20 nuclear warheads, but it’s unclear whether its missiles have the capability of carrying and delivering nuclear warheads. In comparison, the US has 6,800 nuclear-tipped missiles, including 1,650 strategic nuclear missiles and 150 non-strategic nuclear-tipped missiles, all of which are in combat status and could be launched at any minute. In this sense, North Korea’s military prowess is no match for that of the US. What actions the Trump administration will take against countries such as North Korea, Iran and Venezuela remains to be seen. It is certain, however, that the US considers only how to use the situation to achieve its goals and to benefit itself.