What Does the China-Britain Rapport Mean?

Chinese President Xi Jinping paid a four-day state visit to Britain from Oct 20 to 23, during which the two countries signed cooperation agreements worth a combined 40 billion pounds, including Chinese investment in a British nuclear power facility. Leaders of both countries announced that Sino-British relations have thus entered a “golden era”. In the joint declaration published after Xi and British Prime Minister David Cameron had talked, both countries promised to build a “global comprehensive strategic partnership oriented to the 21st century”. 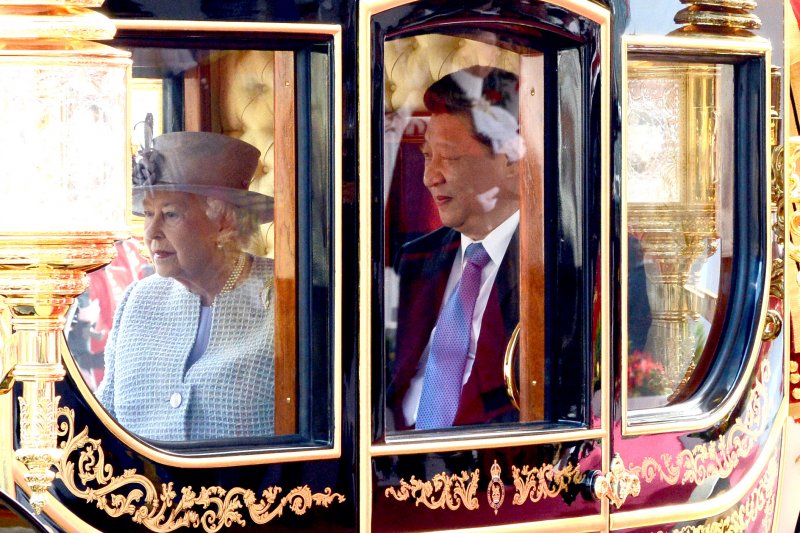 How has all this happened? What does it mean to Anglo-American relations when Britain seeks closer ties with China?

To answer these questions, we should first look at how Britain looks at China. An important fact is Britain has developed a positive view of China in recent years. When Cameron first assumed the UK premiership in 2010, Britain’s traditional markets, including the European Union and United States, were caught in the most serious economic and financial crises since the end of World War II amid the sweeping international financial crisis and European debt crisis. That undoubtedly consolidated Britain’s determination to establish strong relations with China. During his first China visit in 2010, Cameron had unequivocally refuted the “China threat” theories, and stated China’s rise is an opportunity for the world to develop, to conduct trade exchanges with China, and to jointly meet global challenges. There had once been tensions in bilateral ties afterward. Since Cameron met with the Dalai Lama in defiance of Beijing’s opposition, the exchange of high-level visits between the two governments came to a stop. But bilateral ties have come back on track following Cameron’s December 2012 visit to China.

It seems to me that Britain’s pursuit of closer ties with China is mainly based on the latter’s continuously expanding international influence, especially in the economic fields. Economic and financial cooperation has been a key topic in the two parties’ frequent high-level interactions.

The British economy is one of the fastest growing in Europe (with GDP growing 2 percent in 2014). But such growth lacks sustainable impetus. Cameron and Chancellor of the Exchequer George Osborne are trying to boost economic growth through expanding infrastructure construction at home. The most imperative project is building a new nuclear power station to diversify energy supply. Britain was one of the first countries to utilize nuclear energy, but has not built any new nuclear power plant in the past 30 years. So it has very high expectations for Chinese nuclear-power enterprises and Electricite De France to collaborate and build a next-generation nuclear power facility for it. Britain is not only in need of Chinese capital, but also very interested in Chinese technology for next-generation nuclear power plants. According to the agreement reached during Xi’s visit, China will have a 33.5 percent stake in the 18-billion-pound Hinkley Point nuclear power station. The signing of this agreement is a significant milestone.

Britain also expects China to invest in its second high-speed railway, or HS2. Construction of HS2 will include two phases: First from London to Birmingham, then extends northward to Manchester and Leeds. HS2 construction is an important part of Britain’s plan for a northern economic growth center. The plan was intended to address development gaps between the country’s northern and southern regions.

Expanding British exports to China is also an important consideration behind Britain’s decision to seek closer ties. Despite slower growth in China, Osborne remains optimistic about China’s economic prospects. He believes that, with the Chinese economy turning from investment-driven to consumption-driven, British firms, which excel in service industry, can anticipate a bigger market.

Financial cooperation is also significant. This certainly is a classic example of successful win-win cooperation. London is the largest foreign-exchange trade center in the world. For China, the City of London provides an ideal platform for internationalization of the renminbi. For Britain, that London becomes a main Western center for RMB transactions, liquidation and settlement is conducive to retaining its status and influence as an international financial hub.

Obviously economic needs are the most important reasons for Britain’s eagerness for developing “golden relations” with China. As British commentator Martin Jacques wrote in the Guardian newspaper, 10 years ago, when then Chinese President Hu Jintao visited, Britain’s GDP was slightly bigger than China’s; now the Chinese economy is already three times that of Britain’s in size.

Britain has maintained a “special relationship” with the US since World War II. Their cooperation in international affairs far outweighs divergences. People have thus been wondering in what way Britain’s recent rapport with China will affect its traditional partnership with the US.

In my opinion, Britain’s choice to strengthen ties with China doesn’t mean it will drift away from the US. Since the emphasis of its relations with China is on economy, Britain will continue to maintain and consolidate its “special relationship” with the US. In fact, since the Ukraine crisis broke out, Britain has stated repeatedly that NATO continues to play a pivotal role in European security. Considering the matter from a different perspective, we can find the Britain-China relationship may offer a fine example for US-China relations. That Britain and China, with divergent political systems and at different stages of development, could formulate a model of relations on the basis of mutual respect and win-win cooperation should be a source of inspiration for Sino-US relations.