President Xi Jinping’s just-concluded state visit to the United States will have extensive, far-reaching impacts not only on bilateral relations, but also on peace, stability and prosperity of the Asia-Pacific, as well as global affairs. Its rich and all-round achievements can be summed up in five aspects. 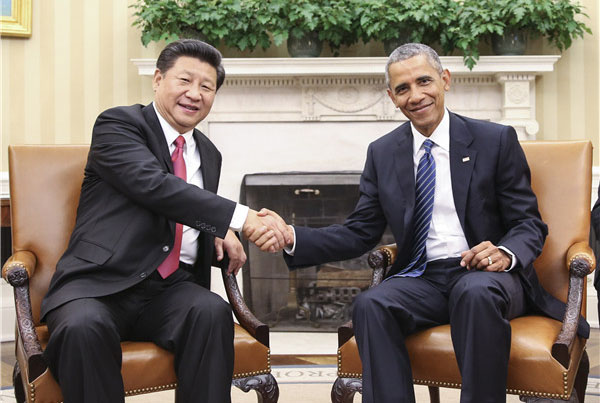 First, it affirmed the orientation toward building a new type of major-country relationship. The Chinese and US leaders reached the important consensus on building a new type of major-country relationship during their 2013 meeting in Sunnylands, California. Some changes have taken place in the past two years in the Asia-Pacific: The US and Japan readjusted security cooperation guidelines and enhanced their alliance; the US has been pressuring China on issues like the South China Sea and cyber security. Believing that the engagement policy which started from the Nixon era has failed, some people in the US advocate that the US should revise its engagement strategy, reduce cooperation with China, and strengthen containment instead. Some others stubbornly insist that conflicts and confrontation are inevitable between China and the US. Some Republicans competing for nomination as the GOP’s presidential candidate have also begun their China-bashing. In the past few months, the shadow over Sino-US relations seemed to have brewed considerable doubts about the relationship.

The two governments conducted strategic reassurance during President Xi’s visit. Xi expounded China’s relationship with the current international order, stressing that China is one of its participants, builders, and contributors, and, by launching such institutions as the AIIB, China is trying to improve it and make greater contribution to the international community. He made it very clear that China does not seek to dismember the existing international order and build a new one from scratch. In a speech on Sept 21 in George Washington University, US National Security Advisor Susan Rice also stated explicitly that Sino-US relations are a complex relationship, not a zero-sum game. Instead, it is a fruitful partnership for the US. US President Barack Obama also told the press after talking with Xi that a stable, prosperous and peaceful China will play a constructive role in international affairs. The visit has thus cleared the mist of suspicions surrounding bilateral ties, making sure that the relationship will continue to stay on track.

Second, it expanded pragmatic cooperation. Sino-US relations are interest-driven. Bilateral ties for more than three decades indicate that although there were ups and downs, even skirmishes, the relationship has by and large continued developing. The fundamental reason for this is that common interests far outweigh divergences between the two countries, and new common interests, new opportunities for cooperation, and new growth points for bilateral ties kept presenting themselves in different periods of time. Xi’s visit featured conspicuous emphasis on expanding cooperation. Sino-US relations have entered a new normal. But cooperation remains the centerpiece. Economic and trade ties have been the “driver” and “ballast” of bilateral ties, and will continue to be. The two sides agreed to substantially press ahead with BIT negotiations during the two leaders’ November 2014 meeting. They reiterated during this visit that negotiating a Sino-US BIT is the most imperative economic concern between the two countries, and agreed to forcefully push forward the negotiations. According to some American experts, the BIT may very likely be accomplished during Obama’s term of office. Sino-US interdependence will then reach a new, higher stage. The two sides also agreed to promote economic, trade, and investment cooperation between Chinese provinces and US states, which will surely be a powerful boost to the overall relationship. The two parties’ collaboration in such areas as agriculture, grain production, civil aviation, high-speed railways, law enforcement, and military-to-military relations will further deepen interdependence.

It is worth particular attention that the two parties’ achievement papers devoted considerable space to analysis of world economic conditions, as well as both parties’ commitment to promoting a strong and open global economy, inclusive growth and sustainable development. China and the US are the largest two economic entities in the world. Their economies account for a third of the global total in size. Correspondingly, they share major responsibilities for world economic conditions.  Powerful joint messages from the two will surely inspire confidence, and greatly boost world economic recovery, especially as all countries have run into economic troubles, world economic development remains unbalanced, and some countries are still struggling in the mire of debt crisis.

Third, it promoted Sino-US cooperation in global governance. Sino-US relations have displayed one evident characteristic: The ties have gone far beyond bilateral scope, with more and more global issues becoming new realms of Sino-US cooperation. Such a change has mainly derived from China’s development as well as its constantly increasing influence on international affairs. Ranking US officials, Rice included, have repeatedly acknowledged that it is difficult to meet global challenges without China and the US joining hands. China and the US maneuvered new, significant breakthroughs in global governance during Xi’s visit. The two sides confirmed that they will enhance cooperation under the G20 framework; ensure the continuous improvement of the international economic system; continue improving shares and quotas as well as governance structure of the IMF; push for success of the Paris climate change conference; communicate and collaborate over implementation of the 2030 development agenda, and help other countries achieve common development. The two governments also reached consensus on aid to some developing countries, enriching the connotation of Sino-US relations. Such achievements have left a strong impression: As its national strength grows, China is assuming increasing international responsibilities, and letting the international community share the dividends of its development.

Fourth, it expanded cultural and people-to-people exchanges. State-to-state relations rest ultimately on relations between their peoples. Proposed by leaders of both countries, a high-level consultation mechanism has been established between China and the US, greatly facilitating bilateral exchanges. Such links between China and the US have outshone China’s exchanges with any other countries, with more than 4 million people traveling back and forth across the Pacific each year. The two countries’ latest decision to increase consulates on each side will further facilitate such exchanges.

Fifth, the two parties conducted in-depth communication over differences. Disagreements between the two countries are a matter of fact, and will continue to exist in the future. In order to formulate a new type of major-country relationship, they will have to on one hand enlarge cooperation, on the other hand constructively manage and control their differences, preventing them from disrupting cooperation, or even leading bilateral ties astray to the path of confrontation and conflicts. During the visit, the two parties reached an agreement on cyber security, deciding to set up a dialogue mechanism and a corresponding hotline, showing it is possible to turn a matter of contradiction into an area of cooperation. In the press conference, Xi also stated that, on the South China Sea issue, the two countries not only have disagreements, but also have a lot in common. The visit has provided fresh experiences for managing and controlling differences.

Of course, one single visit can’t solve all problems between the two countries. But it is safe to say this visit has increased mutual confidence, reduced mutual suspicion, and the achievements and the experiences it offered have made it a milestone in bilateral relations. Facts have completely proven that win-win cooperation is the sole option for Sino-US relations.