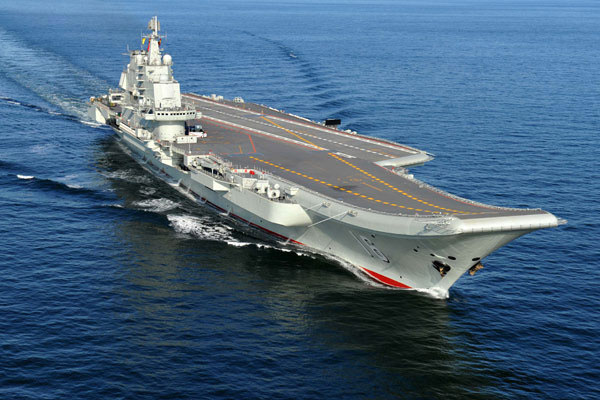 Recently China announced an 8.1% rise in military spending for its 2018 budget. This is the largest increase in several years, but it represents continuity rather than signaling any ominous portent. The balance of power in East Asia has been fairly stable since the end of the Cold War and the demise of the Soviet Union. All the regional powers, including China, are undertaking significant military modernization, but the net effect is to maintain stability and continuity. The continual media overreach for novelty and sensation has tended to exaggerate China’s potential to exert military power.

The U.S. remains, for the foreseeable future, the sole global superpower. It has several capabilities unrivaled by any other power. These include overwhelming dominance of the world’s oceans by virtue of a worldwide network of bases and allies, combined with the world’s most powerful air force and navy, including the world’s only significant carrier-based naval air force. Although a few powers, including China and Russia, have enough naval and air power to deter any surface naval force from closely approaching their coasts, the U.S. power to interdict, over the great bulk of the globe, virtually all seaborne trade by any adversary is unmatched. This profound asymmetry is one key aspect of America’s superpower status. This is so important to keep in mind because, in press accounts, each new ship class or novel weapon is often portrayed as something extraordinary, but the big picture changes little.

The crucial importance of dominating the world’s oceans is stopping the adversary’s seaborne trade from the opening day of any conflict, as Britain did to Germany and its allies in both world wars. China today is vastly more dependent on imported raw materials and machinery to support its huge industrial economy than it was over a third of a century ago when Deng Xiaoping redirected its development path toward globalism. China’s current military effort does nothing to redress this increasing economic vulnerability. Even an American-led economic embargo, let alone a full-blown war, would devastate the Chinese economy at far less serious cost to the rest of the world, since China exports very little that is unavailable elsewhere, albeit perhaps at a higher cost.

China has been expanding its military power incrementally relative to the U.S., considered in isolation, during recent decades, but those incremental gains will take many more decades to erase the enormous boost to American relative power that occurred when the Soviet Union imploded and its Warsaw Pact allies defected to NATO. During the Cold War, the vast U.S. military establishment was designed primarily to deter the Soviet superpower. After the demise of the Soviet Union and its allies, the U.S. gained considerable surplus military power. It will take several more decades, at the present rates of relative change, for China to approach the relative position of power that the Soviet Bloc once held. Until then, China is a regional power, not a superpower. Even as a regional power, its capability to impose solutions by force is checked by some other regional powers, including Russia, Japan, South Korea, Taiwan, Vietnam and India. China maintains significant military force, but realistically has no axes for projecting it without meeting very significant resistance, even without U.S. involvement.

Much is made of China creating artificial islands on several reefs and islets scattered around the South China Sea. This is of trivial consequence to the global balance of power. These tiny bases are extremely vulnerable in the event of war. Some say they could interdict trade, but this is doubtful. The trade of countries like South Korea and Japan through the Indian Ocean would be rerouted east of the Philippines, if they faced potential air or submarine attack from mainland China. What these new bases do is establish a claim to the undersea resources of fish and potentially oil. The ultimate division of these resources may be influenced, but this affects only relative economic fortunes in the region, not the military balance.

Considering China’s 2018 budget in more detail, it continues a recent trend to boost the Chinese navy more than its other services. China has not been a significant naval power since the 15th century, so its gradual development of one of the world’s largest navies is significant. Given Russia’s geography, that splits its naval forces into four isolated fleets, China has surpassed the Russian navy and is now second only to the United States. Yet it is still far behind, especially considering America’s worldwide network of bases and how many of the second-tier naval powers are its formal allies. China’s lack of seaborne air power largely limits its surface fleet to operate within range of air cover from the mainland. Therefore, despite its size, it remains primarily a regional navy.

China’s relatively large submarine fleet is getting a significant share of the new construction budget. It is the only portion of China’s forces that could potentially operate in the wider oceans in the event of war, since submarines are less vulnerable than surface vessels to air power. The newest portion of this force, nuclear and air-independent propulsion (AIP) submarines, rival the quality of the powerful Japanese and South Korean submarine fleets, but exceed each numerically. A naval and air clash with either of these could result in expensive mutual losses, but no decisive superiority by either side. Consequently, China’s naval investment has not yet endowed it with reliable unilateral coercive capability.

As the North Korean nuclear weapons program illustrates, nuclear capability may be the wild card in the East Asian security balance. A nuclear power like China obviously has potentially devastating asymmetric capability versus any non-nuclear regional power. However, it is hard to imagine a scenario where China could actually use its nuclear superiority to coerce an adversary, since the threat of using such weapons would bring with it many forms of retaliation. The mildest of these is the high likelihood of a devastating worldwide economic embargo, such as is now afflicting North Korea for merely attempting to develop nuclear weapons, let alone attacking with them. Severe nuclear threats could induce Japan, South Korea, or even Taiwan to develop nuclear weapons of their own. China would also have to calculate the possibility that using nuclear weapons against a neighbor (several of which are U.S. allies) might induce U.S. nuclear or non-nuclear retaliation, which would erode significantly China’s military capabilities. This sort of slippery slope is very likely an enormous deterrent to nuclear coercion. North Korea itself recently seems to be considering trading its nuclear weapons development for a deal with the U.S. that might include U.S. recognition, trade, and the withdrawal of U.S. military forces from the Korean peninsula.

China is continuing its gradual ascent to eventual superpower status, for what this is worth in an interdependent world restrained from war by nuclear deterrence. Yet fundamental change in the regional or global balance of power is not imminent.

Chinese MilitaryDefense BudgetTwo Sessions
printTweet
You might also like
Back to Top
CHINA US Focus 2018 China-United States Exchange Foundation. All rights reserved. Disclaimer