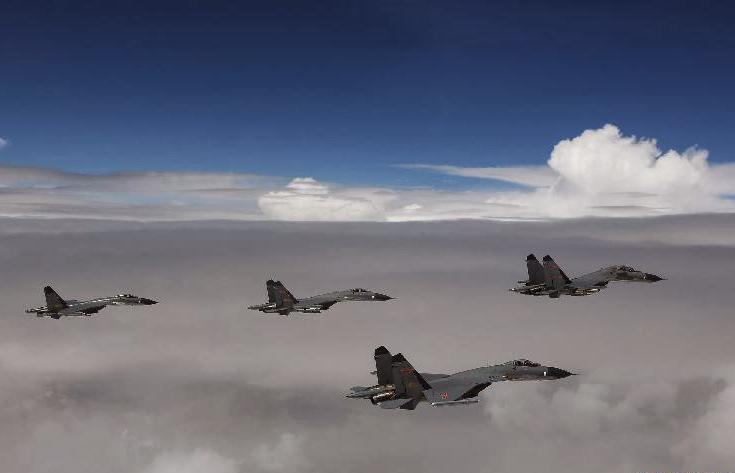 The People’s Liberation Army Air Force had an eventful year in 2017. September saw the sixth annual “Shaheen” exercises with Pakistani forces, and the Taiwanese defense ministry has reported sixteen PLAAF exercises in nearby airspace during the year ending in October. Notably, the PLAAF has expanded the range and scope of its exercises during 2017, drawing the attention of other regional actors. Chinese aerospace exercises are down from last year by some metrics, including the frequency of Japanese Air Self Defense Force scrambles, but the last few months have nevertheless been transformative.

Far and away the top Northeast Asia security story of 2017 was the standoff between North Korea and the United States. Following an unprecedented series of North Korean missile tests that led some experts to reevaluate the regime’s development milestone timeline, American bombers conducted drills along the South Korean coast in coordination with Republic of Korea and Japanese fighters for the first time. Chinese forces are on edge with so many military operations taking place near the East China Sea air defense identification zone (ADIZ), in addition to annually conducted US-ROK exercises like Foal Eagle and Ulchi-Freedom Guardian.

Exercises conducted by the PLAAF have therefore expanded to encompass a reconnaissance role to collect intelligence on the Korean Peninsula. Reconnaissance aircraft took part in operations announced early in December, which may have overflown the area where the Chinese and South Korean ADIZs overlap. As a direct response to Seoul and Washington, these exercises offer limited utility in terms of deterrence. Under current circumstances, the contrast between US-ROK-Japan exercises and PLA operations has only served to highlight a regional mismatch. The PLAAF faces two glaring presence disadvantages over the Pacific: technological limitations to operational performance and a lack of a substantive regional alliance.

On the technology front, the PLAAF has quite a bit of catching up to do. Its bomber force, which has been deployed during exercises, is primarily made up of Xian H-6K aircraft based on an outdated Soviet airframe dating to the 1950s. The United States maintains three wings of B-52H bombers, similarly long in the tooth, but based on the American mainland; long-range Pacific duties fall to the more advanced B-1B. The H-6K has been thoroughly updated to carry six sophisticated land attack cruise missiles, but payload and guidance specifications hinder its ability to project power from the Chinese mainland and threaten targets deep into the Pacific. Its estimated combat range of 3500 kilometers limits the H-6K to the CJ-20 cruise missile in attacking most targets; that means fewer targets can be selected, and precision may suffer. The practice of bomber signaling – response to new developments with aggressive airborne exercises – loses its bite with repetition. For example, answering each North Korean missile test with a B-1B flight provides no escalated response to new North Korean threats. If US-ROK flights over the Korean Peninsula are of questionable utility, the PLAAF’s reactionary maritime exercises with the H-6K demonstrate little more than a willingness to burn jet fuel in protest.

If there is a single domain in which the PLAAF needs to see improvement, it must be engine technology. Current operational aircraft almost invariably use Russian engines or Chinese derivative models with relatively poor performance. For models beyond the H-6K, that means disappointing speed and range. China’s newly-minted fifth-generation fighter, the Chengdu J-20, has been mated to a variety of engines during its development and now uses the Xian WS-15. While the WS-15 comes close to matching the performance of American engines of the 1990s, it lacks thrust vectoring for maneuverability and has been dogged by reliability issues. Great strides have been made in a short time, but a gap undoubtedly remains.

Technological hurdles are compounded by China’s operational isolation. The six years of Shaheen exercises have deepened cooperation between the PLAAF and the Pakistani Air Force, but the alliance covers primarily inland territory. Compare the PLAAF-PAF partnership to the array of American, ROK, and Japanese forces operating in the region. Entering the 2020s, those three nations’ collective airborne presence will be transformed by the introduction of the Lockheed Martin F-35 Lightning II fighter and the ROK KF-X fighter. One of the J-20’s likely strengths – knocking out slow support aircraft from long range – is stymied by the F-35’s multirole capabilities. As a C5ISR (command, control, communications, computers, combat systems, intelligence, surveillance, reconnaissance) aircraft, the F-35 is a networked platform that replaces those vulnerable support targets. A joint operation involving US, ROK, and JASDF F-35s is therefore more capable than the sum of its parts, which cannot yet be said for any PLAAF configuration.

For all the issues facing the Chinese aerospace forces in the East Asian security landscape, Xi Jinping has made their progress a special priority. At the 19th Party Congress in October, Xi mentioned both the PLAAF and the PLA Rocket Forces by name during his address, marking them as crucial to the development of a “world-class force.” One step toward the realization of that goal is the upcoming Xian H-20 stealth bomber, which would become the Chinese equivalent of the American B-2 and address concerns about the H-6K’s capabilities. While the H-20 will effectively complete the Chinese nuclear triad, the advancements made in conventional strike capabilities by the PLARF are notable in their own right. A 2016 CSIS report highlights the development and proliferation of short- and medium-range conventional weapons as crucial to China’s deterrence strategy. The PLARF was founded in 1966 as a branch of the Second Artillery Corps, to develop the deterrence capabilities of the Chinese nuclear arsenal. Its evolution from that role, to one of dual deterrence – nuclear and conventional – evinces a more diversified approach to regional security.

Xi’s vision is borne out not in the hardware, but in the personnel. The new, more exclusive Central Military Commission includes former PLAAF commander Xu Qiliang as vice chairman and former PLARF commander Wei Fenghe in the third rank. While the PLAA has maintained dominance in the Central Military Comission (CMC), the aerospace forces have risen in prominence and will likely continue to do so as their respective capabilities improve. The takeaway from 2017 is that while current exercises reveal PLAAF limitations and underscore China’s need for a regional alliance, progress has been made and will continue over the coming years.

Air SecurityChinese Military
printTweet
You might also like
Back to Top
CHINA US Focus 2018 China-United States Exchange Foundation. All rights reserved. Disclaimer