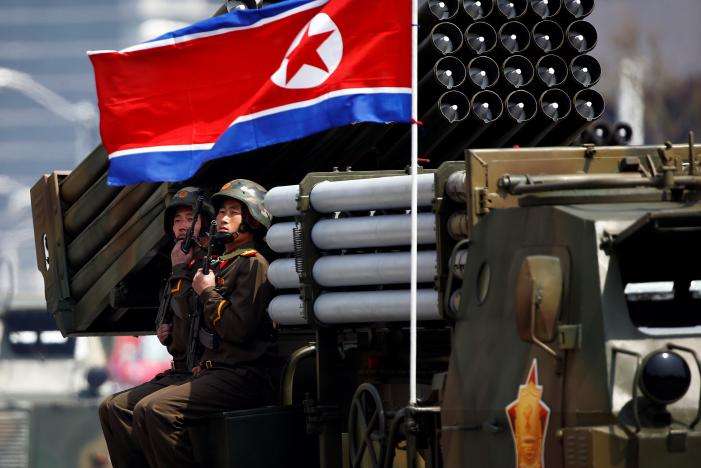 North Korean dictator Kim Jong-un says the United States will pay a “thousand-fold for all the heinous crimes” it has committed against his country. US President Donald Trump warns that North Korea will experience “fire and fury like the world has never seen.” Kim threatens to fire four missiles at the US territory of Guam. Trump promises that Kim “will truly regret it” and “regret it fast” if he follows through on that threat, or issues another.

As the unprecedented exchange of white-hot rhetoric and overt military threats between the leaders of two nuclear-armed countries continues to escalate, reasonable people around the world are asking whether there is a peaceful way out of this unfolding crisis. The answer, according to some, is to pursue a “double freeze,” in which North Korea freezes its nuclear and missile activities in exchange for the US and South Korea freezing their joint military exercises.

At first glance, this option – which was originally proposed by China, and has since been endorsed by Russia – appears to be a sensible compromise. Without the ability to test nuclear and missile technologies, North Korea would be stuck with what it already has. Rather than a potent arsenal with credible long-range capabilities, it would have an unreliable arsenal with potentially no miniaturized nuclear warheads. For the US, suspending joint military exercises with South Korea seems like a small price to pay for such an outcome, as it would do little to undercut America’s overwhelming military superiority.

But the US has flatly rejected China’s proposal, ostensibly because it seems to morally conflate North Korea’s quest for weapons of mass destruction (which it appears fully prepared to use) with America’s right to defend itself and its allies. In accepting a double freeze, the US would essentially be rewarding North Korea for ceasing activities that are already in violation of United Nations Security Council resolutions.

In addition to the dangerous precedent that it would set, the double-freeze solution has two fundamental weaknesses. First, the costs of non-compliance for such a deal would not be symmetrical. The Kim regime would incur only modest costs by restarting its nuclear program, but it may be able to impose severe and irreversible costs on the US and South Korea, should that decision lead to a full-fledged nuclear arsenal.

This is partly because of a second key weakness: the difficulties of verification. It is easy to tell whether the US is conducting military exercises with South Korea; it is much harder to ensure that North Korea is not engaging in underground research and development activities.

Indeed, most of North Korea’s R&D, not least its enrichment of fissile materials, occurs in secret facilities inaccessible to outside inspectors. Under a double-freeze arrangement, North Korea might halt only its observable activities, such as its missile and nuclear tests. Worse still, this could even work in Kim’s favor, by buying time for his scientists to master technologies – particularly nuclear-warhead miniaturization – that could then be quickly deployed once the deal is publicly broken.

Such an approach would be nothing new from North Korea. In 1994, when the US and North Korea last agreed to a freeze on North Korea’s plutonium production, Kim’s father, Kim Jong-il, quickly broke the deal, embarking on a secret uranium program. The Americans have no reason to buy the same horse twice.

Of course, the weaknesses of the double-freeze approach are probably not lost on China, either. Indeed, offering this solution was, in all likelihood, largely a tactical decision. As the Kim regime’s principal patron, China is viewed as the key to containing Kim’s nuclear ambitions. But China is reluctant to squeeze North Korea, because it fears that doing so could lead to the collapse of the Kim regime, and the loss of its strategic buffer against the US.

Against this backdrop, the double-freeze proposal was not intended to actually resolve the crisis; after all, China probably expected the US to reject it. Rather, China wanted to shift the international community’s attention away from its own potential leverage over the Kim regime, and toward the Trump administration’s erratic and worrying policy approach. By raising the double-freeze solution, China put the ball in America’s court, and placed the onus for resolving the crisis squarely on Trump’s shoulders.

If China truly does want a peaceful resolution to the escalating nuclear crisis, it should address the two key weaknesses of the double-freeze solution, proposing a detailed, intrusive, and stringent verification regime and committing itself to serve as the principal enforcer of the agreement. China should make it clear that, were North Korea to violate the deal, it would immediately lose all of the protection and support it receives. Now that would be a deterrent.