China’s announcement of a 7.8% military budget increase in 2016 surprised not only foreigners, but also Chinese. Many in China had anticipated a sharp increase even up to 20%, given the tension in the South China Sea and the assumed necessity for China to beef up further in military buildup. 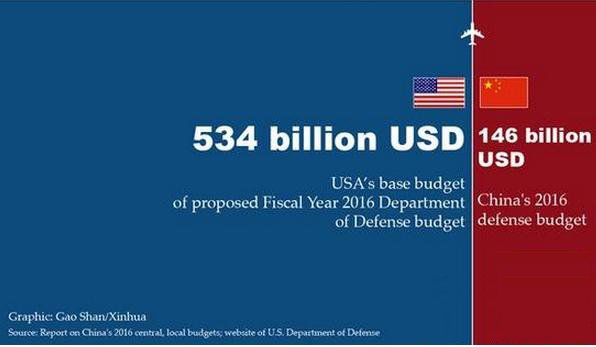 The first explanation for the lowest budget growth since 2011 is that China still adheres to its principle that military development has to go in tandem with national economic development. The 6.9% GDP growth rate of 2015 was the lowest in the last 25 years, therefore the military budget for 2016 has to be readjusted. This reminds people of what Chinese leader Deng Xiaoping said to the PLA in 1985, that“we have to bear with the situation for a few years. The real modernization of the weaponry of the military is only possible when the nation’s economy has laid a sound basis”.

Another possible reason is the budget reflects the confidence of the Chinese government in the PLA and Chinese defense industry. The gap between the PLA and its Western counterparts is closing rather than widening, thanks to sustained R&D investment over years and PLA’s strenuous catch-up efforts. The two military parades in Tiananmen Square in 2009 and 2015 demonstrate how the PLA has advanced in a short period of six years. Simply put, a stronger PLA now can afford to have a smaller defense budget.

Most importantly, the budget speaks volumes of how Beijing views the region with optimism. Defense expenditure is the best indicator of a country’s security assessment. China’s lower budget reflects her belief that in spite of the spread of terrorism, exodus of refugees, tension on the Korean Peninsula and in the South China Sea, the world is not in a state of disorder, as is asserted in the western media.

The budget also underlines China’s confidence in the Sino-American relations. “Whoever becomes American president, the overall situation of the furtherance of the Sino-American relationship will not change”, said Premier Li Keqiang recently in a press conference. Currently the US is doing salami-cutting intrusion into the Chinese islands and reefs in the name of freedom of navigation. But it will be irresponsible to conclude the US wants to challenge China even at the risk of a war. The budget reveals, almost inadvertently, that China doesn’t believe a showdown with the US is inevitable.

Optimism matters, especially in hard times. China’s peaceful rise so far is not only because of its successful management of crises, such as Taiwan ex-leader Chen Shui-bian’s call for referendum on independence in Taiwan, NATO’s bombing on Chinese embassy in Yugoslavia, and a Chinese aircraft’s collision with American aircraft above China’s EEZ, but also a result of correctly assessing the situation in the first place. Ever since China’s reform began in the late 1970s, one thing remains unchanged, i.e., optimism in spite of the vicissitudes. China maintains that peace and development are still the major trends of the times. China no longer believes, as it did before, that a world war was inevitable.

China is getting closer to center stage in the world, and how China perceives the world matters all the more. If China believes its security environment has worsened to the degree it has to greatly increase its military budget, it will set its relationship with others in a dangerous situation. However if China remains confident and doesn’t necessarily react to perceived threats with military means, it becomes a stabilizer in the region. Therefore it is critically important that China continues to believe in what it has said, that peace and development are still the major trends of the times; that its Period of Strategic Opportunity can last well beyond 2020; that the Sino-American relationship is not a relationship between two enemies.

China’s 2016 defense budget raises eyebrows. However, it would be premature to conclude that this is a turning point that the Chinese military expenditure will irreversibly come down. PLA’s J-20 fighter, Dongfeng-41 ICBM, jumbo airlifting plane and the second aircraft carrier in the pipeline, just to name a few, will not be small money spenders. The PLA’s increased operations overseas are no less a consideration. The PLA’s planned 300,000 personnel cut will also burn a lot of money. Above all, China still has to sustain a high defense budget, even without a double-digit increase, to reach its prescribed goal of modernizing the PLA by the mid-century. China can be sanguine about the future, but it has to prepare for the worst in case its optimism for the future is proven wrong.