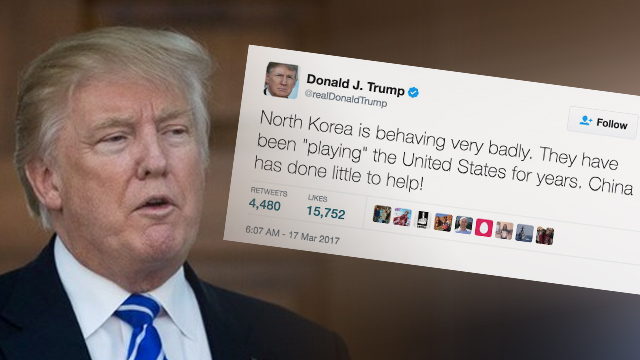 On June 27th, Secretary of State Rex Tillerson deemed China as one of the worst offenders of human trafficking and forced labor, stating, "China was downgraded to Tier 3 status in this year's report in part because it has not taken serious steps to end its own complicity in trafficking, including forced laborers from North Korea that are located in China." Tillerson’s address marked the release of the State Department’s annual report on human trafficking, which scores countries based on three tiers of compliance. The U.S. had just moved China from the “watch list” (making effort to comply with international standards, but should be watched) to “failing to comply and not making effort.”

Even for those us who believe that the U.S. should actively promote human rights, it was a confusing movement. It comes a few weeks after President Trump, true to his policy of ‘America First,’ told the world that the U.S. is “not here to lecture—we are not here to tell other people how to live, what to do, who to be, or how to worship.” In the same speech, he effectively made Saudi Arabia the U.S.’ number one partner in the Middle East, a nation that violates human rights every day of the week, and twice as much on weekends. Moreover, while the secretary of state was denouncing China—he had nothing to say about other leading violators of human rights in the same region, such as Vietnam, which the U.S. is courting. Secretary Tillerson actually commended the efforts of the Philippines, a country where the government is engaging in a large-scale, deliberate campaign of extrajudicial killing, on its achievements in curbing human trafficking.

One cannot help but wonder: if the Trump Administration had changed its mind about the promotion of human rights and decided to pay more mind to their violations, why pick on China when the U.S. badly needs its cooperation in dealing with North Korea?

Two days later, the U.S. imposed sanctions on two Chinese citizens and a Chinese shipping company for aiding the North Korean nuclear program. Such sanctions make headlines for a day and make it seem that the administration is not sitting idly by as North Korea rapidly builds up its missile and nuclear arms program. The same holds for resuming the freedom of navigation assertions around the contested islands in the South China Sea. However, these amount at best to pin pricks in a situation in which major leverage must be pulled, given the seriousness of the threat.

For a while it seemed Trump understood that the only realistic way of twisting North Korea’s arm would require the cooperation of China. However, as I pointed out here previously, to get China to absorb the risks and costs involved requires granting China wishes of similar importance. To put it differently, to ask China to pressure North Korea seriously and accept the risk that the regime may collapse, causing millions of starving North Koreans to flood China and the U.S. to move its troops north to the Chinese border, is a Big Ask. It calls for a Big Give.

Instead, the Trump Administration seems to assume that it is sufficient to tell China that it has a duty to act, or to pay some public compliment to China’s president, Xi Jinping.  Trump has called him “a terrific person,” “a very special man,” “a friend of mine,” and so on. In June, Trump even urged the crowd at a rally in Iowa, “Please don’t say anything bad about China.” It will take much more from the U.S. to sway China, such as promising to remove the anti-missile defenses from South Korea if North Korea gives up its nukes, and promising not to move U.S. troops north, among other such ‘gives.’ Instead, the impatient and impulsive Trump Administration seems ready to assume China will not cooperate and move on to dealing with North Korea some other way. However, it is far from clear that there is another way short of a very risky military confrontation.