What Is the Use of an Aircraft Carrier, for China? 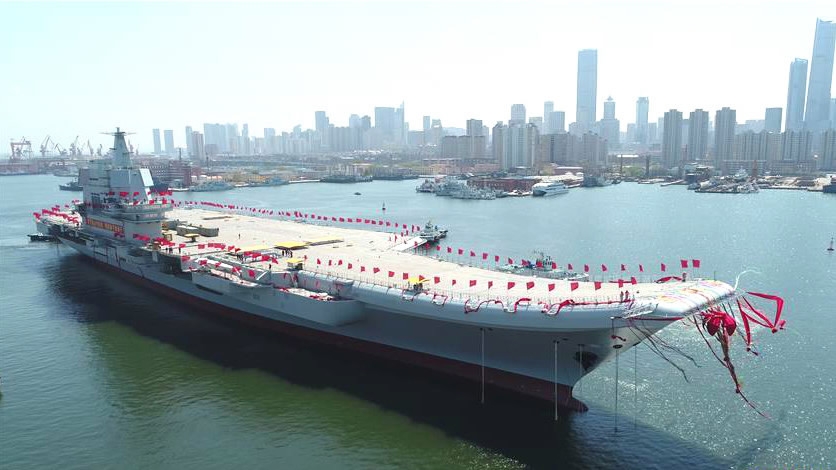 The new carrier is transferred from dry dock into the water at a launch ceremony in Dalian Shipyard of the China Shipbuilding Industry Corp. in Dalian, northeast China's Liaoning Province, April 26, 2017. /Xinhua Photo

The April 26 launching of the first aircraft carrier designed and built in China is a big relief for all Chinese people. In less than four years, the Chinese shipbuilding industry has been able to produce the most sophisticated weapons platform so far found in the nation’s military arsenal. Although the as-yet unmanned vessel looks like a copy of the Liaoning aircraft carrier, considerable improvements reportedly have been made. Most importantly, it has laid solid technological ground for China to produce upgraded aircraft carriers to come.

How useful is an aircraft carrier? For some, in today’s irregular, asymmetric warfare climate, such a large vessel seems little more than a slow-moving target for precision-guided cruise missiles. But there are others who argue the vessel is hard to find and the multiple layers of sophisticated air and sea defenses are difficult to penetrate. Whatever the case, no existing aircraft carriers in any country have ever been attacked. Moreover, the US, the strongest military power with the largest number of aircraft carriers, is still building a Gerald Ford supercarrier.

At the dawn of the 21st century, a stronger China craves such prestige as befits the nation’s status as both a global power and maritime power. Having a domestically made aircraft carrier has the same cachet as having a Beijing Olympics and Nobel prizes. But it is more than sheer pride. China cannot forget the humiliation brought by the foreign invasion that came from the sea in the last Qing dynasty. Today, the risk of China being invaded on land is next to zero, but the nation’s vulnerability is still felt at the sea.

A carrier strike group led by submarines, flanked by destroyers and frigates and armed with fighters and helicopters would remind the Chinese of the heyday of Chinese sea power, when the fleet of “treasure boats” led by Admiral Zheng He was second to none. It demonstrates in no small way the progress the PLA has made in power projection, air superiority and long-distance strike capabilities. It will bring revolutionary changes to the chain of command and control. It is a turning point for the PLA Navy, which is starting to become a truly blue-water navy.

It needs a bit imagination to think how the Chinese aircraft carriers could be used in a real combat situation. This is because China has enjoyed peace for nearly four decades. The first question raised by any American president during a crisis away from the homeland - “Where are my aircraft carriers?” - won’t be equally applicable to the Chinese leadership. China has been the beneficiary of its own peaceful rise. By all means, China can be expected to continue to exercise caution and restraint, particularly when use of the aircraft carrier in an offensive attack has to be considered. It is difficult to imagine any scenario in which China would use such lethal and devastating force to help resolve, say, its territorial disputes with some competitive ASEAN claimants in the South China Sea.

It remains to be seen how the US could still make as many “freedom of navigation” operations in China’s EEZs if Chinese aircraft carriers become operational. Over the years China’s protests against such American military activities have fallen on deaf ears. In 2013, the USS Cowpens trying to approach the Liaoning during the latter’s sea trials and was intercepted by a Chinese naval ship in a narrow escape. With a fully operational Chinese carrier strike group around, US ships or aircraft intruding into Chinese EEZs will only feel more “inconvenienced”, to say the least. Any American ships preparing to sail again into 12 nautical miles of China-controlled islands in the South China Sea would have to think twice.

For the Chinese navy, no international sea lane is more important than China’s proposed Maritime Silk Road linking the Pacific Ocean with the Indian Ocean. Over 80% of Chinese energy imports go through the Strait of Malacca. The proposed China-Pakistan Economic Corridor and China-Bangladesh-Myanmar-India Economic Corridor, two mega-projects of the Maritime Silk Road, lie on the rim of the Indian Ocean. A workforce of over a million Chinese workers can be found in the littoral states. In 2011, a Chinese frigate stood on guard near the Libyan coast when over 35,000 Chinese workers were being evacuated over two weeks. Should a situation like this occur again, a huge Chinese aircraft carrier standing by would not only create awe but also use its huge capacity to evacuate Chinese and foreigners.

Maritime trade accounts for 90% of world trade, therefore international “choke points” like the Strait of Hormuz, Strait of Bab-al-Mandeb and Strait of Malacca are critically important for China, the largest trading nation in the world. The PLA Navy harbors no ambitions to control these straits, but it doesn’t want the straits to be controlled by others, either. So far the Chinese military has one supply station in Djibouti. An aircraft carrier, like a city afloat, could tremendously reduce the problem of not having enough logistical supply bases overseas.

The most-quoted teaching from ancient Chinese strategist Sun Tzu is “to subdue the enemy without using force”. The question, now as then, is how such a desirable outcome can be achieved militarily if not diplomatically. For the Chinese navy, towering aircraft carriers with overwhelming military superiority and huge psychological effect are one of the best instruments ever found.

South China SeaASEANChinese Military
printTweet
You might also like
Back to Top
CHINA US Focus 2018 China-United States Exchange Foundation. All rights reserved. Disclaimer