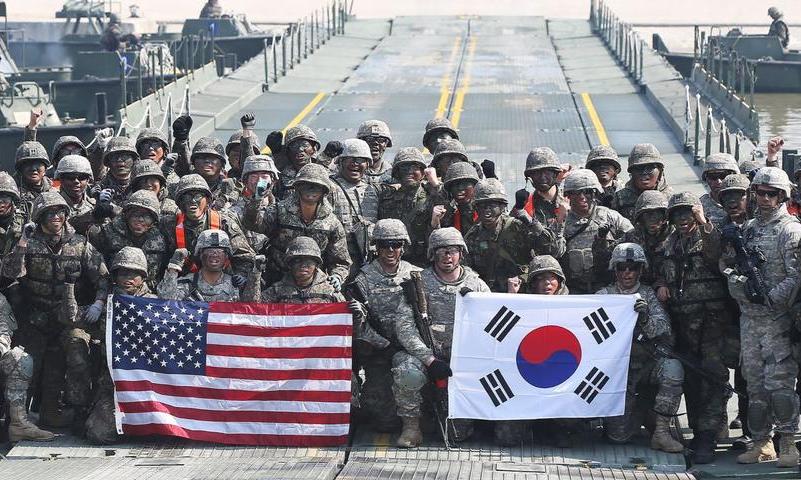 With every tweet or meeting with a foreign leader that US President Donald Trump completes, American officials find themselves struggling to reassure allies that the United States remains committed to their security. Nowhere is this truer than in Asia, where longstanding US strategic engagement, backed up by the world’s most advanced military, has maintained the balance of power for decades.

Trump’s signature Asia policy – his pledge to stop North Korea’s development of nuclear weapons – should be a clear-cut example of American military resolve. Unfortunately for the region, it has proved to be anything but that.

In early June, Defense Secretary James Mattis tried his best to convince Asian counterparts gathered in Singapore that US support was unwavering. The presence of two US aircraft carriers off the Korean Peninsula – the first time in 20 years that US naval maneuvers included two carrier groups – was meant as a “message of reassurance” against any aggression by North Korea.

But neither Mattis’s speech, nor the muscle flexing at sea, did much to bolster US credibility in South Korea, or to restrain the North’s nuclear ambitions. The problem wasn’t Mattis’s speechwriters, or the US Navy’s “show the flag” naval exercise. It was Trump himself.

From threatening military strikes on the North while all but inviting Kim Jong-un to a Mar-a-Lago tête-à-tête, to threatening to tear up trade and defense pacts with South Korea, Trump has thoroughly confused America’s Asian allies. The effects of his contradictory statements will come home to roost later this month, when South Korean President Moon Jae-in visits Washington, DC. Moon is crafting his own approach to dealing with Kim, while Trump’s behavior could hardly be undermining US influence more.

Moon’s desire to take a different tack with the North should come as no surprise. A long-time advocate of a softer line, he acknowledges the North Korean threat, but believes that the South has time to seek a solution by reviving economic ties and dialogue. The strategy harks back to the South Korea’s decade-old “Sunshine Policy,” former president Roh Moo-hyun’s unsuccessful outreach to the North, which Moon supported. Today, Moon is entertaining a range of similar “soft” options – such as reducing military tensions, increasing people-to-people contacts, and offering more humanitarian aid – to help shift course gradually.

More fundamentally, Moon believes that the US has steered the alliance’s North Korea strategy off course. He wants South Korea to be in the driver’s seat, with his government as mediator between the US and North Korea. Moon laid down his marker on June 7, when he announced a freeze on deployment of the Terminal High Altitude Area Defense (THAAD) US anti-missile system in South Korea, because of his questions about allied decision-making. The freeze, which includes an “environmental review,” is a none-too-veiled signal to expect more assertiveness on national security and North Korea policy.

Moon is well positioned to capitalize on Trump’s self-inflicted wounds – which have included threats of unilateral military action, protectionist mantras, and the abandonment of the Trans-Pacific Partnership trade agreement. Moon, who was elected to boost jobs and curb corruption, campaigned on sweeping away his predecessor’s policies, including her hardline approach toward North Korea. Even if sparks fly in Washington later this month, Moon is unlikely to pay a political price at home. South Koreans broadly support a strong relationship with the US. But they also follow American politics closely, and these days, many regard the dangers of erratic leadership as no longer being confined to Kim’s regime.

Indeed, Trump’s statements about the US-South Korean relationship have ranged from the impolitic to the bizarre – such as accusing the South of unfair trade deals and then threatening to send South Korean leaders a bill for the THAAD system. He has also issued unnerving military pronouncements, like an April prediction of a possible “major, major conflict” on the peninsula. Those comments, made during an interview with Reuters, seemed to overlook the deployment of 700,000 North Korean soldiers just above the demilitarized zone, which would make any war with the North devastating to the South.

Trump’s approach to the nuclear crisis on the Korean Peninsula has produced equally troubling knock-on effects. China, South Korea’s leading trade partner, is a case in point. With South Korea’s economy struggling to sustain growth, China is leveraging its position by registering its opposition to THAAD. Calling the system a threat, the Chinese have been boycotting South Korean goods, stalling investment, and curbing what had been a booming tourist trade.

How hard Moon presses Trump for a different approach to North Korea remains to be seen, but one thing is certain: Trump’s standing among South Koreans won’t be what keeps Moon mum. According to the Asan Institute for Policy Studies, a Seoul-based think tank, Koreans gave Trump exceptionally low approval ratings during his 2016 presidential campaign, and his popularity remains at rock-bottom levels. Even with China’s recent THAAD-related arm-twisting, Chinese President Xi Jinping rates more favorably among South Koreans than Trump.

Moon will have many questions for Trump about US leadership in Asia – questions that Mattis was unable to answer. Given the risks posed by an unpredictable US president, South Koreans’ unease is easy to understand. Before Trump, 11 US presidents helped maintain stability on the Korean Peninsula by building alliances, using diplomacy, calibrating their rhetoric, and deploying American military strength. Since the end of the Korean War, no president has even casually, much less flippantly, called the US role on the peninsula into question. None, that is, until now.

Korean PeninsulaTHAADChina-US-North Korea Relations
printTweet
You might also like
Back to Top
CHINA US Focus 2018 China-United States Exchange Foundation. All rights reserved. Disclaimer