Unwinding the China-India Standoff in the Sikkim Himalayas 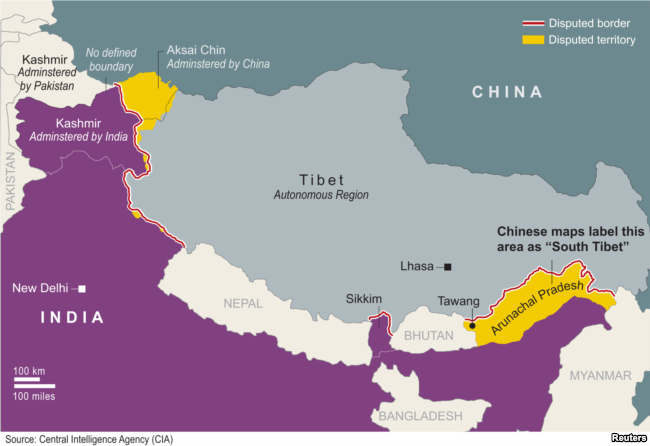 China and India are locked yet again in a standoff of Himalayan proportions. Almost five weeks after Indian troops trespassed and forcibly halted the activities of a Chinese road construction crew on a narrow plateau at the China-Bhutan-India trijunction area in the Sikkim Himalayas, the two sides appear no closer to resolving their quarrel. The area in question, Doklam, is the subject of a legal dispute between China and Bhutan, is under the effective jurisdiction of China, and holds an important security interest to India.

The restoration of the status quo ante in the Doklam area will be a protracted affair.

Unlike previous impasses on their disputed Himalayan frontier earlier this decade, which coincided with a warming phase in ties and were wound down with the exhibition of good sense on both sides, bilateral ties have hit a sour patch. China, as the aggrieved party, bears little interest in unwinding the standoff on terms other than its own. Worse, there is no agreed definition among the parties of the object of discord at stake – to the point that China does not even view India as the appropriate interlocutor to engage with to unwind the standoff.

China’s position on, and solution to, the standoff is blunt and straight-forward.

The alignment of the China-India boundary in the Sikkim Himalayas sector is mutually defined as per Article 1 (“the line commences at Mount Gipmochi on the Bhutan frontier, and follows the … water-parting”) of the Anglo-Chinese Convention of 1890 relating to Sikkim and Tibet. On numerous occasions, Indian representatives from Prime Minister Jawaharlal Nehru down have formally accepted this. By interfering in a Chinese road construction project roughly 3 km to the north of the plain letter of Article 1, India has violated China’s territorial sovereignty. As a precondition for any dialogue, India must vacate its trespass unconditionally. To the extent that the area in question is the subject of a dispute due to Bhutan’s belated claim to the area in the 14th round of Sino-Bhutanese boundary talks, this is a wholly a matter to be resolved between Beijing and Thimpu. Until such time, Bhutan – let alone India which has no locus standi to intervene – must respect China’s effective jurisdiction over the Doklam area.

For its part, India does not deny the validity of Article 1 of the Anglo-Chinese Convention of 1890. Its alignment on the ground, in its view, is not an established fact however. As per the same article, the “boundary of Sikkim and Tibet [was to] be the crest of the mountain-range separating the waters flowing” southwards and northwards. The “line [that] commences at Mount Gimpochi on the Bhutan frontier” does not correspond with this principle and should in fact be marked on the ground 6 km to the north – making the area of trespass wholly Bhutanese soil. By way of its bilateral Friendship Treaty of 2007 with Bhutan which calls upon both sides to “cooperate closely … on issues relating to their national interests,” India enjoys a basis to intervene in the dispute on Thimpu’s behalf. China’s road construction activity in this area constitutes a “significant change of the status quo.” Its disturbs India’s security interests as well as violates an ‘understanding’ arrived at by Indian and Chinese boundary negotiators in 2012 that the final alignment of the boundary in the trijunction area (which New Delhi has apparently sought since 1985) would be settled in consultations that involved India. China must therefore desist from further road-building in this area and India stands ready to mutually ease the standoff on this basis.

India’s troop intervention in Doklam is not without grave political risk.

While the security logic of its actions holds merit and the provision in its Friendship Treaty with Bhutan affords a veneer of respectability, New Delhi’s diplomatic communication throughout this episode has been couched in the imprecise political language of status quos and understandings. By contrast, China’s communication has been crisply grounded in the black-and-white language of legal sovereignty.

India’s troop intervention in Doklam is also at risk of setting a slew of consequential precedents.

For the first time ever, India is militarily engaging a state actor – and one no less than China – from the soil of a third country. For a status quo-ist power, as it sees itself, this is a leap into the unknown. Second, it is militarily intervening on behalf of a friendly partner country to uphold the latter’s claims of sovereignty to a patch of territory which it does not effectively control. Not even the mighty U.S. military extends defense obligations to disputed territories that its allies do not exercise effective control over – let alone intervene on their behalf. Third, the China-India-Bhutan is not the only unresolved trijunction along the length of India’s extended northern frontier. Payback in the same coin could be highly unpalatable.

The trespass also calls into question the political lessons learnt by India from its 1962 debacle with China. The proximate trigger that autumn was New Delhi’s placement of a lightly-armed military post in advance of its map-based claim line. Then, as now, New Delhi assumed that its troops were unilaterally entitled to plug the breach that had opened up as a result of a discrepancy between its map-based - and in this instance Convention-based – line and the (watershed) principle that was to guide the line’s demarcation on the ground.

Having engaged in a high-risk venture, the onus resides on India’s shoulder to devise the conditions of its exit. The longer the standoff persists, the stronger will be the impression that it is New Delhi which is engineering a lasting change in the status quo on the ground – with attendant threat of political reprisals by Beijing.

New Delhi must first contend with the tangled legalities of the situation. It does not possess legal standing to directly engage China to ease the standoff in Doklam. That standing is held by Bhutan. Efforts to preempt this dilemma via emollient talk will only add to the question of New Delhi’s original motivations and purposes. New Delhi must push Thimpu to take the lead in engaging Beijing and devise a mutually acceptable boundary protocol that acknowledges China’s effective jurisdiction of the area, pending final settlement, in exchange of the restoration of the status quo ante as of June 16, 2017. In parallel, New Delhi must commit to unilaterally vacating its trespass in the Doklam area while privately holding out for Beijing reiteration of the 2012 understanding that the tri-junction boundary points will be finalized in consultation with all (three) parties concerned.

More broadly, the Modi government must reflect on the political drivers that have incited China to construct a road of marginal military value against a charged political backdrop. Hard as it might appear on surface to comprehend, the standoff is only secondarily about territory; principally, it is about the politics of the bilateral relationship. Territorial issues have never been treated by Beijing as a matter of mere cartographic detail; rather they are tied to a larger political calculus of stability and good neighborliness. Equally, China’s rulers have not been reticent to lever a more hardline approach on territorial issues, including the creation of facts on the ground, to signal displeasure. In this vein, the Doklam episode is fundamentally about the use of the long-festering boundary dispute by Beijing as a continuation of adversarial politics by other means. That continuation however is in response to the marked deterioration in ties precipitated by the mis-management of the bilateral relationship by hardline elements within the Modi government.

It was never a wise decision to elevate two issues beyond the direct purview of China-India relations, and which touch upon India-Pakistan relations, (China’s support for India’s Nuclear Suppliers Group membership; listing a Pakistan-based terrorist on the UNs terrorism list) to the forefront of ties as core Indian interests and effectively litmus-test China to accede to them. Nor was it a wise decision to plaster pro-Dalai Lama graffiti on the edifice of Sino-Indian relations in response to Beijing’s recalcitrance on these two issues. Having countenanced the hosting of the Dalai Lama by the India’s president at his official address, the go-ahead to the U.S. envoy to host the head of the Tibetan government-in-exile at his residence, the first-ever visit by a U.S. envoy to the disputed territory of Tawang, as well as a host of other assorted Tibet-related slights over the past nine months, Beijing decided that it had had enough and resolved to instill a dose of boundary realities once again to the forefront of the bilateral relationship. Hence Doklam – and at a time and place of its choosing where Beijing is technically in violation of nothing but has yet been able to make its point loud and clear.

Going forward, the Modi government must restore a modicum of discipline in its Tibet-related interactions that impinge on China-India relations. And if boundary management is to be restored to the even keel that he had inherited from his predecessor, Mr. Modi must treat the China relationship with the depth, wisdom and seriousness that a new type of model relationship between two major countries commands.