The Navy Times reported on April 8, 2016 that Pacific Command (PACOM) Commander, Admiral Harry Harris, wanted to take a more confrontational, muscular approach with China in the South China Sea but was being prevented from doing so by the White House. Further, the article stated that National Security Advisor Susan Rice has imposed a “gag order” on military leadership on the subject. 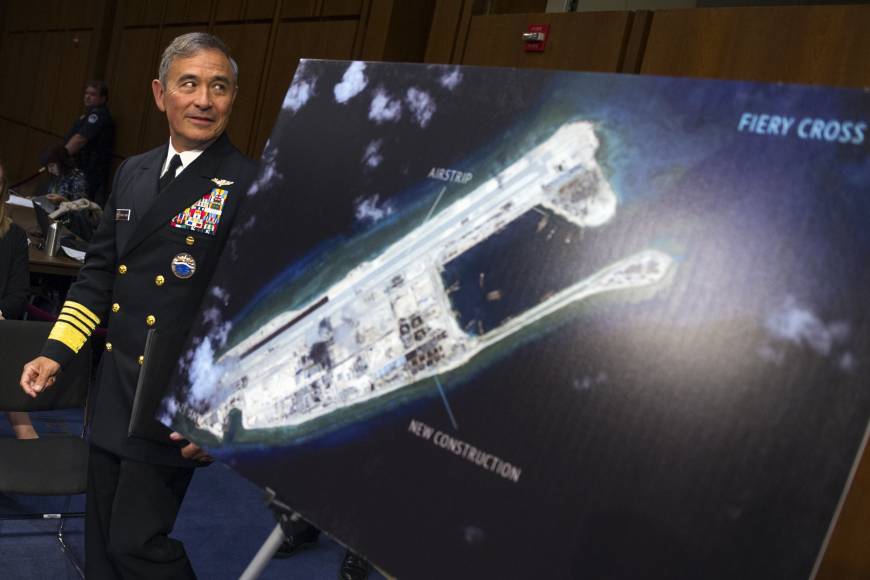 Adm. Harry B. Harris, Jr., U.S. Navy Commander, U.S. Pacific Command, walks past a photograph showing an island that China is building on the Fiery Cross Reef in the South China Sea ahead of testimony before a Senate panel in Washington on Sept. 17. (AP)

National Security Adviser Susan Rice imposed a gag order on military leaders over the disputed South China Sea in the weeks running up to the last week’s high-level nuclear summit, according to two defense officials who asked for anonymity to discuss policy deliberations. China’s president, Xi Jinping, attended the summit held in Washington, and met privately with President Obama.

The order was part of the notes from a March 18 National Security Council meeting and included a request from Rice to avoid public comments on China’s recent actions in the South China Sea, said a defense official familiar with the meeting readout.[1]

Both the White House and senior military leaders, including Admiral Harris and Chairman of the Joint Chiefs of Staff General William Dunford, later denied that there was any gag order.

The characterization of what was very likely a caution to the military by National Security Advisor Susan Rice not to make potentially inflammatory statements or statements that could be interpreted as contrary to White House policy regarding China just prior to a meeting between President Obama and Chinese leadership as a gag order was unfortunate. It was a caution well within her rights and responsibility. Admiral Harris seemed to see it that way as well.

Harris issued a statement saying that he was confident the President considers his counsel on East Asian matters. However, he declined to discuss what policy recommendations he had offered, saying his private counsel to the President during classified briefings “wouldn’t be worth much if it weren’t private.”[2] The relationship as described by Harris is the basis for civil-military relations in the United States. Some military leaders before him have not understood it as well.

The military and their civilian masters often disagree. Ultimately, however, civilians get to make policy, ideally after having privately received candid and comprehensive input and advice from the military. The military’s job then becomes to execute the policy. Understanding those job descriptions and keeping disagreements private are key components of civil-military relations. General MacArthur Douglas failed to hide his disagreement – contempt – for Truman administration policies in Korea. He went so far as to send a letter expressing that disagreement to Congress. Truman fired him, with the unanimous support of the Joint Chiefs of Staff.[3]

Defense Secretary Dick Cheney dismissed Air Force Chief of Staff General Michael Dugan in 1990 after Dugan talked to reporters about possible U.S. military targets in the Gulf War, including Saddam Hussein and his family. In defense of his action, Cheney told reporters that General Dugan was ”not even in the chain of command” of the Persian Gulf operation and so “to speculate about what may or may not be included in a plan that might or might not be implemented is inappropriate.” Further, General Dugan’s statements about targeting Saddam Hussein and his family were considered a potential violation of the standing Presidential executive order prohibiting the assassination of foreign leaders.[4]

In 2008, Esquire magazine published an article on CENTCOM commander Admiral William Fallon. Fallon, it stated in the article by Tom Barnett, was the only thing standing between the U.S. and a war with Iran, a war apparently favored by the George W. Bush administration. It quoted Fallon’s earlier comments made to Al Jazeera. “This constant drumbeat of conflict…is not helpful and not useful. I expect that there will be no war, and that is what we ought to be working for. We ought to try to do our utmost to create different conditions.”[5] Fallon rejected the praise the article brought him from a war-weary public, calling the article “poison pen stuff.”[6] Nevertheless, Washington was not pleased. Fallon retired soon thereafter amid speculation it was a forced retirement.

President Obama fired Afghanistan war commander General Stanley McChrystal in 2010 after McChrystal and his staff criticized the Obama administration to reporters from Rolling Stone magazine, personally and regarding policy in Afghanistan. McChrystal had been in hot water the year prior for supposedly leaking a copy of his recommendations to the press – recommendations basically saying “more forces or mission failure” – and perceived by the White House as putting pressure on the President to accept those recommendations. [7] The incident was seen as reminiscent of the MacArthur firing. “It has been nearly 60 years since President Harry S. Truman fired Gen. Douglas MacArthur in the midst of the Korean War, the last time a president directly stepped in to remove the senior commander in a war zone for disrespect toward the White House. For Mr. Obama, this was a MacArthur moment, a reassertion of civilian control.”[8]

These incidents are different than those where top military brass just makes stupid comments, and pay for it with their jobs. In 1995, Admiral Richard Macke, then the head of Pacific Command, resigned after what amounted to an expression of no-confidence from Defense Secretary William Perry. Macke had told reporters that sailors and Marines who beat and raped a 12-year-old Japanese girl should have hired a prostitute instead of paying for the car they rented and used in the crime.

The incident between Admiral Harris and the Obama Administration, if there was one, centered on policy. The Obama Administration has made it clear that it intends to pursue a policy of “don’t do stupid shit”[9] in its final months, and to focus its efforts on goals that can be achieved. Effectively engaging China at the Nuclear Security Summit was seen as much productive than confronting China with U.S. military might. Instead, the United States is pursuing other approaches to countering Chinese aggression in the South China Sea, including ramping up a new military alliance with the Philippines. Under a new agreement, the U.S. will be allowed build facilities at five Philippine military bases. Consequently, more American troops, planes and ships will be spread across the country than have been there in over twenty-five years.[10]

The Obama Administration, even though having less than a year left in office, sees a menu of important items on the table between China and the United States. The South China Sea is clearly one of those items, but so to are nuclear safety, North Korea, cyber security, human rights, missile defense plans for South Korea, a bilateral investment treaty and more. In September 2015 President Obama and Chinese President Xi Jinping issued a historic joint statement on climate change. Unquestionably, managing cooperation and competition present future challenges for both China and the United States. President Obama wants to make sure that the United States speaks with one voice in addressing challenges. Undoubtedly the next administration will as well.

Offering counsel and then potentially having to implement policy that goes against that counsel is difficult, but a fundamental premise of civil-military relations. There are no good alternatives to that system. Military officers who speak out against unpopular governmental policies are sometimes praised and called courageous. But that practice is also sometimes the basis for military coups. Top military officers who wait until they retire to speak out against policies, as in the so-called Revolt of the Generals in 2006[11] regarding policy in Iraq, are sometimes criticized for not speaking up sooner.

Civil-military relations are difficult. It is a tribute to the United States, however, that it works so hard to get it right.