Is the Western Pacific Heading Towards an Amphibious Arms Race? 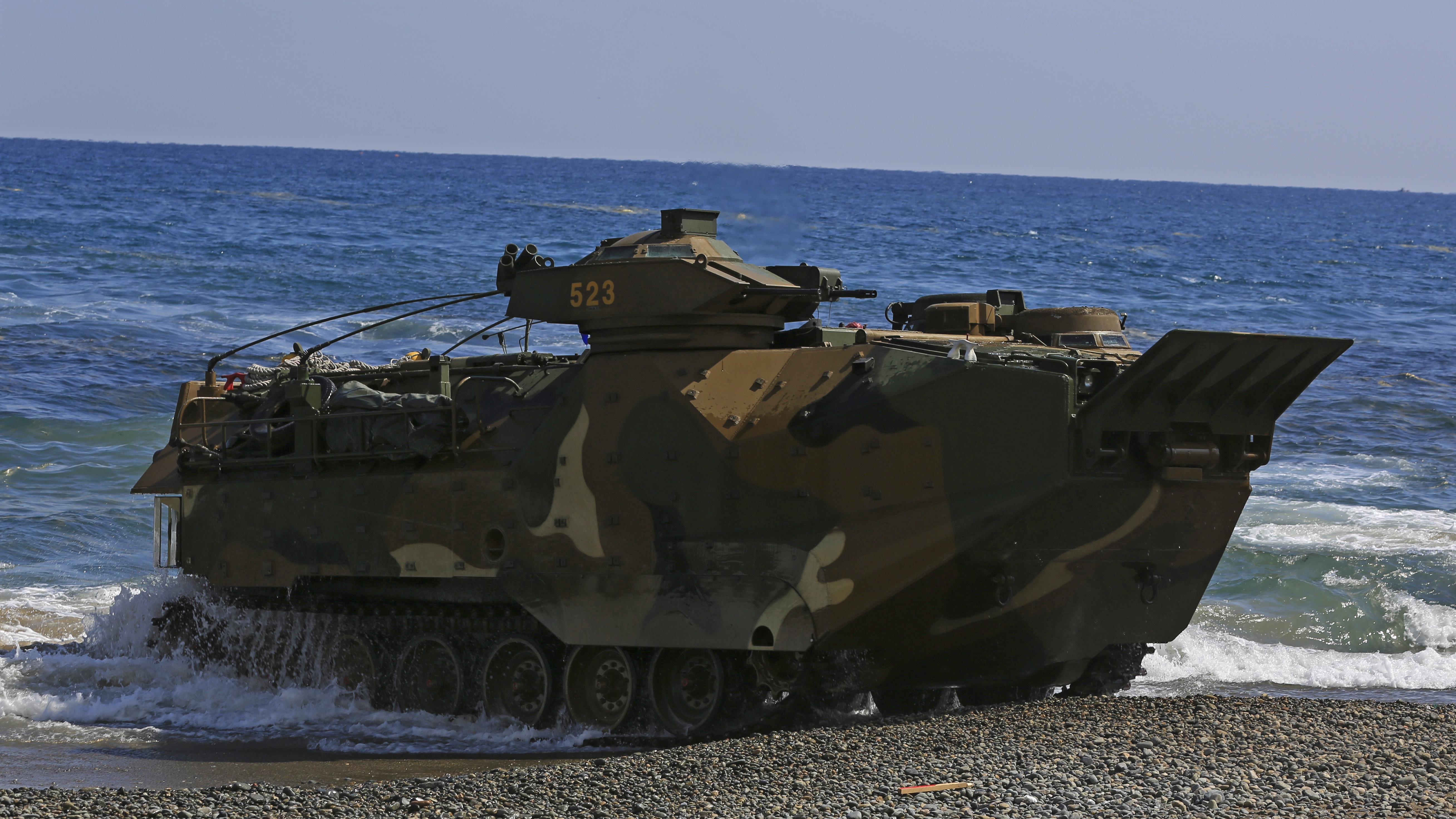 Amphibious military capabilities, the ability to deliver ground and air forces from the sea to the shore (think the D-Day invasion of World War II), are surging in the Western Pacific. The military balance between China and the United States (and its Pacific allies) usually focuses on advanced systems – missiles, aircraft, ships, submarines – that could be used to either build a protective Anti-access/Area Denial “bubble” or pierce one. But both countries have steadily expanded their marine forces and the amphibious capabilities that accompany them, signaling that each believe a potential conflict in the region might turn on the ability to hold or take strategic archipelagoes like Japan’s southwestern islands, or the contested features in the South China Sea.

Last month, the People’s Daily promoted a massive exercise of thousands of PLA Navy Marines moving and maneuvering across thousands of kilometers and practicing air, ground, and beach assaults. Other reports said the exercise involved over 10,000 marines, nearly the entire PLA Navy Marine force. Demonstrations and preparations like this worry the United States and others in the region who see China’s buildups in the South China Sea as threatening to their own territory or claims.

Many analysts charge that China is militarizing its South China Sea outposts, in violation of intent communicated by President Xi Jinping at a joint press conference at the White House with President Barack Obama in 2015. Whether or not China has militarized the Spratly Islands depends on the ambiguity in how “militarization” is defined. U.S. intelligence noted in 2016 that while the islands had the capacity to host substantial military and force-projection capabilities, only relatively short-range defensive systems had been deployed so far. And earlier this year in an interview with Time magazine, the new commander of the Japan-based U.S. Seventh Fleet, Vice Admiral Phillip Sawyer, noted concern over China’s activity in the South China Sea but avoided asserting that it violated President Xi’s 2015 statement on non-militarization.

Admiral Wu Shengli, the former chief of the PLA Navy, told his U.S. counterpart in 2016 that China’s build-ups in the South China Sea were defensive, and therefore should not be considered “militarization,” and that future build-ups depended on the threats the outposts faced. He emphasized that the PLA Navy “is determined and capable to defend sovereignty and security of islands and reefs in the South China Sea.”

The Trump administration’s new National Security Strategy views China’s activity in the South China Sea as a potential threat, saying that its efforts “to build and militarize outposts in the South China Sea endanger the free flow of trade, threaten the sovereignty of other nations, and undermine regional stability.”

But the strategy also announces a shift in U.S. strategy vis-à-vis other great powers, emphasizing “the ability to deter potential enemies by denial, convincing them that they cannot accomplish objectives through the use of force or other forms of aggression.” In support of that denial strategy, it goes on to prioritize assisting and enabling the United States’ allies and partners to do the same by modernizing and expanding their forces, acquiring new military capabilities, and affirming their political will in the face of a potential conflict.

One way to deny what the strategy views as China’s potential military objectives is to leverage traditional amphibious capabilities to raise the costs of an offensive operation against the archipelagos ringing the Western Pacific, and to fortify them such that Chinese forces could not simply bypass them either.

A 2015 essay in Foreign Affairs on “How to Deter China” by the head of an influential U.S. think tank emphasized the idea of denying China the use of air- and sea-space by leveraging the Western Pacific’s archipelagic geography, and may have marked an inflection point in the United States’ strategic thinking.

Last fall, strategists in the U.S. Navy and Marine Corps released a new warfighting concept called Littoral Operations in Contested Environments. Beyond simply seizing islands from an adversary, the concept would see U.S. Marines using their own missile and artillery systems to sink adversary ships and control the local airspace.

At the same time, the ally that appears to be making the most strides towards enabling the denial strategy called for in the U.S. National Security Strategy is Japan. Japan’s Ground Self Defense Force recently commissioned a rapidly-deployable amphibious brigade, the country’s first marine unit since World War II. Forming the amphibious unit has been controversial in Japan. The Japanese government asserts it needs the marine capability to better defend its southwestern islands, which it considers vulnerable to China’s growing amphibious capabilities. The government’s concern is so acute that it is considering changing its official ocean policy from being economic and resource-focused, to prioritizing coastal security and defending its remote islands, The Japan Times reports.

Less information is available on China’s amphibious advances. However, in its 2017 report on China’s military developments, the U.S. Department of Defense stated that it believes that China’s investments in new, more capable amphibious ships “signal its intent to develop expeditionary amphibious assault, HA/DR, and counterpiracy capabilities.” The “expeditionary amphibious assault” capability is what worries the United States and partners like Japan, as well as investments in smaller ships to support logistics operations in the South China Sea.

The PLA Navy has at least 32 large amphibious ships in its eastern and southern theaters, an additional 15 smaller ones, and its amphibious fleet continues to grow. China launched its sixth large Type 071 amphibious ship this past January. Numerically, that’s roughly the same size as the United States’ amphibious fleet, though its ships are more geographically dispersed, and the U.S. Navy ultimately wants a fleet of 38 amphibious ships.

Distinct from China’s amphibious fleet, however, ten of the United States’ amphibious ships are large-decked helicopter carriers that are nearly as big as China’s Liaoning aircraft carrier. With the introduction of the short-takeoff F-35 variant now deployed operationally for the first time on the USS Wasp in the Western Pacific, the United States’ amphibious force now includes an organic, fifth-generation fighter. There have also been reports that Japan’s large helicopter destroyers could be modified to accommodate the F-35 as well, effectively turning them into true aircraft carriers, a worrying possibility for China, and one it has warned Japan not to pursue.

Because of their “ski jump” flight decks, not even the Liaoning or the Type 001A aircraft carrier launched last year can accommodate China’s own fifth-generation fighters, the J-20 and J-31. The DoD’s report believes China is interested in constructing “large deck” amphibious ships of its own, but for now, such ships remain a unique strike and close-support capability of the United States’ amphibious force.

If there is consolation in these buildups, it is that both the United States and China predicate them on the perception that the other may seek to upend the regional status quo. The United States looks at the extensive military capabilities latent in China’s South China Sea bases and is hard pressed to believe they are merely defensive, as Chinese officials repeatedly assert. China looks at strategies and plans proposed by prominent think tanks on behalf of the U.S. government that illustrate plans for operations against those bases, and considers these strategies a justification for their own preparations. But while each may view an amphibious arms race with concern, if the result is that offensive amphibious operations become mutually prohibitively costly, then it at least suggests a stable, if uneasy, status quo.

South China SeaUS-China Rivalry
printTweet
You might also like
Back to Top
CHINA US Focus 2018 China-United States Exchange Foundation. All rights reserved. Disclaimer