Donald Trump’s Surge and What It Tells Us

It is still in the early stages of the U.S. presidential primary, but the real estate tycoon, famous talk-show host and billionaire Donald Trump’s surge has already occupied the headlines of major newspapers and Web portals. What does that tell us about the U.S. politics and society? 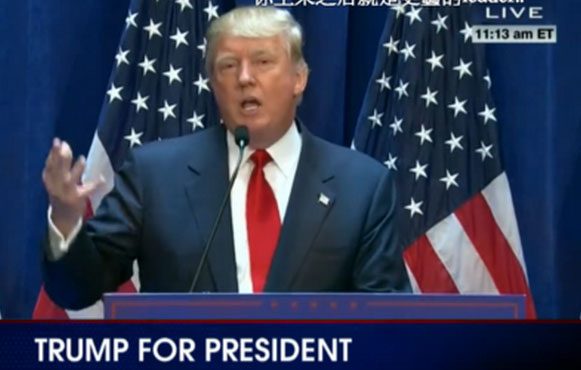 There were non-traditional candidates in the past elections, but this year both the number and their staying power is extraordinary. According to historians, 22 candidates in one presidential election is quite rare, but there is still potential to set a historical record, as Vice President Joe Biden is considering to whether weigh in. Among the candidates, besides businessman Trump, the former HP CEO Carly Fiorina and the neurosurgeon Ben Carson are both non-politician candidates, joining the contest as protest candidates.

What is against the conventional wisdom of campaign politics is that the momentum driving such candidates has long exceeded the usual length of period it used to be. For example, Trump has been on the top of the Republican candidates’ poll for at least 60 days, and Carson is also on the rise. The traditional, “serious” candidates like Jeb Bush, Scott Walker and Chris Christie were left far behind.

The second unusual aspect of Trump’s surge is that after he touched several taboos of U.S. politics, his approval rating even rose higher. He first attacked the Hispanic illegal immigrants as drug-dealers, criminals and rapists, which annoyed large groups of Latino voters. Then he attacked famous Vietnam War veteran John McCain by saying he is not a hero at all. His most fierce attack was against the female Fox News host Megyn Kelly, which was seen largely as an attack against women. However, each time he survived as a non-politician, and the public seemed to tolerate him for his straightforward style.

Trump’s surge is unusual but perhaps predictable in a transformational period of American politics and society. It appeals to at least three social sentiments of the public and therefore could last for a longer period of time.

The first sentiment is anti-establishment politically. It is obvious that the Americans are disappointed with President Obama’s tenure in the past six years. He did not bring the changes he promised. The polarization of American politics continued as before and there was even a government shutdown on his watch. Economic equality got worse, and people expressed their discontent through the Occupy the Wall Street movement. Ethnic disputes were rising too, with riots that happened in Ferguson and Baltimore. Especially within the Republican Party, the constituents are not satisfied with the party leaders. The Republicans are in incredibly strong shape as the party enjoys advantages in the state legislative, gubernatorial and congressional seats. However, it has never carried through on its commitments after the elections, and it is Democrats who is actually making reforms. Therefore, the Republican constituents do not trust their leaders to serve their interests any more.

Secondly, the sentiment of anti-globalization. The U.S. used to be a facilitator and beneficiary of globalization, but in the new millennium, especially after the financial crisis, American economic nationalism is becoming more and more prominent. The world has witnessed more and more U.S. antitrust and antidumping action against its trading partners, and the Obama administration even has a policy of promoting buying American goods and services. When President Obama tried to obtain Trade Promotion Authority from the Congress, he was pushed back by an odd coalition made up of left-wing Democrats and right-wing Republicans, as both groups represent the losers in globalization, the unions and farmers. When Trump said we lose to China in trade, or we don’t beat China on trade, he is appealing to such anti-globalization sentiment some Americans hold.

Thirdly, the sentiment of exclusion, which is related to the anti-globalization sentiment. Some Americans blame globalization for high unemployment rate in the U.S. They say that because too many illegal immigrants flooded across the border, they lost their jobs. They also blame globalization for causing U.S. companies to outsource jobs overseas. That’s why many candidates including Trump propose to raise tariffs against countries like China or Japan. Trump’s attack on illegal immigrants is ridiculous to some extent. However, some constituents from deep “red” states may actually agree with him, when he said easy border crossing brings criminals to the United States. Trump’s call to end birthright citizenship, which has roiled the Republican presidential primary, also reflected the sentiment of exclusionism.

According to the latest poll by CNN, nationally Trump is on the top with a 32% approval rating from Republican voters, followed by Dr. Carson (19%), Governor Jeb Bush (9%) and Senator Ted Cruz (7%). This is significant as there is only four months left before the Iowa state‘s national first caucus. That’s why, some analysts warned, Trump could be the Republican presidential nominee if the recent trend endures. Trump’s surge may end one day, but the social sentiments it reflects need to be addressed by the incoming U.S. president.