What Are We Saying When We Talk About Hong Kong? 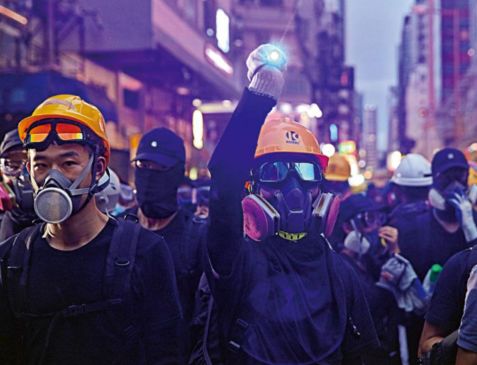 Houston Rockets general manager Daryl Morey is in trouble. His Twitter post regarding Hong Kong—though deleted quickly and though he later stated his remarks only represented his own and not the Rockets nor NBA—have ignited dissatisfaction and fury among many Chinese. Various opinions have also been voiced in the United States, some supported Morey, some apologized to the Chinese on Morey's behalf, while others argued the NBA shouldn’t get involved in politics. The matter has been portrayed as a typical case of the "butterfly effect"—a Hong Kong resident killed his girlfriend in Taiwan, resulting in the Chinese mainland boycotting the NBA. How did we come to this? Let's get back to Morey's account of what is happening in Hong Kong and take a closer look.

To Morey, the slogan he posted, "Fight for freedom, stand with Hong Kong,” looks exciting, yet doesn’t withstand scrutiny. In fact, not only Morey, but many who have been attracted by such a slogan know little about what is going on in Hong Kong. The matter is not, as the mainstream American media reported, "peaceful" protestors confronting Hong Kong police who "abusively use violence," nor protestors safeguarding human rights and the rule of law in Hong Kong. It is not a sentimental tale of "between a high, solid wall and an egg that breaks against it, I'll always stand on the side of the egg." Rather, it is political upheaval that the pan-democracy, or opposition, forces in Hong Kong have instigated, taking advantage of the Special Administrative Region (SAR) government's revision of the Fugitive Offenders Ordinance and Mutual Legal Assistance in Criminal Matters Ordinance, which is targeted at the serial elections scheduled for the end of the year. That includes district-level elections in November, next year's elections for the Legislative Council, elections for the committee for the election of the chief executive in 2021, and even the election of the chief executive in 2022.

If the opposition truly values human rights, they should in the first place safeguard the right to life of the young Hong Kong woman who was killed in Taiwan. Of course, the SAR government's approach to the revision was less than appropriate in some aspects, and failed to explain it properly, for which it has apologized, and promised to listen more carefully to the local residents in the future. However, those in the opposition camp have not returned to reason after the SAR government apologized and withdrew the revision; they have persisted instead. In the four months since June, protests have taken place nearly every weekend, and without exception have all escalated into violence. Some radical protestors have shortly occupied the Legislative Council, paralyzed the Hong Kong airport, pestered commuters on their way to work, burnt the national flag, tarnished the national emblem, attacked police or besieged police headquarters or residences, and damaged various public facilities. During the latest weekend, they vandalized the subway system, causing the MTR to stop operation for an entire day, and remains in half paralysis, seriously affecting people's need for public transport. If Morey knew of this aspect of the Hong Kong turmoil, which the American media have completely ignored, would he still fight for the "freedom" to wantonly sabotage human rights and the rule of law? Would he still stand with the violent protestors?

Then, which Hong Kong is true? Are media reports necessarily credible? Media reports certainly have their own stances and bias, but if readers are careful enough, and are willing to listen to different media outlets, they can see a whole picture, rather than become distracted by a few pieces of the puzzle. Hong Kong residents are no doubt very angry at the small number of opposition figures who repeatedly went to the United States to accuse the Hong Kong police and SAR government, as are the mainlanders. It was precisely because the opposition constantly sent out and amplified disingenuous voices that some Americans have been misled. From this perspective, Morey was misled by the media, and the Chinese people were angered by Morey.

The world is complex and plural. There may be diverse voices in each country and region, but some basic principles are observed by the majority of people. For instance, there is the so-called "political correctness" in America, the Hong Kong SAR may state its core values are freedom and the rule of law, and China may claim its own gene of political culture is safeguarding national unification. Whichever faith they commit to, as long as they are willing to know each other and respect each other, they can reach mutual understanding. For the Chinese, it would be enough if the world can be more objective and respectful in evaluating it, including Hong Kong.