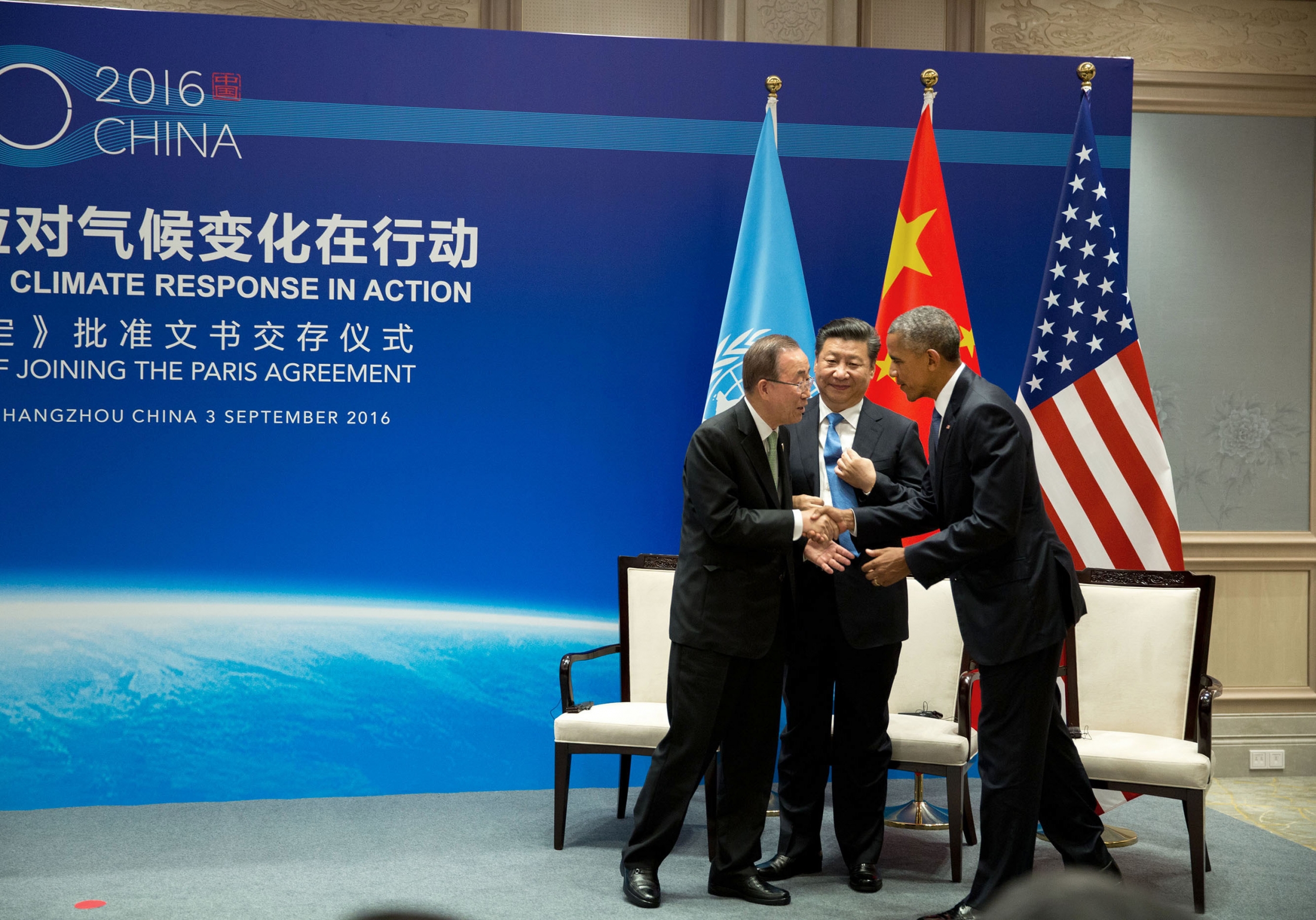 After signing the Paris Agreement in fall 2016, China announced in 2017 that it had already met its goal for 2020 greenhouse gas emission reductions, sparking hope that it would become a leader in climate change policy. At the same time, the U.S. withdrew from the Paris Agreement and halted federal efforts to address climate change under the Clean Air Act. The challenges Chinese President Xi Jinping faces in combating climate change are similar to those encountered by U.S. presidents Bill Clinton and Barack Obama, who both sought to tackle the issue during their administrations.

Though their political systems are very different, neither American nor Chinese leaders are able to pursue environmental goals at great expense to national or regional economies. For example, in 1997, the U.S. signed the Kyoto Protocol. However, it never became binding because the U.S. Senate would not ratify it because of two reasons. First, the agreement did not have binding commitments for developing nations, thus putting the U.S. at a competitive economic disadvantage. Second, the Democratic Clinton administration was not able to garner the support of Congressional Democrats from coal and agricultural states, who feared retribution at the ballot box when constituents felt their livelihoods were on the line.

President Xi is not balancing congressional politics, but rising energy costs for consumers and industries, increased regional job losses, and decreasing GDP may undermine the social stability he seeks to maintain. Because of this, Xi has expressed a vision of a future of green economic growth in which he will “aim to address climate change and over capacity.” The first greenhouse gas reductions were achieved by shutting down the least efficient coal burning steel plants that were contributing to a glut of steel; however, deeper cuts in steel plant production will be more difficult to achieve without regional job losses or economic consequences.

These constraints are also reflected in the current design of China’s carbon cap and trade program for the electric power industry that is set to be implemented in 2020. Tentatively, the plan will allot emissions by the amount of carbon dioxide a plant produces per unit of electricity produced, likely reducing the rate of increase in emissions and increasing the efficiency of plants but also allowing for overall increases in greenhouse gas emissions. Though slated as an environmental protection program, it is designed to enable economic growth and limit costs to industry, rather than stringently reducing overall greenhouse gas emissions.

The influence of industrial energy companies, such as natural gas and oil firms, to limit climate change action in the U.S. has been well documented. From funding campaigns to sow skepticism at climate science to lobbying against regulation, the power of the fossil fuel industry in U.S. climate change politics is a major reason for U.S. inaction. At first glance, Americans might think that the power of the fossil fuel industry would not be a similar factor in China, but that is not the case.

The difficulties of governing state-owned energy companies in China have driven a series of governmental reforms to target the power of these corporations in government. For example, the National Energy Administration (NEA) was established in 2008 as a department of the National Development and Reform Commission (China’s powerful economic planning arm, commonly known as NDRC). In 2009, the NEA noted that it did not issue any of the five certificates needed to operate a coal mine, citing a lack of resources and authority to influence major state owned energy companies like PetroChina and Sinopec. In 2010, the National Energy Commission (NEC) was created to address this problem. A new Ministry of Energy (MOE) was announced in March 2018 to replace the National Energy Administration. This moved energy policy out of the NDRC, and elevated such issues to the level of a ministry equal to the NDRC, so that energy regulation would not be dominated by the economic planning arm. How much oversight the MOE will have over China’s state-owned fossil fuel companies is still in question, but the shift may communicate a governmental awareness of these companies’ power and an opportunity for regulation.

Surveys show 94% of the Chinese public is more believe the climate is changing (compared to 70% of Americans) and 80% is very concerned about this (compared to 21% of Americans. In the U.S., public opinion is an important factor in policy because it can motivate voting, activism, and individual action to reduce greenhouse gas emissions. In China, public opinion mainly matters on an individual level as it may motivate citizens to reduce emissions in their household. However, some academics suggest the government is responsive to concerns, noting that progressive outlooks among the Chinese citizenry have yielded institutional change.

However, public opinion in China and the U.S. has something in common, which in both cases works to limit climate action: when respondents are forced to rank climate change with other national issues (such as economic growth or public safety) or with other environmental issues (such as clean air or water), it is often low or last on the list. Given China’s relatively recent experiences with “airpocalypse,” the public is highly concerned about air pollution. Multiple surveys have found that Chinese residents rank air pollution as the most serious of all environmental problems. One survey found that nearly 90% of respondents were willing to pay to reduce air pollution, and the average individual contribution is ¥382.6 per year. While this is encouraging, it is important to note that though most households were willing to pay something, the average annual household income was ¥105,000; making the average contribution just 0.3% of their income.

For now, the improvement of air quality is well aligned with greenhouse gas reduction. However, for China to reduce emissions enough to limit climate change, it will have to go well beyond more efficient cars and coal, or converting to natural gas. Decarbonization options include electric vehicles, expanding the nuclear energy sector, and heavy investment in carbon capture and storage. Whether public opinion will continue to support these measures once visible air quality has improved remains to be seen.

Though the situation in the U.S. is very different to that in China, they face similar challenges on climate change. Will President Xi have more success in overcoming these challenges and reducing greenhouse gas emissions than President Obama? Factors such as the lack of term limits, the nature of the one party state, and increased anti-corruption efforts at all levels of government suggest yes. If China’s leadership remains committed to reducing greenhouse gas emissions and is able to balance that commitment with competing interests like economic growth and energy independence, China may lead on climate change.

Climate ChangeEnvironmental Protection
printTweet
You might also like
Back to Top
CHINA US Focus 2023 China-United States Exchange Foundation. All rights reserved.