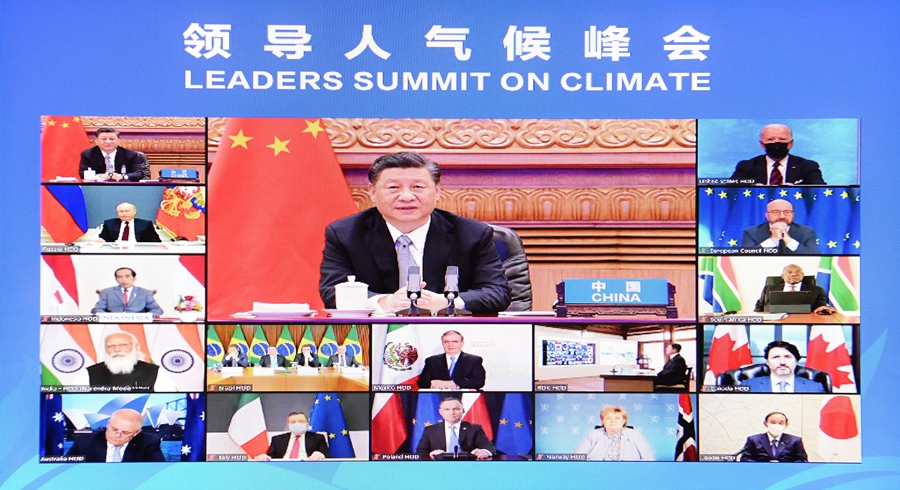 At the invitation of U.S. President Joe Biden, Chinese President Xi Jinping attends the Leaders Summit on Climate via video link and delivers an important speech titled "For Man and Nature: Building a Community of Life Together" in Beijing, capital of China, April 22, 2021. (Xinhua/Huang Jingwen)

April 22 was World Earth Day, and it was an unusual one, as the world is still fighting a crucial battle against the coronavirus pandemic.

During his political campaign for the White House, Biden stressed the need for the United States to lead the global climate governance process and made the climate issue his trump card. On his first day in office, he signed a series of executive orders and returned to the Paris Agreement. But he has not announced the 2030 targets of America’s national determined contributions, known as NDCs. The strategic purpose of the administration’s rush to convene a climate summit on Earth Day was to gain back the say and leadership in the climate governance process, thus promoting a new global carbon neutrality agenda under the banner of “climate justice" by riding on the crisis situation and the carbon neutrality trend.

John Kerry, Biden’s special presidential envoy for climate, talked about the critical role of the summit in helping the U.S. make up for lost time over the past four years and protect its role at COP26, to be held in Glasgow, Scotland, toward the end of the year. Bringing together allies and partners together concurrently with America’s return to the Paris Agreement — to shape a new international climate governance process and rebuild American leadership in the new global climate order — lies at the heart of the Biden strategy.

The Paris Agreement aims to hold the global average temperature increase below 2 C, or even better to below 1.5 C. As the Paris Agreement represents a bottom-up approach of emission reduction commitments in the form of NDCs, the 2-degree target offers greater development space for developing countries than the 1.5-degree one. The Biden administration, however, wanted to use the Earth Day Summit to apply the higher target of 1.5 degrees.

“If we want to prevent the worst consequences of the climate crisis, we have to limit the planet’s warming to 1.5 degrees Celsius,” Kerry told the Munich Security Conference earlier this year.

Given that the 1.5 C target is strongly supported by a group of small island states and that this year’s extreme weather disasters have magnified the international climate crisis, the U.S. will try its best to persuade participants to target 2 C instead of 1.5 C.

Gina McCarthy, the U.S. national climate adviser, said at a White House briefing on Jan. 27 that the new administration would make sure to announce the NDCs before the Earth Day summit. The U.S. had planned to unveil its new NDCs before COP26. To strengthen America’s position in international climate governance and its leverage over other countries, it’s highly probable that this will have occurred before the summit. Kerry also said recently that holding the global temperature increase within 1.5 C would be key to developing a road map to carbon neutrality by 2050. Therefore, the U.S. will anchor its NDCs to the 1.5 C level and promise carbon neutrality by 2050. It will then exert pressure on major developing emitters to do the same.

Since taking office, Biden has been planning to restart the MEF, initiated by former President Obama in April 2009. It involves 17 countries that account for 80 percent of the world’s total greenhouse gas emissions.

Kerry has on several recent occasions mentioned the MEF’s reactivation, saying that he and his team had been instructed by President Biden to hold a summit of all the world’s major emitters before April 22 and that the U.S. would specifically ask all the major emitters to increase their climate action ambitions when they go to COP26.

The MEF’s primary role was to coordinate major countries in advancing the Paris Agreement negotiations. Now the Biden administration is focusing on a broad global agreement on carbon neutrality targets, thereby gradually moving away from the principle of common but differentiated responsibilities of the Paris Agreement and the UNFCCC and imposing new restrictions on major developing emitters.

During a recent visit to the NATO headquarters, Secretary of State Antony Blinken called climate change one of the top three global crises facing the American alliance, and it necessitates a restructuring of the alliance system. While issuing the relevant executive order, Biden also stressed that “climate considerations shall be an essential element of U.S. foreign policy and national security.”

Rebuilding a green coalition to tackle the climate crisis will be a pillar of the administration’s effort to reshape the international system of power centered on climate security. To that end, Kerry traveled to London, Brussels and Paris in March to closely coordinate climate policy positions with Europe and on COP26 with the United Kingdom. Leaders of both parties in the U.S. also see the reestablishment of cooperation with Europe as underpinning American leadership in the global effort to deal with climate change and want to renew the climate ambition alliance with Europe.

Kerry also told the Munich Security Conference that Biden would coordinate policy positions with the G7, G20 and Arctic Council during the April summit. In addition, the administration plans to strengthen cooperation with India within the Indo-Pacific strategy framework.

Global climate security and climate governance are now at a critical stage. The international community needs to push for the full implementation of the Paris Agreement within the framework of the United Nations. China and the U.S. recently issued a joint statement addressing the climate crisis, injecting energy into the global climate governance process. The Earth Day summit should also promote the implementation of the Paris Agreement and the UNFCCC in accordance with the principles of equity, differentiated responsibilities and respective capabilities. Developed economies should take the lead, honor their own commitments and shoulder their historical responsibilities in cutting emissions, thus steering international climate governance toward equity and justice.

As mankind lives on the same — and only — planet, climate change poses the biggest common security threat of the 21st century. To overcome this enormous challenge, countries will have to promote global security, peace and sustainable development with a new vision of common, comprehensive, cooperative and sustainable security.

Climate SummitClimate ChangeSustainable Development
printTweet
You might also like
Back to Top
CHINA US Focus 2022 China-United States Exchange Foundation. All rights reserved.