Roughly $10 trillion per year, or 12% of the global economy, is now in play fighting climate change. Properly invested in zero emission energy, transport and business infrastructure of tomorrow, $10 trillion per year could create the future income streams needed to pay the health and retirement costs of an aging global population. 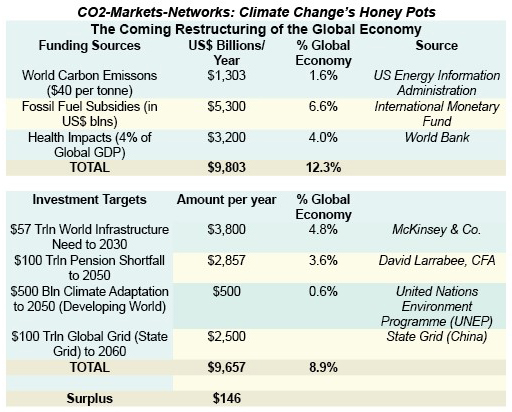 The first and most important step lies in taxing carbon and eliminating fossil fuel subsidies. This would free up $6.6 trillion a year, or nearly 8% of the global economy, for more productive uses. Fixing climate change also will reduce health costs by nearly $3.2 trillion a year.

That total of just under $10 trillion dollars is roughly the amount needed per year to revamp and upgrade the world’s roads, airports, trains and water supply systems. A separate $2.5 trillion a year could be used to update energy networks to deliver zero emission electricity from producer to consumer.

The savings from economic reform and reduced health costs can fund the infrastructure needs of a zero emission economy and meet looming social security obligations, with a small surplus left over. Humanity comes out ahead. While the above numbers are estimates, they represent the best estimates from the best minds. The picture they paint is unmistakable.

By contrast, leaving climate change unaddressed puts at risk as much as $24 trillion of economic assets. That’s nearly a third of global GDP and a multiple of the figures above. The political and economic roadmap of the 21st century is now clear. What’s needed is a huge, multigenerational fiscal stimulus of linked infrastructure investment and linkage to looming long-term social security payment schemes.

Over the short to medium term (now to 2030) large infrastructure and clean energy construction projects will spark economic activity throughout the global economy. This will stimulate employment and consumer demand and reflate the global economy.

Debt funding would be secured in whole or in part by claims on future cash flows. These cash flows in turn would pay the costs of a global population expected to rise from today’s 8 billion to 10 billion by 2050 and potentially 11 billion by 2100.

These would serve as the financial intermediaries for recycled carbon taxes and eliminated fossil fuel subsidies. Each country could pursue these measures at their own speed. The only truly global agreement required would be on technical standards for energy market interconnection. These largely already exist. The Internet is an example.

Key to the success of a future clean energy economy will be liberalization of energy markets. This means, in general terms, severing dedicated linkages between upstream, midstream and downstream markets to enable greater competition. The world would need to encourage, or mandate, ‘open-access, common-carrier’ operations of networks. This means requiring gas pipelines and power lines to set common tariffs applicable to all comers on a first-come, first-served basis, instead of restricting access to favored counterparties.

Systems like this already exist, for instance in the operation of the United States’ nationwide natural gas distribution system. Critical reforms along these lines also are underway in China.

There, electricity and gas infrastructure owners are being required to open them further to competition by enabling access at non-discriminatory prices. As this occurs, capital will flow to toward cleaner energy sources. This will create a positively-reinforcing circle.

In addition to spurring competition among energy producers and distributors, it will also create an infrastructure class capable of throwing of off the predictable cash flows needed to offset retirement payment needs.

Organizations ranging from the International Monetary Fund to the International Energy Agency now warn about the risks to the global economy from underinvestment. Another risk is malinvestment, for instance in short-lived Liquid Natural Gas infrastructure when pipelines represent a much more sensible option.

An integrated global natural gas/hydrogen pipeline and electricity infrastructure represents future proof investment. That’s because the system can enable allow transmission and storage of surplus energy either as electricity (for instance, through batteries, pumped hydro or compressed air) or in gaseous form (as hydrogen). This flexibility has enormous value.

The precedent for quick action exists. The first international subsea fiber optic cable (TAT5) was only laid in 1988, less than 30 years ago. Today, the globe is crisscrossed by fiber optic capacity unimaginable in 1988.

These fiber cables provide both the inspiration and the pathways for parallel trans-national infrastructure, like gas pipelines and electricity power lines.

Climate Change
printTweet
You might also like
Back to Top
CHINA US Focus 2020 China-United States Exchange Foundation. All rights reserved.