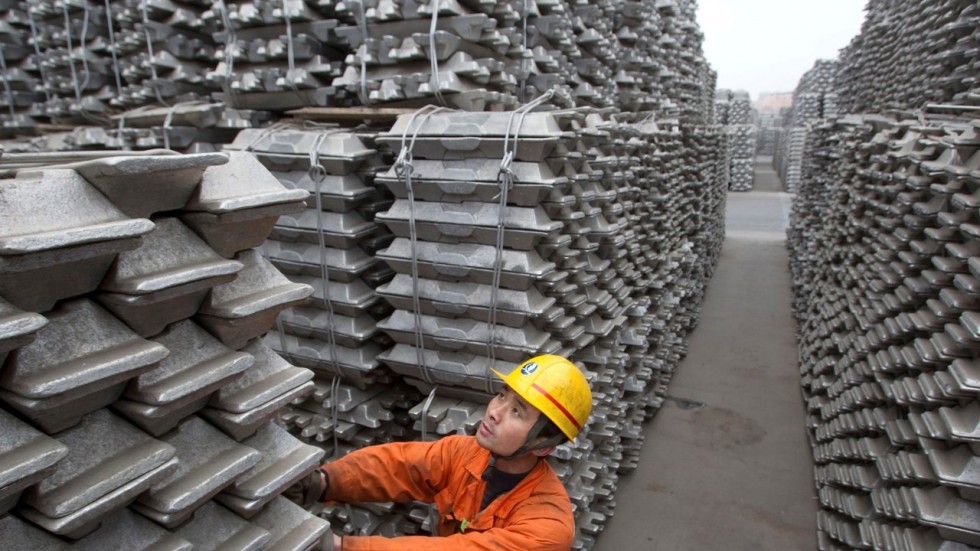 Following a trade investigation of imports, the U.S. Department of Commerce recently recommended imposing heavy tariffs or quotas on foreign producers of steel and aluminum in the interest of national security. Armed with steel and aluminum reports, Commerce Secretary Wilbur Ross stated that steel is vital to U.S. national security and current import flows are adversely impacting the steel industry.

Ross urged President Trump to take immediate action by adjusting the level of imports through quotas or tariffs. Trump is likely to invoke Section 232 of the 1962 Trade Act, which allows the president to impose tariffs without congressional approval. He must respond to the reports by April 11 and 19 for steel and aluminum, respectively.

China, the main target of the proposals (though a minor steel importer into the U.S.), contends that the U.S. already has excessive protections on domestic iron and steel products and it reserves the right to retaliate.

The proposed policy instruments suggest that the Trump administration is willing to subsidize American steel and aluminum, even at the expense of far bigger and more consequential U.S. industries – and world trade.

From Trade Expansion to Trade Contraction

While the proposed measures vary from broad adjustments that involve many countries to targeted adjustments that focus on a few countries, the rationale of the suggested figures is fuzzy and ultimately undermined by geopolitical considerations.

Nevertheless, President Trump is given substantial geopolitical leeway. He could have specific countries exempted from the proposed quota, based on U.S. economic interests or national security. Moreover, he could also take into account each country’s willingness to cooperate with the U.S. to address global excess capacity (read: turn against China) and other challenges that face the U.S. aluminum and steel industries.

This leeway permits Trump to seize unilateral geopolitical objectives to undermine any semblance of multilateral economic cooperation and to deploy the imperial “divide and rule” principle to play targeted countries against each other.

Ironically, President Kennedy used the Trade Expansion Act of 1962 to negotiate tariff reductions of up to 80 percent, which paved the way for the Kennedy Round of General Agreement on Tariffs and Trade ("GATT") negotiations that ended in 1967 and eventually led to the World Trade Organization (WTO) in 1995. In contrast, President Trump is exploiting the seldom-used Section 232 of the Act to increase trade barriers, in order to undermine or reverse 50 years of trade progress in just a few years.

In effect, Trump is trying to use the Trade Expansion Act for trade contraction.

Broadening the Scope of New Protectionism

In his campaign, Trump targeted those economies with which America has the largest aggregate trade deficit. In order to legitimize a trade offense, which has a highly questionable legal basis, he is starting by focusing on steel, but is expanding to aluminum. The ultimate objective is to target America’s deficit partners, however. The proposed measures are just a means to that final goal.

In 2017, U.S. imports increased 34 percent to $22 billion. The U.S. is the world’s largest steel importer. The top 10 source countries for steel imports represent 78 percent of the total steel import volume. Canada accounts for the largest share (16 percent) followed by Brazil, South Korea, Mexico and Russia (Figure a). Although China has a key role in the proposed tariffs and quotas, it is not even among the top-steel importers into the U.S. If the White House targeted its tariffs and quotas proportionately, it should hit its North American Free Trade (NAFTA) allies and trade partners in Asia hardest, which together account for half of all steel imports. 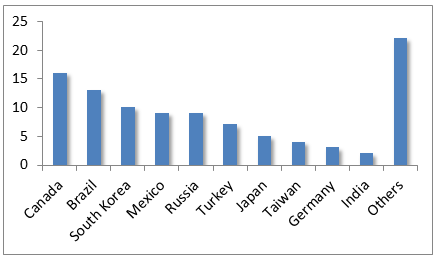 In 2017, U.S. aluminum imports increased some 31 percent to $13.9 billion, while U.S. production of primary aluminum decreased for the fourth consecutive year to the lowest level since 1951. Like in steel, Canada is the leading source of aluminum imports into the U.S., accounting for more than two-fifths of total imports by both value and weight in 2016. Imports from China amounted to only half of that, a slight decline from their 2015 levels. This contrasts with the Commerce Department’s claim that imports from China were significantly up (Figure b). 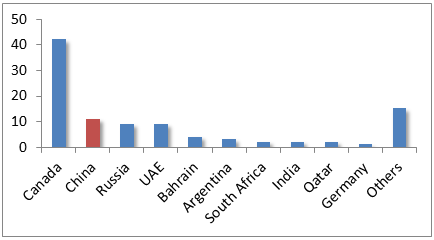 What are the economic realities of the U.S. trade deficits? In 2017, America incurred an $863 billion trade deficit (up 8.1 percent from 2016). The highest deficit was with China ($396 billion), followed by Mexico ($74 billion) and Japan ($72 billion). These are the countries that Trump is really after (Figure c). In order to achieve that objective, the White House seems to be willing to risk its economic and strategic cooperation with China, undermine ties with its NAFTA partners, alienate its European North American Treaty Organization (NATO) allies and undercut alliances with the rest of its trade and security partners in Asia. 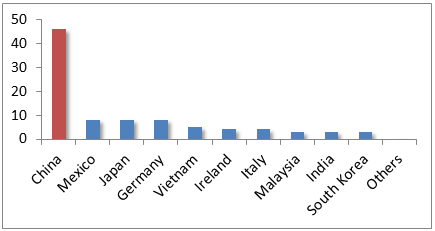 The record to date is distressing. Recently, the Trump administration announced tariffs on imported solar cells and modules, which protect a small number of U.S.-based solar manufacturers (including one Chinese-owned firm), while destroying some 23,000 American solar workers’ jobs. China has already retaliated. Moreover, South Korea is considering filing a complaint with the World Trade Organization if the U.S. levies heavy duties on steel.

In turn, Trump is likely to resort to Section 301 of the Trade Act of 1974 to unilaterally seek remedies for unfair Chinese trade practices, which will risk Chinese retaliation and a tit-for-tat trade war, just as the Tariff Act of 1930 did, with dark consequences. Such moves risk undermining not just international trade but the very institutions— trade-dispute resolution mechanisms— that support it.

Time to Apply the Right Lessons

Amid the world trade collapse in 2008, Jagdish Bhagwati published his Termites in the Trading System, which demonstrated how preferential agreements undermine free trade. Since the end of the Cold War, both Republican and Democratic leaders have moved toward such pacts. Until 2016, those moves were gradual and occurred one pact at a time. However, in the Trump era, the shift is disruptive and multilateral. Today, the international trading system is not threatened by little termites nibbling away walls, but a huge stealth termite— new protectionism— munching away the very foundations of world trade.

Steel and aluminum overcapacity crises are multilateral and have global repercussions, not bilateral as the U.S. measures imply. China’s rise has not come at the expense of the U.S. After the Cold War, the U.S. economy accounted for a fourth of global GDP. Today, the corresponding figure is about the same. Moreover, research indicates that U.S. job losses are the net effect of technology and automation, not just of offshoring to China, India and emerging economies.

Third, through the Silk Road initiatives (OBOR), Chinese overcapacity can serve industrialization in emerging economies that participate in these initiatives, which also offer opportunities to advanced economies.

Finally, any sustained success in overcoming the global steel and aluminum friction must be based on multilateral cooperation with all major producers, that will seek to reduce overcapacity in the largest producers but will also ensure emerging economies’ opportunities for rapid economic development in the future.

SteelAluminumProtectionismChina-US Trade
printTweet
You might also like
Back to Top
CHINA US Focus 2018 China-United States Exchange Foundation. All rights reserved. Disclaimer