The Indo-Pacific, which stretches from the United States west coast to the west coast of India, is a subject of great importance to American foreign policy. This region is one of the greatest engines…of the future global economy, and it already is today. And the American people and the whole world have a stake in the Indo-Pacific’s peace and prosperity. It’s why the Indo-Pacific must be free and open.

In his speech, Pompeo announced $113 million in new U.S. initiatives to “support foundational areas of the future: digital economy, energy, and infrastructure.” As he put it, the funds represent a “down payment on a new era in U.S. economic commitment to peace and prosperity in the Indo-Pacific region.”

While bypassing the specifics of where the money would come from, these remarks were designed to inspire comparisons with the postwar Marshall Plan and China’s One Belt One Road (OBOR) initiative. However, the scale of the U.S.’ Indo-Pacific Economic Vision pales in comparison with the OBOR. There are also valid concerns about U.S. financing capacity in the foreseeable future – not just in Asia, but at home.

All Trump initiatives are overshadowed by America’s massive twin deficit. The federal budget deficit for fiscal 2019 is almost $1 trillion. Despite Trump’s trade wars, the trade deficit increased by more than 12% in 2017 to $570 billion, the largest deficit since 2008.

Earlier this year, President Trump announced his highly-anticipated domestic infrastructure plan, the $1.5 trillion infrastructure initiative. The goal is to provide $200 billion over the next 10 years for infrastructure replacement and modernization projects across the U.S., which would be paid for by unspecified cuts in the federal budget.

In his 2016 campaign, Trump pledged to set America on a more financially sound and responsible course. Yet, instead of contributing to a credible, bipartisan and medium- to long-term debt-cutting program, the administration is taking on historical levels of new debt. Today, U.S. debt exceeds $21.3 trillion, which amounts to 105% of the U.S. gross domestic product (GDP).

Both the Indo-Pacific Strategy and the OBOR have been compared with the postwar Marshall Plan. There are parallels, but the differences matter even more.

While there is no consensus on exact historical amounts, the Marshall Plan’s cumulative aid may have totaled over $12 billion (more than $100 billion in today's dollar value.) Consequently, Trump’s much-touted Indo-Pacific Strategy represents less than 10% of the value of the Marshall Plan. Most importantly, both of these efforts pale in comparison with the OBOR, which involves far greater cumulative investment, currently anticipated to be in the range of $4 trillion to $8 trillion, depending on differing estimates of timelines and scenarios (Figure 1). 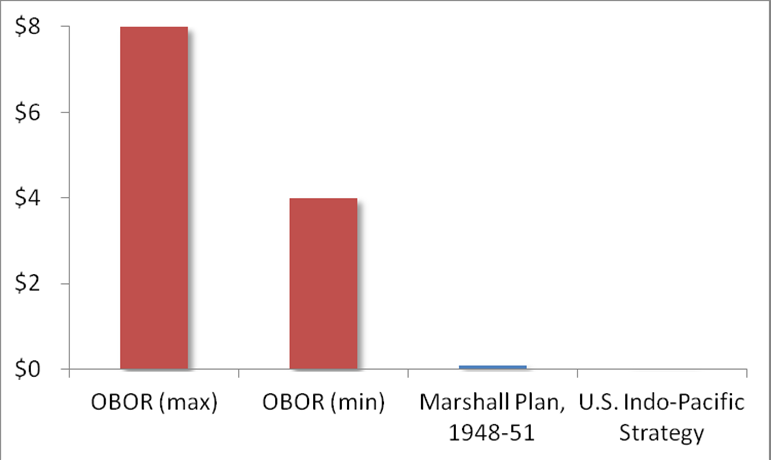 The three initiatives can be differentiated according to the value of their estimated investment, but also by strategic objectives, underlying military frameworks and anticipated duration (Figure 2).

Beginning in 1948, the Marshall Plan was created to help rebuild the war-torn economies of postwar Western Europe. However, it was not philanthropy. After 1945, the United States was the world’s largest exporter and dominated much of the global economy – but it could not trade without customers. While Europe’s largest economies desperately needed American goods and services, they did not have the dollars to purchase them. The Marshall Plan served as a seed fund that allowed Europe to get back on its feet, while sustaining U.S. economic strength in the immediate postwar era.

Accordingly, the Marshall Plan’s timeline was limited, lasting roughly three years. In contrast, the timeline of the OBOR is likely to be one to three decades. The former sought to fuel European reconstruction using U.S. dollars. The latter seeks to promote industrialization and economic development, predicated on a far longer time-frame. Indirectly, it will contribute to renminbi internationalization, while reducing Chinese excess capacity in multiple sectors, such as steel, cement, coal and shipbuilding.

Ultimately, the Marshall Plan was designed not just to support European recovery, but to contain the Soviet Union in the Cold War, which was vital to the Pentagon. In light of the Obama pivot to Asia (predicated on the shift of 60% of U.S. warship capacity to the Asia Pacific by 2020) and the Trump administration’s 2017 National Security Strategy, the strategic objective of the Indo-Pacific Vision is somewhat similar. From Washington’s perspective, it is not just a competitive alternative to China’s OBOR initiative, but a geopolitical tool that, if needed, can be used to contain China economically and strategically.

In contrast, the OBOR is mainly economic by nature. It offers massive seed funding and infrastructure assistance to accelerate industrialization in economies that were once colonized by the major European powers, the United States and Japan – mainly emerging and developing economies which thus far have been unable to fully modernize.

Third, the Marshall Plan did speed up European postwar recovery but it was predicated on participation in the U.S.-led North American Treaty Organization (NATO). Some 75% of the total aid went to just five countries: the UK, France, West Germany, Italy, and the Netherlands, which also became core NATO members. Unlike the Marshall Plan, the OBOR does not predicate participation in or tacit support of military alliances; it is not necessary for countries to join, say, the Shanghai Cooperation Organization (SCO). The OBOR is focused on 21st century economic development, not on the 20th century Cold War.

It is this aspect – the hope for a better future – of the OBOR that remains most underestimated by the White House.

The Need for Inclusive Economic Development

For all practical purposes, the Trump administration’s Indo-Pacific Strategy is a rehash of several ideas that former Secretary of State John Kerry introduced in 2013 when the idea of the Indo-Pacific Economic Corridor was conceptualized.

As for the potential future impact of the Indo-Pacific Vision, in the most benign scenario, the initiative will shed its geopolitical pretensions and focus instead on economic development, led by three key partners: the United States, Australia and Japan. In a less benign scenario, the interests, values and strategic objectives of the initiative’s leading major advanced economies will, once again, overshadow the values and interests of the emerging Asia Pacific economies. Moreover, geopolitics rather than best-practice development principles will determine the allocation of investment and project timelines.

According to the Asian Development Bank (ADB), infrastructure needs in the developing Asia Pacific will exceed $22.6 trillion through 2030, or $1.5 trillion per year. With costs related to climate change mitigation and adaptation factored in, this is more likely to come to over $26 trillion, or $1.7 trillion per year.

What the Asia Pacific needs is a sustainable, long-term plan for accelerated economic development – not new geopolitical divisions.

Indo-PacificU.S.-China Rivalry
printTweet
You might also like
Back to Top
CHINA US Focus 2022 China-United States Exchange Foundation. All rights reserved.