Innovative Cooperation at the APEC Summit 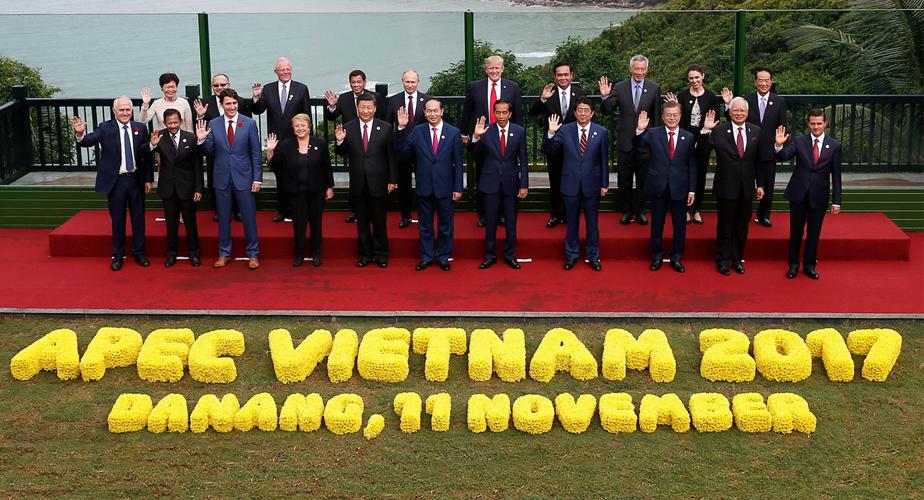 The 25th APEC Economic Leaders’ Meeting was concluded in Da Nang, Vietnam on 11th November. Leaders at the summit recommit themselves  to APEC’s mission of promoting regional economic integration, developing multilateral institutions and free trade, and fostering new growth drivers to support inclusive growth and prosperity in the Asia-Pacific.

The Leaders’ summit reiterated support for multilateralism, open markets, and innovative growth in order to promote inclusive development. Nevertheless, summit was not without jarring notes, reflecting APEC members’ diverging views on issues like globalization and regional integration, and trade liberalization versus protectionism.

After the 2008 financial crisis, summits like the G7, the G20, and APEC resulted in shared declarations of opposition to trade protectionism. However, the rise of nationalism and populism seen in events like Brexit and Donald Trump’s election have boosted protectionism worldwide. Whenever the U.S. appeared at multilateral summits, trade protectionism in the name of “fair trade” would loom large.

The Da Nang APEC summit was no exception. During the ministerial meetings, the U.S. championed the self-serving U.S. version of “fair trade”, without regard to the development needs of other economies. It ignored the fact that the countries of the Asia Pacific region are developing fast and need flexible arrangements instead of rigid mechanisms. Protectionism found its way into the ministerial meeting statement, including in the usual expression of opposition to protectionism an opposition to “all unfair trade practices” at the U.S.’ bequest. As the U.S. dug in its heels, the ministerial meeting statement was postponed by two days. Commercial hegemony has come to the fore in U.S. trade policy.

It is not surprising that Japan, though still a close ally to the U.S. militarily, insisted on using APEC as a platform to advancing TPP11, and strove to reach a framework agreement on a compromised version called “CPTPP”. It reflects Abe’s dissatisfaction towards Trump’s trade policy. As a founding member of APEC, Japan deviating from the main theme of the APEC meeting, working to mobilize TPP11 members to advance the TPP agenda. Due to the absence of Canadian Prime Minister Justin Trudeau, the TPP11 meeting was only held at the ministerial level. Desperate for an agreement without the U.S., TPP terms were watered down, with over 20 provisions shelved. Japan and the U.S. have conflicting interests on trade, with competition outweighing shared interests.

Abe has seen his dream of presiding over a 21st century international economic order with the U.S. shattered. For four years, Abe put all his eggs in the TPP basket. When Trump came into office, he threw the basket to the ground. During Trump’s visit to Beijing, China and the U.S. broke new ground on trade cooperation, thanks to a creative effort to bring their businesses together to sign deals. This presents a stark contrast to Japan-U.S. trade relations in the 20th century. There will be no Plaza Agreement moment for China and the U.S. When the two juggernauts join hands, Japan fears being dislodged. Abe pathetically chased the Obama administration on TPP only to lose the leading role in East Asian economic cooperation. A prosperous Asia Pacific for all must be driven by interconnected development. In 2014, China set out a blueprint for this with its Belt and Road initiative, which will also boost regional integration in all other aspects. From the Beijing Roadmap to the Lima declaration, an Asia Pacific free trade zone is in the making, which will serve to unlock regional potential and deliver the dividends of multilateral cooperation and economic integration. APEC espouses diversity, promotes growth and heralds an era of open, inclusive, interconnected and shared development. At the APEC meeting in Da Nang, President Xi Jinping emphasized that all countries in the Asia Pacific should focus on innovation driven development, remain committed to opening up, and strive for inclusive development to promote common prosperity.

APECChina-US-Japan RelationsTrump China Visit
printTweet
You might also like
Back to Top
CHINA US Focus 2018 China-United States Exchange Foundation. All rights reserved. Disclaimer