Redefining Economic Relations Between China and US 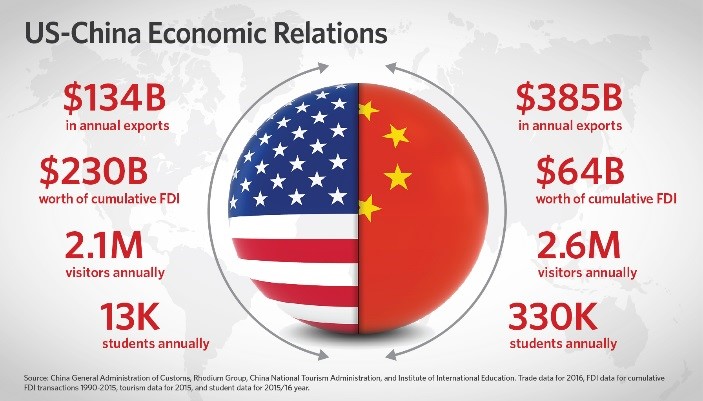 Economic and trade relations are the mainstays of the China-US relationship. They are one of the key variables in building a new type of major-power relations, and they are the driving force behind sustainable development for both countries. Strengthening China-US economic and trade cooperation is the correct strategic choice. China and the US – the world’s largest developing country and largest developed country – comprise the world’s largest market, accounting for 40% of the world’s economic output, 25% of its trade, and 30% of its outward and inward foreign direct investment (FDI). They are also each other’s most important trading partners. As the world’s most important economic relationship, greater economic and trade cooperation between China and the US has a significant bearing on global economic stability, growth and prosperity now and in the future.

Both countries are in a new historic stage of development, and the meeting between President Xi and President Trump at Mar-a-Lago in the US was a good beginning in promoting relations. Under the China-US Comprehensive Economic Dialogue Mechanism, both sides have implemented the 100-Day Economic Plan to promote the healthy and stable development of economic relations. Work teams from both countries have already engaged in 30 rounds of consultations and reached ten important consensuses. This initial success was achieved in areas including agriculture, trade, financial services, investment and energy.

At the heart of China-US cooperation is the pursuit of mutual benefit. Bilateral trade is an area where their common interests intersect broadly and deeply, and their economies are already interdependent in some ways. The significant complementarity that exists in economic and trade relations between China and the US constantly increases the benefits to both countries. Over the past 30 years, since the establishment of diplomatic relations, the two sides have reaped enormous dividends from trade and economic development. Bilateral trade has grown rapidly, from $2.5 billion in 1979 to $519.6 billion in 2016, an increase of 207 times, and China is already the largest trading partner of the US and its largest source of imports. In the last decade, US exports to China increased an average of 11% each year, while Chinese exports to the US increased by an average of 6.6% annually. US trade with China supports a lot of jobs in the US. According to US statistics, exports of goods and services to China supported an estimated 910,000 jobs in 2015 (601,000 by goods exports and 309,000 by services exports). Oxford Economics  estimates that Chinese imports boosted US GDP by 0.8% in 2015, supporting 1.8 million jobs. It also found that China has become an important force in promoting US technological innovation, and that US products have benefitted from China’s enormous consumer market.

The US is China’s largest export market and one of its most important sources of foreign investment. In 2016, there were 67,000 projects involving US investment in China, with actual FDI of $79.86 billion, accounting for 7.8% and 4.5% of approved FDI from foreign-invested enterprises and actually utilized FDI, respectively. Moreover, US-invested enterprises in China have made significant contributions to Chinese employment, tax revenues and economic growth. According to the Global Value Chain and China’s Trade in Value Added Accounting Report issued by the Ministry of Commerce, together with the General Administration of Customs, National Bureau of Statistics and State Administration of Foreign Exchange, in 2012, every $1 million of exports to the US supports 59jobs in China. The continued development of China-US economic and trade relations, therefore, greatly benefits the people of both countries.

How China and the US can achieve a new balance in their economic and trade relationship is a crucial issue for both parties. Obstacles still exist, and the potential for trade frictions or a trade war remains. Relations should not center or be based on balancing trade, but should focus on opening up new areas of trade in the future, creating a more even playing field, and gradually eliminating structural distortions. The two sides should draw up common goals for the future and identify areas to develop economic and trade cooperation, in order to increase the potential for improving bilateral relations.

Constructive realism is required to achieve the common mission of China and the US. Both countries are important global systemic economies that possess broad potential for cooperation in the future. Their economic and trade relations should transcend the 100-Day Economic Plan and promote implementation of a post-100-day plan. In terms of broad prospects for cooperation, they should deepen industrial cooperation to promote the integration of a range of high-quality factors of production and innovative resources. China and the US should also relax restrictions on high-tech exports to promote greater cooperation between their high-tech markets, which would surely benefit both sides. Both countries need to gradually eliminate barriers to investment and also scrap various discriminatory investment policies, opting instead for policies that treat all investors equitably. They need to work together to improve the business environment, review national security and protect intellectual property, and to make rules more transparent and fair. They also need to restart negotiations on a China-US bilateral investment treaty (BIT) as quickly as possible; promote greater market openness on both sides; explore the best methods for creating a negative inventory system and relevant high standards; start negotiations on a wide-ranging bilateral investment and trade treaty (BITT) when conditions are ripe; accelerate development of a system for China-US infrastructure investment, the Asia Infrastructure Investment Bank and other multilateral development financing systems; and help develop and broadly cooperate with third-party markets under the framework of the Belt and Road Initiative.

Future China-US relations will be one of the profound changes and challenges to affect this era. If China and the US can work together, they can build a new world order based on growth and cooperation, and their collaboration can serve as a new model for the provision of global public goods. Economic and trade relations between these two great nations is moving toward benign interaction, and the likelihood of an all-out trade war has diminished significantly. Nevertheless, the complexity and longevity of this new type of economic relationship between the two major powers depends on vital bilateral and multilateral mechanisms to facilitate regular consultations and communication and to help achieve breakthroughs.

Tweets by ChinaUSFocus
China-US Economic RelationsXi-Trump Summit
printTweet
You might also like
Back to Top
CHINA US Focus 2018 China-United States Exchange Foundation. All rights reserved. Disclaimer