The Aspiration for Asia-Europe Connectivity Reaching across Continents 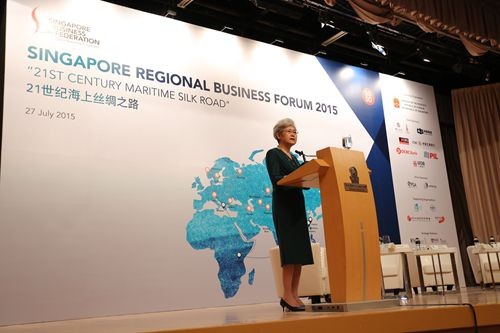 It’s my great pleasure to be invited to speak at the Singapore-China Business Forum. Let me commend the organizers for taking this timely and important theme.

Singapore has always kept its finger on the pulse of region, including China. I am glad it is again at the forefront of such a major regional undertaking.

As you may know, two years ago, President Xi Jinping of China proposed the Silk Road Economic Belt and the 21st Century Maritime Silk Road Initiative. And this has since attracted much attention, discussion and interest.

In March this year, the Chinese Ministry of Foreign Affairs, the National Development Reform Commission and the Ministry of Commerce jointly released a document entitled “Vision and Actions” to outline Chinese thinking on how to implement this grand initiative.

For centuries the historical Silk Road has connected Asia and Europe by land and by sea. The new proposal of China, while reviving the ancient concept of Silk Road, aims to carry forward the spirit of peace, cooperation, openness and inclusiveness, for shared benefits.

Naturally, it takes time for people to fully take in a big idea. You know this initiative is translated into English as “the Belt and Road Initiative”.

Many times when I was asked to explain it, the first question would be: why and how China wants a belt built on land and a road built in the sea?

You see, the challenge starts early at choosing a good translation that can capture the world’s imagination.

As I understand it, what the Chinese President talked about is connectivity programs both within Asia and between Asia and Europe, both by land and by the sea, and both by means of strengthening traditional infrastructure and through building highways of trade, finance, and cultural exchange to strengthen connectivity.

There is already warm response from more than 60 countries and a number of international organizations. And there are ongoing discussions at bilateral, multilateral and regional levels on how to take the initiative forward through concrete projects, such as the China-ASEAN upgraded FTA, The Bangladesh-China-India-Myanmar economic corridor, dovetailing with Eurasian Economic Alliance, and the setting up of the AIIB and dovetailing with many other domestic programs. 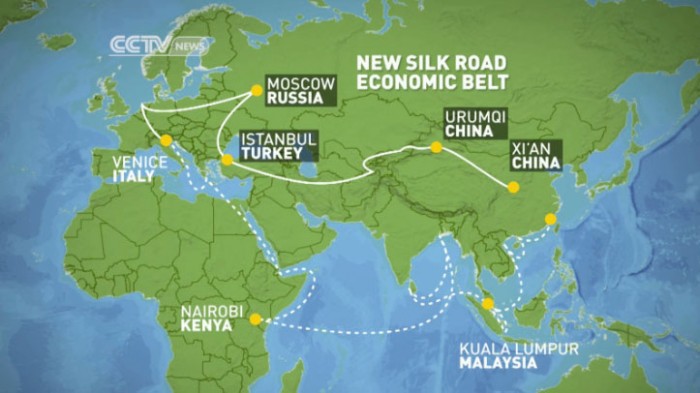 I. The Aspiration for Asia-Europe Connectivity

Now, let me go back a bit about why Asia-Europe connectivity.

To connect Asia and Europe from Atlantic to Pacific through land has long been a dream and the two continents have made many attempts over the past one hundred years.

In the 19th century, for example, Russia built the trans-Siberia railway, successfully connecting the Baltic Sea to the Pacific, which is known as the northern line. However, that railway was more for security purposes and brought little economic benefits.

The second line was in the center. In 1990, the railway in China extended through the extreme end of Xinjing Autonomous Region to Kazakhstan, connecting from Lianyungang port on China’s Pacific coast all the way to Rotterdam, which is called the second Eurasian Bridge.

I myself made a field trip to Alashan Pass in the mid 1990s and found that because the rails on the Chinese side and those on the other side of Kazakhstan were not of the same gauge, goods brought by trains had to be moved from one train of one gauge and loaded to another train of another gauge. I saw lines of trains waiting to be unloaded and loaded. This made the concept of connectivity more academic than real in those years.

The third line is in the south. Quite a few railway lines were constructed within China from north to south, the idea of connecting China and Southeast Asia all the way to Malaysia, and from Singapore all the way to India has never been fully realized.

The dream to connect Asia and Europe has remained alive all these years. I remember in the 1990s, some European scholars proposed the Eurasian Land-Bridge plan with an exciting map.

Last May, when I was attending a Silk Road forum in Yiwu, I came across Madam Helga Zepp-LaRouche and found in her book that exciting map of 1991 illustrating the plan, which made young diplomats like me very excited in those years. I think European countries’ recent support for AIIB is probably deeply rooted in this very dream of Eurasian connectivity.

In the 1990s the Asian Development Bank also proposed a series of Asia infrastructure network programs. The Kunming-Bankok Highway was built by joint efforts of ADB and China, Laos and Thailand together.

However, while those grand ideas would occasionally come up at discussions by ASEAN and China at official and academic levels over the years, they would have to wait for the right conditions and the right vision.

For a start, there was no sufficient capital to undertake such a grand project and technology was not up to the required level. More importantly, China itself did not have the necessary infrastructure network at that time to make Eurasia connectivity work, to support it from the center.

Twenty years on, those two constraints have more or less disappeared. On the vast land of China, we have built a network of highways and the world’s longest high speed railways.

More importantly, China has come a long way in terms of economic strength, captial and technology. It is in this context that China put forward such a big initiative not only for further development in China but more importantly, for a higher level of growth in Asia and beyond. 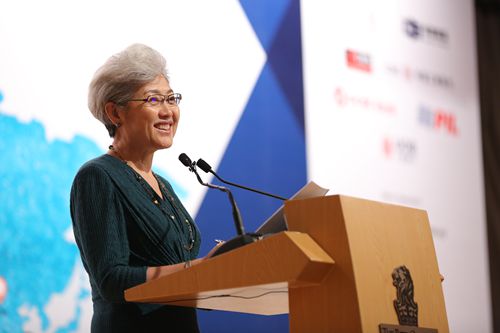 II. All-round connectivity promotes peace, stability and economic prosperity of the region and beyond.

Singapore sits on the world’s most vital arteries of trade between Asia and Europe. It is poised to play a very important part by virtue of being a gateway.

As we all know that most Asian countries are less prosperous inland than the coastal regions. The lack of transportation and development facilities leave many people behind including among the Southeast Asian countries as well as in the vast region of China’s west and the vast and very important region lying between China and Europe. Poverty leads to instability and engenders problems such as human and drug trafficking and terrorism, etc.

China is both a land and maritime country. Its inland area is four times as big as the eastern region but lags far behind. But the potential is also huge. Take the west China, which lies at the center of Eurasian continent, has better advantage moving southwards and westwards.

Likewise, other maritime countries like Indonesia and Malaysia also need to improve connectivity inland so as to allow them to catch up with the new wave of growth in Asia.

By developing more arteries for connectivity, we should be able to build new blood vessels of development for disadvantaged economies in Asia’s hinterlands to create prosperity and opportunities and improve the competitiveness of the whole region.

III. Connectivity programs will be the new driving force for cooperation.

China is now the No. 1 trading partner of most Asian countries. I also noticed that among countries which support the initiative, their trade with China has mostly been growing by double digits. We hope when the initiative is translated into more cooperation projects in those countries, trade will grow further.

Take Singapore for example, China and Singapore are not only important trade partners. Two-way investment has also grown with a strong momentum. Singapore has turned into China’s top foreign investor in the last two years. Chinese investment in Singapore is also picking up.

So I’m sure that this momentum will be reinforced by the implementation of the Silk Road Initiative.

In the wider context, generally speaking, Asia is yet to tap its full potential.

In China, we say that connectivity is the shortcut to prosperity and that is also what we experienced. Now China would like to share this experience crucial to success with other countries. Chinese companies are capable of providing high quality, low cost and affordable infrastructure projects. They are already active in the region. According to the Ministry of Commerce, between January and May this year, Chinese companies signed up more than 1,000 projects in countries under the Silk Road initiative, half of the total value of new overseas projects undertaken by Chinese companies in the whole world.

In many ways Singapore has a crucial role to play. Let me list a few. Singapore, as an important navigation, shipping and logistics center with advanced infrastructure, can be an important transit point and service provider for the maritime and land Silk Road programs.

Second, Singapore is an important financial center and the second biggest offshore RMB clearing center. This puts Singapore in a better position to provide trade, financing and investment services for the region.

Third, Singapore will be the country coordinator for China- ASEAN relations for the next three years. We count on Singapore to facilitate in such important undertakings as the upgraded China-ASEAN FTA, and RCEP, and working towards an Asia-Pacific FTA. We would also look to Singapore in leading regional connectivity projects.

At the moment, China and Singapore are in discussions about launching a new flagship project on connectivity and modern service industry in west China. This will definitely strengthen Singapore’s ability to join the Silk Road development on land as well.

Any good initiative needs to be tested in its implementation. The Asia-Europe connectivity is also confronted with difficulties and challenges.

First, we need to build understanding. Admittadly, It’s always been a challenge for China to communicate its thinking and ideas to the outside world. There is of course language difficulties. It’s also a challenge to put conceptualized initiatives into more concrete ideas. Furthermore, to promote better understand, China should also listen more to its neighbors. And this Silk Road initiative is an open and inclusive program geared toward common development from day one, it is therefore important to nurture the comfortable level of trust in order for the initiative to be successful.

Second, we need to be aware of security and other risks. Especially infrastructure projects are normally long-term and slow to show return. The success of projects depends entirely on the sovereign countries for ensuring the necessary environment and conditions while the companies themselves should base their decisions on proper risk assessment. Of course, good connectivity programs will also, in return, reinforce stability.

Third, we need to allow the companies and the market to determine what to do and what not to do, as connectivity programs concern specific projects, and economic viability holds the key to their success. What governments can do is to provide policy guidance and legal ground and the necessary facilities.

The list of challenges may go on. But the warm response we’ve seen to the initiative speaks to the keen interest. The fact that today so many delegates are gathered here. I hope I’m not overstating to say that the region has never been so united and so full of hope for connectivity in all fronts and at all levels. Should we achieve the success of the Silk Road initiative, it will not only create new development opportunities but also prosperity for hundreds of millions of people. So to end my speech, let me echo the Chairman of the forum by saying “Let’s work together”.

Thank you very much.