Complacency Will Be Tested in 2018 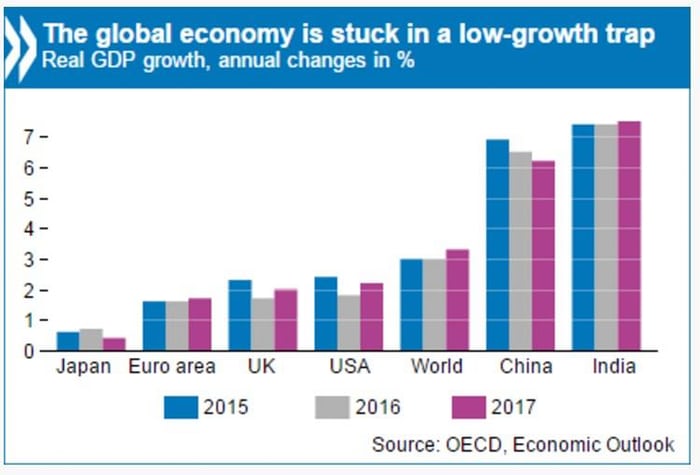 After years of post-crisis despair, the broad consensus of forecasters is now quite upbeat about prospects for the global economy in 2018. World GDP growth is viewed as increasingly strong, synchronous, and inflation-free. Exuberant financial markets could hardly ask for more.

While I have great respect for the forecasting community and the collective wisdom of financial markets, I suspect that today’s consensus of complacency will be seriously tested in 2018. The test might come from a shock – especially in view of the rising risk of a hot war (with North Korea) or a trade war (between the US and China) or a collapsing asset bubble (think Bitcoin). But I have a hunch it will turn out to be something far more systemic.

The world is set up for the unwinding of three mega-trends: unconventional monetary policy, the real economy’s dependence on assets, and a potentially destabilizing global saving arbitrage. At risk are the very fundamentals that underpin current optimism. One or more of these pillars of complacency will, I suspect, crumble in 2018.

Unfortunately, the die has long been cast for this moment of reckoning. Afflicted by a profound sense of amnesia, central banks have repeated the same mistake they made in the pre-crisis froth of 2003-2007 – maintaining excessively accommodative monetary policies for too long. Misguided by inflation targeting in an inflationless world, monetary authorities have deferred policy normalization for far too long.

That now appears to be changing, but only grudgingly. If anything, central bankers are signaling that the coming normalization may even be more glacial than that of the mid-2000s. After all, with inflation still undershooting, goes the argument, what’s the rush?

Alas, there is an important twist today that wasn’t in play back then –central banks’ swollen balance sheets. From 2008 to 2017, the combined asset holdings of central banks in the major advanced economies (the United States, the eurozone, and Japan) expanded by $8.3 trillion, according to the Bank for International Settlements. With nominal GDP in these same economies increasing by just $2.1 trillion over the same period, the remaining $6.2 trillion of excess liquidity has distorted asset prices around the world.

Therein lies the crux of the problem. Real economies have been artificially propped up by these distorted asset prices, and glacial normalization will only prolong this dependency. Yet when central banks’ balance sheets finally start to shrink, asset-dependent economies will once again be in peril. And the risks are likely to be far more serious today than a decade ago, owing not only to the overhang of swollen central bank balance sheets, but also to the overvaluation of assets.

That is particularly true in the United States. According to Nobel laureate economist Robert J. Shiller, the cyclically adjusted price-earnings (CAPE) ratio of 31.3 is currently about 15% higher than it was in mid-2007, on the brink of the subprime crisis. In fact, the CAPE ratio has been higher than it is today only twice in its 135-plus year history – in 1929 and in 2000. Those are not comforting precedents.

As was evident in both 2000 and 2008, it doesn’t take much for overvalued asset markets to fall sharply. That’s where the third mega-trend could come into play – a wrenching adjustment in the global saving mix. In this case, it’s all about China and the US – the polar extremes of the world’s saving distribution.

China is now in a mode of saving absorption; its domestic saving rate has declined from a peak of 52% in 2010 to 46% in 2016, and appears headed to 42%, or lower, over the next five years. Chinese surplus saving is increasingly being directed inward to support emerging middle-class consumers – making less available to fund needy deficit savers elsewhere in the world.

By contrast, the US, the world’s neediest deficit country, with a domestic saving rate of just 17%, is opting for a fiscal stimulus. That will push total national saving even lower – notwithstanding the vacuous self-funding assurances of supply-siders. As shock absorbers, overvalued financial markets are likely to be squeezed by the arbitrage between the world’s largest surplus and deficit savers. And asset-dependent real economies won’t be too far behind.

In this context, it’s important to stress that the world economy may not be nearly as resilient as the consensus seems to believe – raising questions about whether it can withstand the challenges coming in 2018. IMF forecasts are typically a good proxy for the global consensus. The latest IMF projection looks encouraging on the surface – anticipating 3.7% global GDP growth over the 2017-18 period, an acceleration of 0.4 percentage points from the anemic 3.3% pace of the past two years.

However, it is a stretch to call this a vigorous global growth outcome. Not only is it little different from the post-1965 trend of 3.8% growth, but the expected gains over 2017-2018 follow an exceptionally weak recovery in the aftermath of the Great Recession. This takes on added significance for a global economy that slowed to just 1.4% average growth in 2008-2009 – an unprecedented shortfall from its longer-term trend.

The absence of a classic vigorous rebound means the global economy never recouped the growth lost in the worst downturn of modern times. Historically, such V-shaped recoveries have served the useful purpose of absorbing excess slack and providing a cushion to withstand the inevitable shocks that always seem to buffet the global economy. The absence of such a cushion highlights lingering vulnerability, rather than signaling newfound resilience – not exactly the rosy scenario embraced by today’s smug consensus.

A quote often attributed to the Nobel laureate physicist Niels Bohr says it best: “Prediction is very difficult, especially if it’s about the future.” The outlook for 2018 is far from certain. But with tectonic shifts looming in the global macroeconomic landscape, this is no time for complacency.

GDPGlobal Economy
printTweet
You might also like
Back to Top
CHINA US Focus 2018 China-United States Exchange Foundation. All rights reserved. Disclaimer