The “Catfish Effect” in the International Financial System 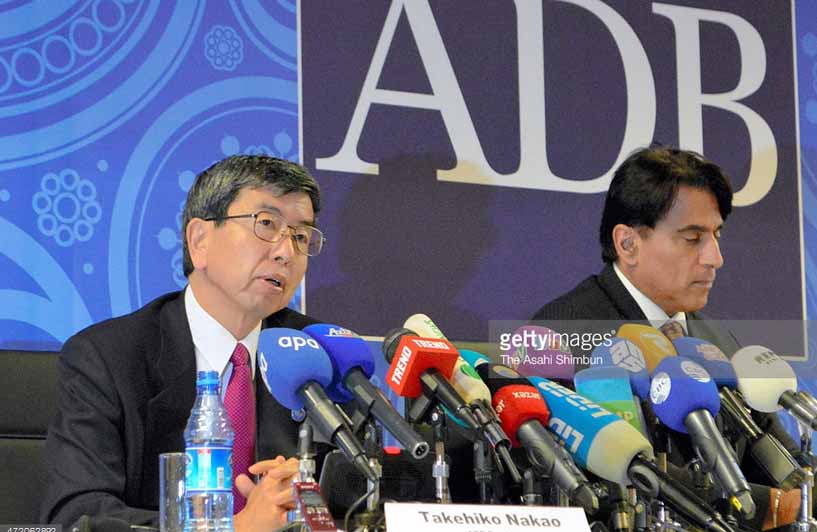 Takehiko Nakao (L) president of the Asian Development Bank, explains the bank’s plan to boost its annual lending during a press conference after the first day of the annual meeting of its Board of Governors on May 2, 2015 in Baku, Azerbaijan. In a collaboration of two potential rivals, the Asian Development Bank is set to provide joint project financing with the China-backed Asian Infrastructure Investment Bank and expand its annual credit line by 50 percent to 20 billion U.S. Dollars in 2017. (Photo by The Asahi Shimbun via Getty Images)

Recently, the creation of Asian infrastructure investment bank has become the focus of international media. Not because this bank announces the arrival of a new era, but because despite the opposition of the United States, their European and Asian allies were quick to join this initiative launched by China. Is this a sign of the decline of the United States who no longer has the final say for their allies? In any case, this is the warning given by Larry Summers, former U.S. treasury secretary and former economic adviser to President Obama. Mr. Summers criticized the position of the U.S. government as incapable of providing international public goods and to offer this opportunity to China.

Officially, China launched its initiative to establish an infrastructure investment bank in 2014, and about twenty Asian countries immediately responded positively to this initiative. In October of last year, they signed a memorandum in Beijing and set the end of March 2015 as application deadline to join the bank as founding members.

The attitude of Asian countries towards the creation of a new bank reflects the enormous needs of Asian infrastructure investment. Indeed, people were talking about the rise of Asia in the global economy since the end of last century, and the 21st century has been qualified as the Asian century. But to maintain the pace of economic growth in Asia, many Asian countries have experienced the bottleneck that is the imperfection of their infrastructures. It is estimated that the need for infrastructure investment in Asia would be about $8 trillion in the years to come, say an average of $750 billion per year. The existing regional and global financial institutions, such as the Asian Development Bank and World Bank, couldn’t do much, because the Asian Development bank’s credit capacity is only $13 billion per year, and it has many other things to do, such as poverty reduction, for example. The World Bank is also in a similar situation.

To some extent, the operation of the Asian Development Bank, World Bank, or the International Monetary Fund is obsolete, for they can no longer meet the needs of new emerging economies and don’t reflect today’s global economy. Take the case of the Asian Development Bank, for example. China’s voting rights within this bank is only a third of Japan’s, while in terms of GDP, China already doubles Japan. Even if the U.S. Congress approves the amendment to the IMF, which is not very probable, China’s voting rights would only be a third of the United States, whereas according to the purchasing power parity calculated by the IMF and the World Bank, China in terms of GDP surpassed the United States in 2014. Among such circumstances, how do you want China not to take any initiative to create new international financial institutions, and to be content to sit idly in existing international financial institutions? Given the results of infrastructure construction in China in recent years (9 of the 12 largest bridges in the world, the longest railway for high speed train in the world, etc.), and its huge foreign currency reserves (about $4 trillion), China is able to spread its infrastructure construction capabilities outside its territory. The creation of this new Asian infrastructure investment bank would also benefit the projects of the construction of the Silk Road economic belt and 21st century maritime Silk Road, another Chinese initiative of great interest both in Asia and Europe.

That said, international public opinion is very surprised that despite the U.S. warning not to share the Chinese initiative, many European countries have chosen apply for membership before the end of March deadline. Indeed, the European countries are traditional financial powers and they do not want to miss the Asian growth train. By participating in the infrastructure investment bank, European countries can not only benefit financially, but also gain access to the huge market of infrastructure construction in Asia. Moreover, the participation of European countries gave more credibility to the new bank, which could lower the cost of financing, if she wanted to start borrowing on the international capital market. So it is a win-win situation. More and more voices are rising within the U.S., criticizing the U.S. government’s position with regard to AIIB, and urging it to change its position and join the AIIB, even if only for improving the AIIB’s operations.

Although China does not claim to want to compete with the Bretton Woods system, by creating the Asian Infrastructure Investment Bank, and pretend only to supplement the existing international financial institutions, some commentators have pointed out that the new bank would have a “catfish effect” in the current international financial system. The legend goes that in Norway, live sardines are several times more expensive than frozen ones, and are valued for better texture and flavor. But only one ship could bring live sardine home, and the shipmaster kept his method a secret. After he died, people found that there was one catfish in the tank. The catfish is a carnivorous fish, as it keeps swimming, and the sardines try to avoid this predator, that makes sardines more active so that they can survive the long journey. The “catfish effect” is used to describe a situation where a strong competitor might cause the weak to better themselves. The creation of AIIB would force other international institutions, such as the World Bank, regional development banks, etc, to become more competitive and more efficient, which would also be a good thing for global governance.