U.S.-China Trade Relations Are At Their Most Precarious 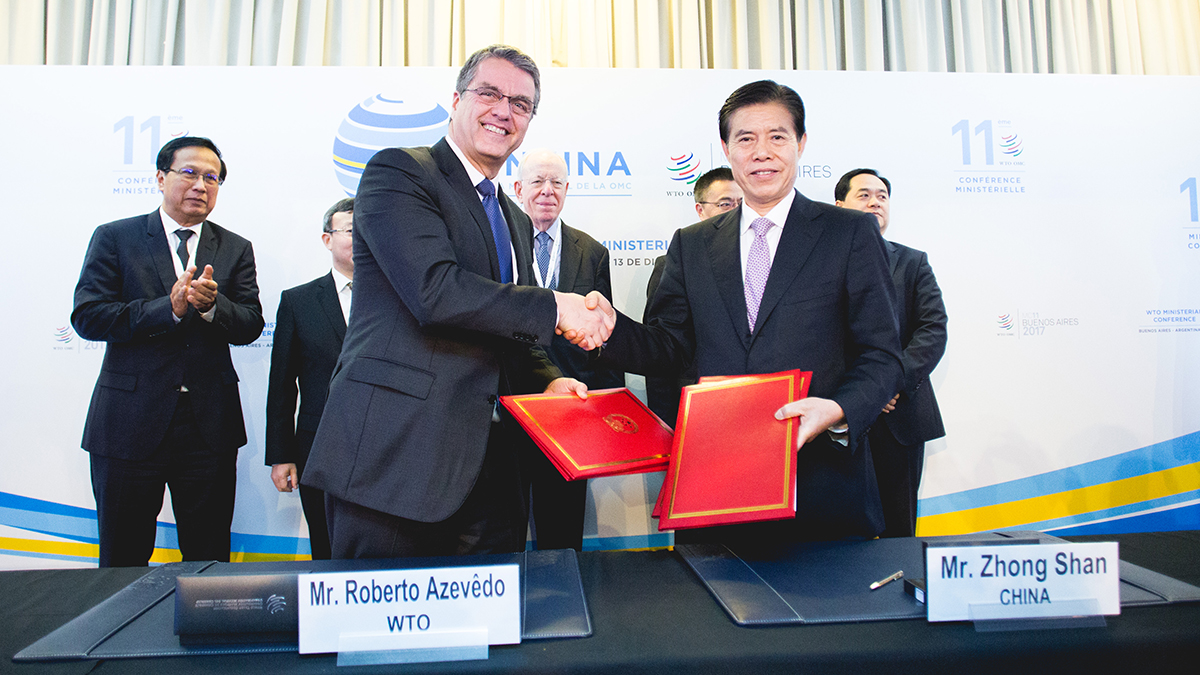 Although U.S. President Trump appears to have changed his tune on China from all-out accusatory on the campaign trail to grumbling in the Oval Office, U.S.-China economic relations are at their most precarious in years. The issue of trade is a major stumbling block between the two nations, and recent opposition to a Chinese bid for market economy status within the World Trade Organization (WTO) epitomizes the conflict. The outlook for trade relations between the two countries is bleak as long as the U.S. continues to focus on the bilateral trade deficit.

Under President Trump, the U.S. has been attempting to reduce the trade deficit with China, which Trump views a major stumbling block to better trade relations. It appears to have become a moot point that Trump’s understanding of trade economics is mistaken, even though economists have repeatedly stressed in response to Trump’s statements that a trade deficit does not represent economic losses of one country to another. The question has now shifted to whether Trump has been successful in “making a deal” with China to reduce the bilateral trade deficit.

China has agreed to increase imports from the U.S., and is particularly interested in purchasing more high-tech goods from America and gaining deeper U.S. participation in its One Belt One Road project. China also stated that it would reduce tariffs on automobile imports and has agreed to open its financial sector to greater foreign competition. For its part, the U.S. has made little attempt to reduce purchases of goods from China outside of the steel and iron industries. U.S. imports represent the largest component of the trade deficit, as consumers buy inexpensive products made in China in order to maintain their standard of living. This latter is something that President Trump understands least: that trade works in both directions, and is mutually beneficial between nations.

A more serious matter is related to China’s bid for market economy status. China’s dispute with the European Union over market economy status within the WTO has been colored by America’s support for the E.U. against granting this status to China. In a third-party brief to the WTO submitted last month, the U.S. wrote that China’s heavy government involvement in the economy has prevented China from reaching market economy status. State provision of subsidies and price controls, the U.S. argues, prevent China’s economy from arriving at market prices of production and output in some sectors, creating an unfair advantage in world trade.

There is some merit to the arguments made by the U.S. While China has vastly reduced price controls and subsidies since its entry into the WTO in 2001, these continue to exist. Price controls on coal, cotton, and gasoline persist, while subsidies on wheat, metals such as steel and iron, and new energy vehicles boost production in these sectors. Price controls and subsidies provide Chinese producers with a cost advantage in manufacturing goods for export, which may result in the dumping of cheaper Chinese goods on foreign markets. By preventing China from holding market economy status, the U.S. keeps open the door for antidumping duties to be placed on Chinese goods deemed discriminatory.

There is also some hypocrisy in the arguments made by the U.S., as the nation continues to subsidize its own agricultural sector. This has in the past been a major point of contention with developing countries, which struggle to compete with subsidized commercial agricultural produce from wealthier nations. While the U.S eliminated agricultural export credits after 2015 as part of a WTO agreement, farmers continue to receive government support if they do not meet revenue targets or if prices are lower than expected.

The U.S.-China trade relationship is, to some extent, irrationally biased against China and lacking in strong leadership. President Trump accomplished little on his China visit, largely failing to represent U.S. business interests which have called for expanded market access and stricter intellectual property rights protections.

While the Comprehensive Economic Dialogue (CED) mechanism has continued under Trump, the meeting held this July resulted in very little, as the U.S. pushed China to reduce its trade surplus by specific numbers. Afterward, each side cancelled a press conference and failed to deliver a joint statement. It is unclear how successful future dialogues will be if the U.S. continues to focus on the trade deficit issue and also fails to take responsibility for its bilateral trade deficit with China.

The relationship at present is cordial at best, certainly better than the destructive interaction candidate Trump promised on the campaign trail, but lacking in clear and prudent direction. If, over time, President Trump fails to tone down his emphasis on the trade deficit, or if the WTO rules that China is a market economy, relations between the U.S. and China can be expected to deteriorate.

China-US TradeTrump and China PolicyWTO
printTweet
You might also like
Back to Top
CHINA US Focus 2018 China-United States Exchange Foundation. All rights reserved. Disclaimer